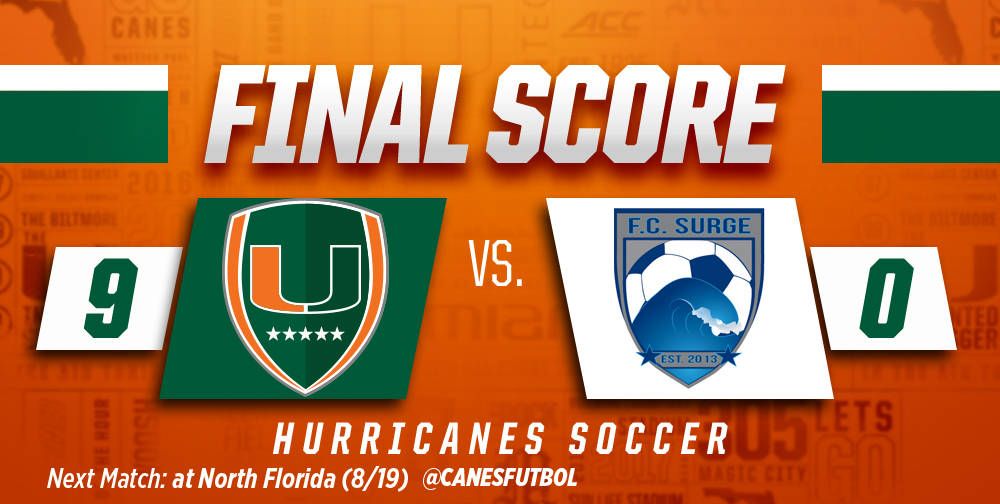 “I think it was just a great opportunity to play against a good team, in Miami, and our attacking personalities executed what we asked them to do,” Miami head coach Mary-Frances Monroe said. “We had a lot of chances on goal. We definitely could’ve finished many more, but it’s a great learning experience for our attack.”

Junior forward/midfielder Grace Rapp got the scoring started for Miami with an unassisted goal in the 19th minute, beating Johanna Rathbun with a strike from distance.

Castellano, who scored the match-winner in the Hurricanes’ 2-1 victory Thursday at UCF, tallied her first goal on a header off a corner kick by senior defender Emily Auld in the 24th minute. Freshman midfielder Lauren Markwith finished off a pass from freshman forward Dejah Cason in the 32nd minute to make it 3-0.

Miami’s fourth and final goal of the first half came in the 40th minute when sophomore midfielder Jamie Brunworth played the ball from the end line into the box to Castellano, who found the back of the net.

At the end of the first half, Miami had a 19-0 edge in shots, including a 10-0 lead in shots on goal. The Hurricanes also held a 7-0 edge in corner kicks over FC Surge, a Women’s Premier Soccer League team consisting of, for this match, former college players.

Fisher logged her first of three second half goals in 66th minute, just three minutes after FC Surge notched its first and only shot of the match. Senior midfielder/defender Gianna Dal Pozzo played the ball to junior forward Ronnie Johnson in the box and she sent it to Fisher, who scored.

In the 73rd minute, Fisher picked up an assist on a goal by senior forward Gracie Lachowecki, a 2015 Second Team All-ACC selection. The Jupiter, Fla., native then scored similar back-to-back unassisted goals, in the 79th and 82nd minutes, in which she dribbled past Rathbun and scored, earning her hat trick.

Castellano completed her hat trick and finished off a stretch of five goals in 18 minutes for the Hurricanes when she received a pass from Brunworth and beat Rathbun from the top of the box in the 84th minute.

Seven of Miami’s goals and two of its seven assists—16 points, in total—came from its freshman class in the win.

“I think it’s great just to build their confidence because we get into our conference play, the level is going to be so high,” Monroe said of the group’s success. “This was a great game for us going into non-conference games and I hope this continues to give our freshmen, sophomores and our entire team confidence in their abilities.”

Miami outshot FC Surge, 30-1, and did not concede a shot on goal or a corner kick, while finishing with 19 and eight, respectively, of its own.

Markwith and redshirt freshman defender Camie Kelton both earned their first playing time as Hurricanes in the 9-0 victory, which was the team’s last test before the regular season begins.

“I’m really excited,” Monroe said of the start of the season. “We have worked so hard in the spring with our returners. And then, [with us] having such a wonderful freshman class come in and compete to start, compete to get minutes, I think it’s going to be a great season for us.”

Miami is set to open up regular competition action Aug. 19 at 7 p.m., on the road at North Florida.