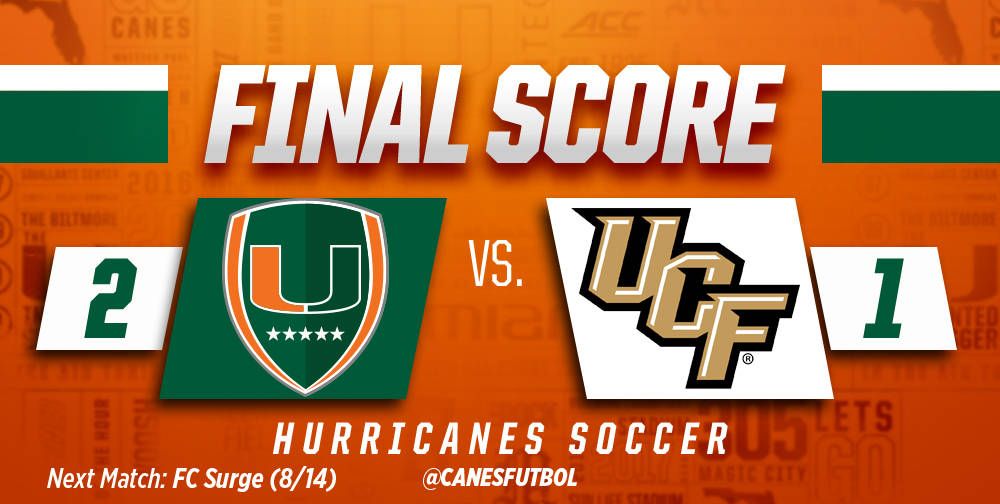 ORLANDO, Fla. – A road deficit through two-thirds of the match did not deter the University of Miami soccer team in its first action of 2016 Thursday night at UCF Soccer Complex.

In a season-opening exhibition affair, the Hurricanes used goals from junior forward Ronnie Johnson and freshman midfielder Lexi Castellano in a span of five minutes and 40 seconds to take down UCF, 2-1.

“The environment tonight was fantastic,” Miami head coach Mary-Frances Monroe said. “To have the opportunity to compete against [a team] of UCF’s caliber in a preseason exhibition under the lights is exactly what you want. We have put in a lot of tactical work and I am so proud of our performance.”

The Knights, who went 12-6-2 and participated in the NCAA Championship in 2015, tallied the first goal of the match on the contest’s opening shot in the 11th minute. Junior midfielder/forward Christine Creighton received a pass from sophomore midfielder Carrie Lawrence and beat Miami redshirt sophomore goalkeeper Phallon Tullis-Joyce with a long shot to the far post.

On Miami’s first shot of the contest, Castellano very nearly found the equalizer, but her strike deflected off the post. Instead of the Hurricanes’ opening shot of the contest being the one to tie the score, it was their first attempt of the second half that did so.

Just over two minutes after being substituted back in, Johnson pulled Miami level with a shot from distance that went over UCF sophomore goalkeeper Vera Varis head and into the back of the net. The Oakville, Ont., native’s tally made it back-to-back years she has scored Miami’s first exhibition goal.

Following Johnson’s unassisted finish in the 67th minute, Castellano gave the Hurricanes the lead on their very next shot, just under six minutes later. After controlling a cross from freshman forward Bayleigh Chaviers in the center of the box, Castellano sent the ball past Varis, putting Miami in front, 2-1, in the 72nd minute.

“We did a great job of keeping the ball and created many scoring chances for a stint,” Monroe said of the stretch during which the Hurricanes scored both their goals. “I was very happy executed on them.”

Tullis-Joyce, who finished with three saves, made a pair of stops in the final 16 minutes and the Miami defense blocked another UCF attempt, helping the Hurricanes hold strong to earn the road victory.

The Hurricanes will wrap up their exhibition slate Sunday at 1 p.m., when they host FC Surge of the Women’s Premier Soccer League at Cobb Stadium.