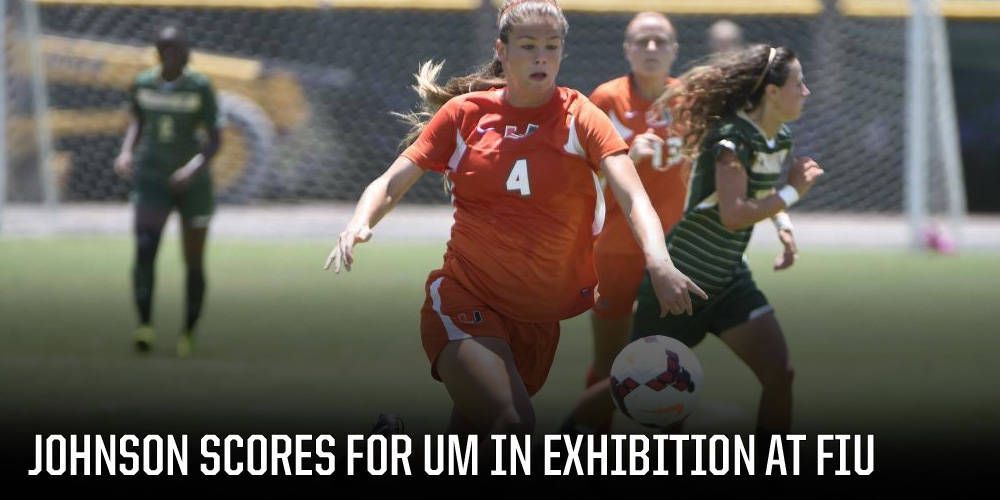 MIAMI – The University of Miami soccer team led FIU 1-0 when play was called due to weather nearly 44 minutes into the exhibition match Thursday night at FIU Soccer Stadium.

“Although the weather wasn’t ideal with the delays, I was proud of the way our group maintained focus,” Coach Mary-Frances Monroe said. “Erin played a great service into Ronnie, who capitalized on a great goal-scoring opportunity. After this shortened game, we are looking forward to getting back out on the field at Stetson on Sunday.”

Perez fended off a pair of early shots from the Panthers as FIU’s Madlen Weinhard and Lyrik Fryer each had a shot on goal in the first six minutes of play.

Just three minutes later, though, Miami took the 1-0 lead as McGovern threaded a through ball to Johnson, who took the keeper one-on-one from the 18, scoring Miami’s first goal at the nine-minute mark. In an attempt to equalize, FIU’s Alyssa Robinson was denied a goal as Miami’s defense tackled the ball out of play.

At the 10-minute mark, sophomore Grace Rapp attacked the FIU goal with a header that hit the post, then one minute later had a second attempt that sailed high of the goal. After a pair of corner kicks and a shot attempt by Amy Schmidt that was blocked, FIU went on the attack with a pair of shots, the first being blocked and the second saved by Perez in goal.

At the 23-minute mark, Johnson had another on-goal attempt, but FIU’s keeper Sophia Trujillo was there for the save, holding the score at 1-0 Miami.

Perez, who started for Colombia in the 2015 FIFA Women’s World Cup in June, made three saves over the next three minutes to keep FIU off the scoreboard as the game was halted for a second lightning delay, and an early conclusion to the first half. After the delay, the teams played two more minutes before another lightning strike and a decision to end the game.

In the weather-shortened, 43:53-minute game, Johnson took three shots, two of which were on goal, Rapp had two shot attempts, and Amy Schmidt attempted one shot.

The contest was the first of two exhibitions for Miami this season, as the team travels to DeLand, Fla., to take on Stetson Sunday at 1:00 p.m.

Miami, under the direction of third-year head coach Mary-Frances Monroe, returns eight starters from 2014 and welcomes a talented eight-member recruiting class into the fold.

Six current Hurricanes logged at least 15 starts in Miami’s 18 matches last season, including three who opened all 18 on the field.

The Hurricanes’ top six players in points are back from the 2014 campaign. That group includes Moik, who led the way in points, goals and shots, and McGovern who paced the team in assists.

To track the Hurricanes throughout the 2015 season, follow @CanesFutbol.