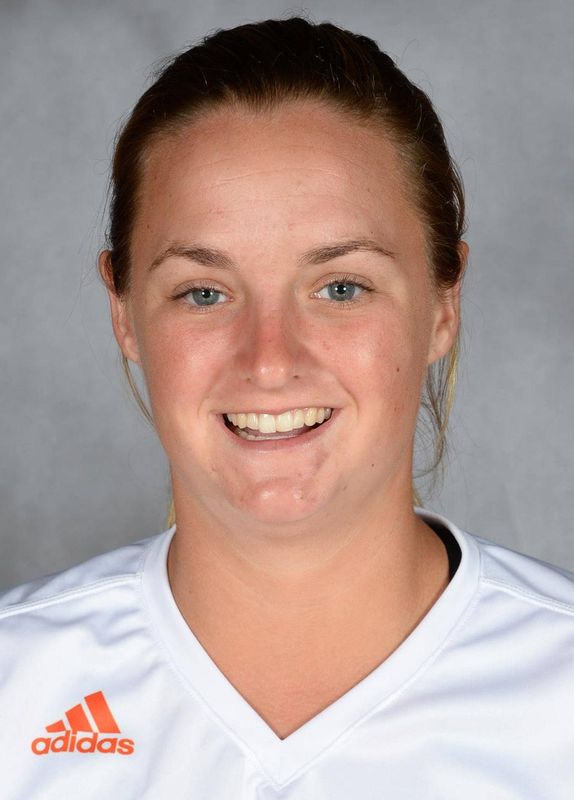 2015 (Senior): Played in all 17 matches, one of six Hurricanes to do so, and made 15 starts … Started each of the first nine contests and ranked fifth on the team in games started … Recorded four goals, six assists and 14 points, finishing second on the team in all three categories … Registered 18 shot attempts, including eight on goal … Earned 967 minutes of playing time … Played over 60 minutes 10 times, including a career-high 84 at Virginia Tech (10/17) … Ranked No. 10 in the ACC and tied for No. 83 nationally in assists per game (0.35) … Tied for No. 10 in the ACC in total assists (six) … Tallied the first assist of her career on Miami’s go-ahead goal in the 56th minute against No. 14/10 Florida (8/27) … Against UCF (8/30), scored the second goal of her career in the 83rd minute and logged her second-career assist on Miami’s equalizer in the 87th minute … Recorded the first multi-goal game of her career with a brace in Miami’s victory at Jacksonville (9/6), also finishing with five shots attempts and a match-high three shots on goal … Led all players with three shot attempts in the win at FGCU (9/11) and assisted on the lone goal of the match … Scored a goal on a penalty kick and recorded an assist in Miami’s victory over North Florida (9/13) … Logged an assist on the Hurricanes’ 106th minute golden goal in the win against No. 14/4 Notre Dame (10/2) … Tied for the team lead with two shot attempts against Duke (10/8) … Assisted on Miami’s match-equalizing goal in the victory over NC State (10/11)  … Tallied a team-high three shot attempts against No. 8/5 North Carolina (10/31).

2014 (Junior): Saw action in 15 matches, including four starts … Served as one of team’s most active forwards … Started three of final four matches … Finished with four shots and two shots on goal…Registered one shot against both Virginia Tech (10/9) and Notre Dame (10/12) … Had season-high two shots against North Carolina (10/26) … Delivered season-high 66 minutes against Tar Heels.

High School: Named to the Kansas City Star’s 2011 All-Sunflower League Second Team … Helped guide Shawnee Mission West to the State 6A semifinals as a junior, scoring two goals in the quarterfinals … Played a key role in the team’s run to the championship in 2011, where the Vikings fell to former Miami teammate Emily Lillard’s Blue Valley Northwest squad … Team finished 18-2-1 in her junior campaign.

Personal: Parents are Jim and Jennifer… Has two older sisters, Noelle and Beth, and one younger sister, Heidi … Intends to major in sport administration.