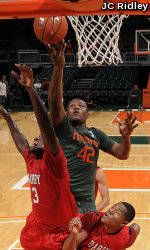 Hurricanes Head to No. 19 Memphis for Midnight ESPN Game

The game will be broadcast live on ESPN and simulcast online at ESPN3.com. ESPN’s annual celebration of the opening of college basketball season will broadcast 20 live games – 19 men’s and one women’s – in a minimum of 25.5 hours across ESPN, ESPN2, ESPNU and ESPN3.com. Games are scheduled to tip off every two hours, beginning with the Hurricanes versus the Tigers at midnight.

Monday marks the 12th meeting between the programs and the first since Dec. 21, 2000, when Miami defeated Memphis, 66-57, at home. Although the Tigers hold the one-game series advantage, 6-5, the Hurricanes have won three of the last four meetings between the programs – including two of their last three games at Memphis.

Seventh-year head coach Frank Haith has led Miami to 22-straight non-conference regular-season wins, dating back to Dec. 6, 2008, when UM knocked off perennial power Kentucky in Lexington. The Hurricanes have won nine-straight regular-season games versus non-conference opponents away from home, including four on their opponents’ home court.

FedExForum is a daunting location for any opponent, however the Hurricanes have earned numerous noteworthy road wins under Haith, including the program’s first victories at the Dean Dome and Rupp Arena. In addition, Haith’s Hurricanes have won at Madison Square Garden and on tough home courts at Florida and Mississippi State.

Last Friday’s starting backcourt of Malcolm Grant (23 points) and Durand Scott (20 points) scored 43 of the Hurricanes 89 points on 15-of-26 shooting in the 89-77 season-opening win over Jacksonville. Grant set career highs in points (23), steals (3) and field goals made (7), while tying his high in three-point field goals made (4). With his fourth 20-point performance as a Hurricane, Scott has now scored in double figures in nine of his last 10 games.

Friday was the first time the Hurricanes have had two players with 20-plus points since a Jan. 1, 2009 victory over Florida Atlantic (Dwayne Collins — 24 pts, Jack McClinton — 20 pts), and marked just the third time since the return of the Miami basketball program in 1985-86 that more than one Hurricane scored at least 20 points in a season opener.

Miami also has had five players score in double figures (Grant, Scott, Reggie Johnson, Adrian Thomas and Julian Gamble) in Friday’s opener for the first time since a Dec. 21, 2009 win versus North Carolina A&T (Grant — 14 pts, Collins — 13 pts, Scott — 13 pts, James Dews — 10 pts, Cyrus McGowan — 10 pts). It also marked just the third time that five-or-more Hurricanes posted double-figure points in a season opener since the return of the men’s basketball program in 1985-86. Miami had six players with double-figure scoring in a 104-61 season-opening win over Florida Southern on Nov. 9, 2007, and in UM’s 108-80 season-opening defeat of Maryland-Eastern Shore on Nov. 25, 1988.

Miami improved to 7-0 in season openers under Frank Haith with its sixth straight season-opening win by double digits.

Memphis, ranked No. 19 in the country in both preseason polls, returns to competition following Friday’s 104-40 season-opening win over Centenary. Five Tigers finished in double-figures in the blowout victory, including a game-high 17 points from Antonio Barton and 16 points from Chris Crawford, who converted all six of his field goals – including going 4-of-4 from long range. As a team, Memphis shot 55 percent from the field, 51.9 percent from beyond the arc and 72.7 percent from the line, while forcing 28 Centenary turnovers.

Memphis, picked to win Conference USA in most preseason publications and websites, returns two starters and six letterwinners from last year’s squad that went 24-10 and advanced to the NIT’s second round. The Tigers finished second in the Conference USA regular season standings (13-3) and reached the quarterfinals of the C-USA Tournament.

Entering his sixth year as a Hurricane, Adrian Thomas was the ACC’s leader in three-point field goal percentage (.421) in 2010. Going 4-for-9 from beyond the arc in Friday’s win over Jacksonville, Thomas has now hit a three in 48 of his last 53 games — including in 12-straight for the longest active streak in the ACC.

Former Hurricane men’s basketball standout Jimmy Graham registered his first NFL touchdown on Sun., Nov. 7, to help the New Orleans Saints knock off the Charlotte Panthers, 34-3, in his home state of North Carolina. A four-year letterwinner in hoops for the `Canes (2005-09) — still ranking eighth all-time in career blocks (104), Graham played football for UM as a graduate student in 2009, was drafted in the third round and is a rookie tight end for the Saints.