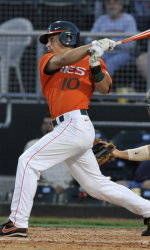 TALLAHASSEE, Fla. – No. 6 Florida State scored three runs in the eighth and two more in the ninth to claim an 8-7 win over No. 9 Miami Saturday afternoon at Dick Howser Stadium.

Trailing by one in the bottom of the ninth, FSU loaded the bases with no outs on a single, a walk and an error before Stuart Tapley hit a double to straight-away center to bring in the game-tying and game-winning runs to even the series.

Miami jumped out to a 7-2 lead after five innings but unlike Friday night, the Hurricanes’ bullpen was unable to hold the lead, allowing a combined six runs in 4+ innings. Daniel Miranda (3-2) suffered the loss with his first blown save, allowing the two ninth-inning runs.

Starter Eric Erickson allowed two runs on three hits while striking out one in four innings before Jerad Grundy came on to start the fifth. UM used six relievers for the second straight night – starting with Grundy and ending with Miranda.

Miami’s six through nine hitters went a combined 9-for-18, including Nathan Melendres, who went 3-for-5 with three RBI and a run scored. Chris Pelaez also had three hits, going 3-for-5 with two runs scored and a run batted in. Stephen Perez (2-for-5, one RBI) and Yasmani Grandal (2-for-3, one run) also finished with multiple hits as the `Canes out-hit FSU, 13-to-9, on the afternoon. Miami did however strand 12 runners on Saturday, similar to FSU’s 13 left-on-base in Miami’s game one win.

Daniel Bennett (3-1) earned the win for the Seminoles after getting the final two outs in Miami’s ninth. FSU starter Brian Busch gave up four runs on six hits while walking three and striking out five. He was relieved by Tyler Everett, who surrendered three runs – two earned – in two innings but Tye Buckley came on and shut the door, tossing 2 1/3 scoreless before handing it over to Bennett in the ninth.

Tapley finished the day 3-for-4 with four RBI and two runs scored while Tyler Holt had a pair of hits and a pair of runs.

Frankie Ratcliff’s solo shot off the scoreboard in left quickly put the `Canes up 1-0 in the top half of the first.

A single and two steals by lead-off man Tyler Holt set up a sacrifice fly to left by Mike McGee to tie things up at 1-1 after one.

Harold Martinez led off the second with an infield single and he was followed by back-to-back RBI doubles by Pelaez and Melendres to put the `Canes up 3-1.

Tapley brought FSU to within one in the fourth with a solo homer to left after UM left the bases loaded in the top half of the frame.

The `Canes loaded the bases again in the fifth but this time capitalized, scoring four runs to take a 7-2 advantage. Melendres brought home the first two in the frame with a single to right. An FSU error put runners on second and third for Ryan Perry, who followed with another RBI single before Perez drove in UM’ seventh run on a fielder’s choice grounder.

FSU got a run back in the sixth on a double to left by Tapley, cutting UM’s lead to 7-3.

Reliever Eric Whaley loaded the bases with a single and two walks before Gilmartin doubled to left on the first pitch he saw from Taylor Wulf, scoring a pair of runs to bring the Seminoles to within two. After getting the next two guys out, Wulf was lifted for Miranda, who threw a wild pitch to allow FSU’s sixth run to score but induced a grounder to short to get out of the inning with a one-run lead. All three runs in the eighth were credited to Whaley.