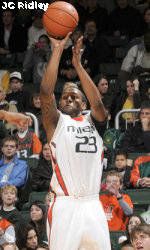 WINSTON-SALEM, N.C. – Immediately following Sunday’s win over Virginia Tech, the Miami men’s basketball team returns to the road for back-to-back games. In the midst of a three-game stretch over seven days, the frequent flier Hurricanes — who will be playing in their fifth ACC road game of the season on Tuesday — head to Winston-Salem for their second meeting of 2009-10 with Wake Forest.

Wake Forest leads the all-time series, 7-3, however Miami has won two straight over the Demon Deacons, including the 67-66 victory in the teams’ first meeting this season on Jan. 9 in Coral Gables. In that win, Dwayne Collins had 11 rebounds and a season-high 23 points to get UM off to its best start in 50 years and into the Top 25 for the first time this season. Malcolm Grant added 14 points and six assists, while Durand Scott contributed 10 points in the winning effort.

But it was James Dews‘ putback with 30 seconds left that put the Miami ahead to stay, 67-66.

All three of the Hurricanes’ wins over the Demon Deacons to date occurred at the BankUnited Center (2010, 2009, 2006). However, UM’s previous three losses at Wake Forest were by an average of 2.7 points per game, including the 70-68 setback in the Hurricanes’ last trip to Winston-Salem on Jan. 29, 2008.

Through 21 games this season, seven different Hurricanes have led the team in scoring, including James Dews who has posted team-high points eight times this season — more than any other current Miami player. Dews, who has scored 20-plus points four times this season and five times in his career — including in Sunday’s win over the Hokies, needs just 28 points to become the 31st Hurricane to score 1,000 career points. He would be the second active Hurricane in the 1,000 points club as Dwayne Collins scored his 1,000th career point on Dec. 2 versus Minnesota, and with 1,151 points he needs just five more to move up to No. 23 among Miami’s all-time leading scorers.

Dews has hit 19 of 21 attempts from the charity stripe in ACC play to rank second in the league at 90.5 percent. Versus Virginia Tech, he went to the line a career-high 10 times, knocking down a career-high nine free throws.

Converting 63.2 percent from the field in Sunday’s win over Virginia Tech — including 70 percent in the first half (14-20), the Hurricanes hit more than 60 percent of their field goals in a game for the first time since shooting 66.7 percent versus Birmingham-Southern on Dec. 3, 2005. It marked the first ACC game this season in which UM hit better than 50 percent in both halves.

Miami has now converted at least 50 percent of its field goals nine times this season, tying the number of times UM accomplished that over the previous two seasons combined (2007-08 and 2008-09). The Hurricanes opened the season with five-straight games hitting at least 50 percent from the field.

COMING SOON TO AN ARENA NEAR YOU

The Hurricanes will be among a limited number of elite men’s basketball teams around the nation unveiling a new series of Nike uniforms this season. Miami will debut its new unis in Coral Gables on Feb. 10 versus Georgia Tech. Stay tuned for more…

Redshirt freshman Reggie Johnson returns home to Winston-Salem for the first time as a Hurricane… Miami is 12-1 when scoring at least 70 points this season, including an 8-0 mark when scoring at least 80 points… Adrian Thomas has hit a three-pointer in 15-straight games — the longest active streak in the ACC… Miami leads the ACC with 170 made 3s this season (8.1/game), while Wake is 12th in the league with 85 (4.5/game)… UM’s 29 bench points in Saturday’s win over Virginia Tech marks the second-highest contribution by bench players in ACC play this season, behind the Hurricanes’ 34 from non-starters at Boston College on Dec. 6… Former UM men’s basketball player Jimmy Graham (2006-09) played in Saturday’s Senior Bowl and has been invited to participate in the NFL Combine after playing one season with the Hurricanes football squad as a tight end… Nine of 13 Hurricanes are freshmen or sophomores.