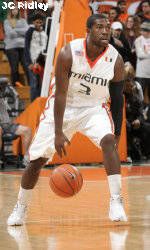 No. 23 Miami Hits the Road for Virginia Tech

BLACKSBURG, VA. – The No. 23 University of Miami men’s basketball team is off to its best start in 50 years, and takes its seven-game win streak on the road for its next two ACC games, beginning with Virginia Tech on Wed., Jan. 13.

The Hurricanes play three of their first four conference games on the road — and five of their next seven — before retuning home for a re-match versus Boston College on Tues., Jan. 19.

UM is 6-1 outside of Coral Gables this season, with a perfect 4-0 mark on neutral courts and a 2-1 record on opponents’ home courts. Miami’s lone loss in 16 games this season is a one-point defeat in its ACC opener at Boston College on Dec. 6.

With Saturday’s win over Wake Forest, the Hurricanes earned their 15th win in the fewest games (16) since 1959-60.

UM earned eight votes in the Coaches Poll this week.

The all-time series between the Hurricanes and Hokies is tied, 8-8, however Miami was victorious in its last game in Blacksburg, 74-71, on Feb. 9, 2008. Virginia Tech head coach Seth Greenberg served as an assistant at Miami from 1985-87, during the return of Miami basketball following a 14-year hiatus.

Durand Scott was selected ACC Rookie of the Week for the third time this season after finishing with 10 points, three assists, two rebounds and a steal in helping Miami knock off Wake Forest on Saturday. Scott, the first Hurricane to be honored three times in a season by the ACC, leads all conference freshmen and ranks seventh overall in assists per game (4.4) and is third in assists-to-turnover ratio (2.15:1) behind a pair of seniors.

Adrian Thomas has now converted a three-pointer in 31 of his last 34 games — including 10 straight for the longest active streak in the ACC. With three treys versus Wake Forest – for 11 three-pointers at a 68.8 percent clip over the last three games – he now has 14 games with three-or-more three-pointers over his career, including eight this season.

Dwayne Collins posted the 19th double-double of his career and fifth of the season with a season- and game-high 23 points and 11 rebounds to push Miami past Wake Forest. He is sixth all-time at UM, trailing Constantin Popa (1991-95) by just one double-double, and is tied for the fourth among active ACC players in career double-doubles.