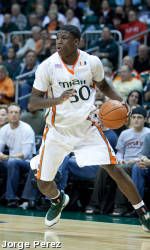 “It felt great,” said Scott after the game. “I was happy to be there and just wanted to go out there and have fun with my teammates. I wanted to get a feel for the guys – just to know how they play and how I can play with them, when to pass, who the shooters are, who runs well on the floor – so I know how to put myself in the right position to make them better.”

Scott converted 6-of-8 field goals and all four of his free throw attempts in his first action for the Hurricanes. Senior Cyrus McGowan added 14 points on 5-of-7 shooting – including a 2-of-3 mark from long range – and five rebounds, while senior Adrian Thomas contributed 12 points on 4-of-7 three-point shooting and five boards.

The Hurricanes broke the game open with a 19-4 run over a six minute, 32 second span in the first half. Four points from sophomore Julian Gamble and three-pointers from Thomas and freshman Antoine Allen helped fuel the run in which eight different Hurricanes scored.

Miami led by as many as 36 points in the game. A McGowan trey followed by back-to-back dunks by the lanky senior sparked a 16-3 run, pushing the Hurricanes lead to 56-32 with 14:25 remaining in the contest. The home team didn’t let up, as four-straight Allen points and a Thomas trey pushed Miami’s lead to 30 points, up 69-39 with 8:35 to go.

“Obviously I thought we played much better in the second half,” said sixth-year head coach Frank Haith. “Defense was good most of the night. Florida Southern is a really good basketball team – one of the top Division II programs in the country. You look across the country and you see some Division II teams beating Division I teams. Our young kids – first time out the box – looked a little nervous there early on, but it was great to see us get ourselves in rhythm.”

In his debut in a Hurricane uniform, redshirt sophomore Malcolm Grant knocked down a three-pointer on Miami’s first possession. A block – the first of a game-high five – by senior Dwayne Collins, followed by a McGowanlayup and a Gamble dunk put the Hurricanes up, 7-4.

All but one Miami player scored in the exhibition contest.

The Hurricanes – who went 19-13 last season, advancing to the second round of the NIT – opened their last two seasons versus the Division II Moccasins and used Monday’s game as a final tune up before their 2009-10 season-opener at home on Saturday versus North Carolina Central at 4 p.m. The game will be broadcast live on Sun Sports.

Florida Southern, ranked eighth in the NABC Division II preseason poll, went 29-7 last season en route to its second-straight Sunshine State Conference championship. The Moccasins dropped their previous exhibition game to USF, 110-79, despite having four scorers in double figures. Miami held all but one Moc to single digits, as junior Brandon Jenkins led the visitors with 14 points and five rebounds.