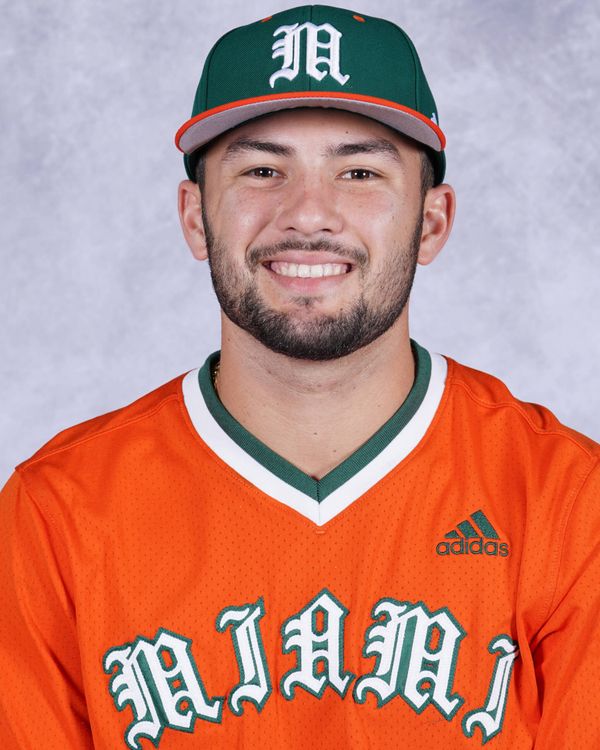 Freshman (2022): Played in 44 games and made 43 starts at second base in his debut season with Hurricanes…Missed one month due to a lower-body injury…Hit .263 with 32 runs scored, seven doubles, two homers and 21 RBI…Finished with 10 multi-hit performances and five multi-RBI games…Totaled a .345 average across his first 15 contests…One of two freshmen to earn a start on Opening Day against Towson (Feb. 18)…Recorded his first collegiate hit, a solo home run, as part of a 2-for-4 and season-best three-RBI effort vs. Towson (Feb. 19)…Became the first Hurricane since CJ Kayfus in 2021 to homer for his first collegiate hit…Capped off his first weekend with two hits and drove in two runs in the series finale against Towson (Feb. 20)…Registered his first career three-hit performance vs. Harvard (Feb. 25)…Started a season-long eight-game hitting streak and 15-game on-base streak, reaching safely four times against Harvard (Feb. 27)…Notched back-to-back multi-hit efforts against FIU (March 8) and Boston College (Mar. 11), tallying five hits over the two tilts…Picked up a pair of knocks in his first ACC road affair at No. 18 Clemson (Mar. 18)…Mounted a two-hit game, including his second career home run vs. 13th-ranked North Carolina (Mar. 25)…Returned after missing one month, coming off the bench against North Dakota State (May 6)…Reached base a co-season-high four times, including his third three-hit effort, vs. UCF (May 11)…Posted two knocks and plated two runs at No. 21 Florida State (May 14)…Recorded a pair of hits and an RBI in the Coral Gables Regional opener vs. Canisius (June 4).

High School: Four-year letterman at Belen Jesuit Prep, serving as captain in 2020-21…Earned all-district recognition each year…Batted over .300 in all four seasons, including a career-best .364 average as a senior…Paced his district with five home runs in 2021…Selected as team MVP following his senior season…Helped lead Belen Jesuit to a regional championship…Also played football at Belen.

Personal: Parents are Dorian and Nora Gonzalez…Father, Dorian, played baseball at Miami from 1994-96, reaching the College World Series in all three seasons…Intends to major in business.