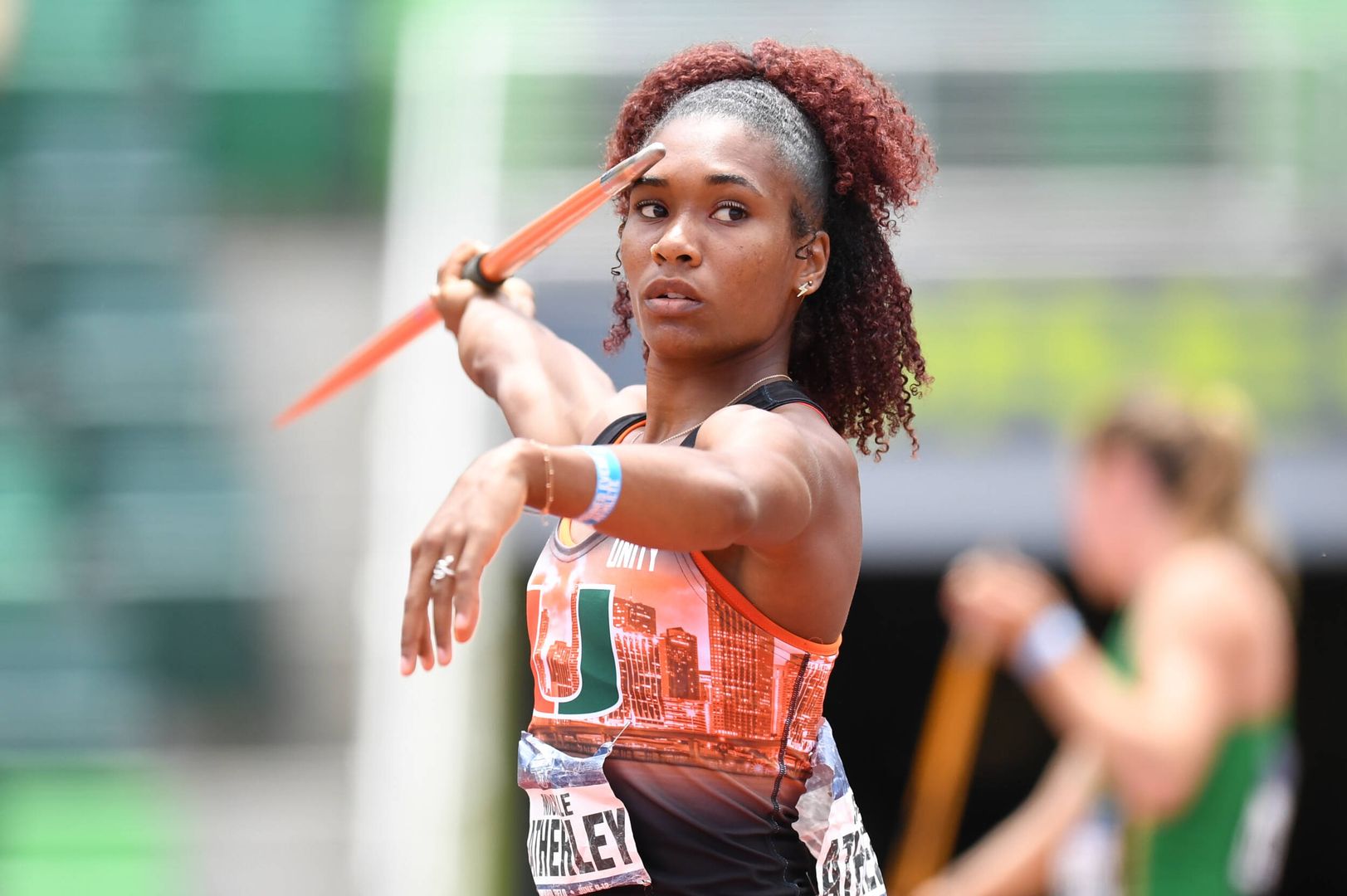 It was another year full of memorable moments for Miami Athletics. As we approach the end of 2021 we’ve compiled a list of our favorites (in no particular order).

Canes Upset Pitt on the Road

Michelle Atherley took second place in the heptathlon at the NCAA Outdoor Track & Field Championships in Eugene, Ore. Atherley, who won the 2019 NCAA pentathlon title, finished with 6,067 points, including a personal best in the javelin.

Estela Perez-Somarriba, looking to defend her 2019 NCAA singles title, found herself down a set and 5-0 in the quarterfinals against UCLA’s Abbey Forbes. She then staged a comeback for the ages, rallying for 6-7, 7-5, 6-3 win in a match that took over three hours. Perez-Somarriba nearly made it two titles in a row before falling in the final to Virginia’s Emma Navarro. She finished her illustrious career with a 165-26 mark, shattering the Miami record for victories by 31 and finishing second all-time in the ACC.

After a regular season in which the roster was decimated with injuries, the Canes weren’t expected to make much noise in the ACC Tournament. But Miami upset Pittsburgh and Clemson and took eventual tournament champion Georgia Tech to the wire in the quarterfinals, ending the season on a positive note.

The Canes opened their 2021-22 season with a 72-67 win over Jackson State and in the process Katie Meier earned her 304th career win at Miami, become the school’s all-time winningest basketball coach. Meier passed fellow UM Sports Hall of Famer Ferne Labati, who was attendance to watch the record fall. 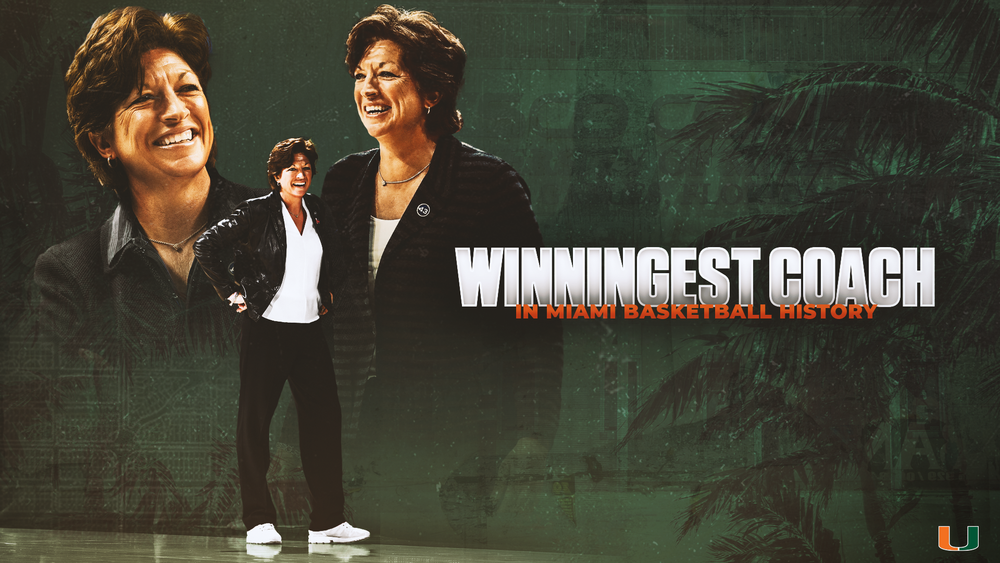 Volleyball Rallies to Win in Tallahassee

The Canes rallied to win an emotional five-setter over Florida State, earning their first season sweep of the Seminoles since 2008. It was also Miami’s first win in Tallahassee in 11 years. Savannah Vach paced the Canes with a season-high 58 assists and career-high 21 digs.

Miami’s volleyball team opened the 2021 NCAA Tournament with a 3-1 win over South Alabama in Gainesville, Fla., which was the Canes’ first NCAA win in four years. Janice Leao paced UM with 12 kills and seven blocks.

No. 11 Miami defeated top-ranked Florida 8-6 in Gainesville to secure a series win to open the season. The Canes jumped out to an 8-0 lead before holding on for their first series win over the Gators since 2014 and the first in Gainesville since 2009.

Riding outstanding pitching, the Canes earned a three-game sweep at No. 19 Louisville to end the regular season, becoming only the second team to sweep the Cards at Jim Patterson Stadium and the first team to do so in 16 years.

Taylor Shell scored with less than 30 seconds remaining in overtime, lifting the Canes to a 1-0 win at Florida. It was Miami’s first win over the Gators since 2012.

On the first day of the SMU Classic the Canes made history in the 400-yard medley relay as Danika Huizinga, Emma Sundstrand, Giulia Carvalho and Carmen San Nicolas hit the wall in a school record-setting time of 3:37.95.

Franco Aubone and Benjamin Hannestad dropped their opening match at the ITA National Fall Championships in San Diego but then rattled off four straight wins to capture the consolation title. The run moved the doubles pair up to seventh in the national rankings.

No. 24 Miami roared past No. 6 Florida State 4-1 to advance to the ACC Tournament semifinals in Rome, Ga. The Canes took the doubles point and then won the top three singles matches to earn a 12th ACC semifinal appearance in 16 seasons.

Miami’s rowing team earned the bronze medal in the Women’s Club Four race at the prestigious Head of the Charles in Boston. The varsity four boat is comprised of coxswain Shelly Sclater, Stephanie Ferrali, Constance Stirling, Aaliah Dawson and Marilou Chardin turned in the best Head of the Charles performance in school history.

Debbie Ajagbe earned ACC Indoor Field Performer of the Year honors for the second straight year after defending her ACC shot put title at the conference meet in Clemson, S.C.

Two Canes Drafted in the First Round 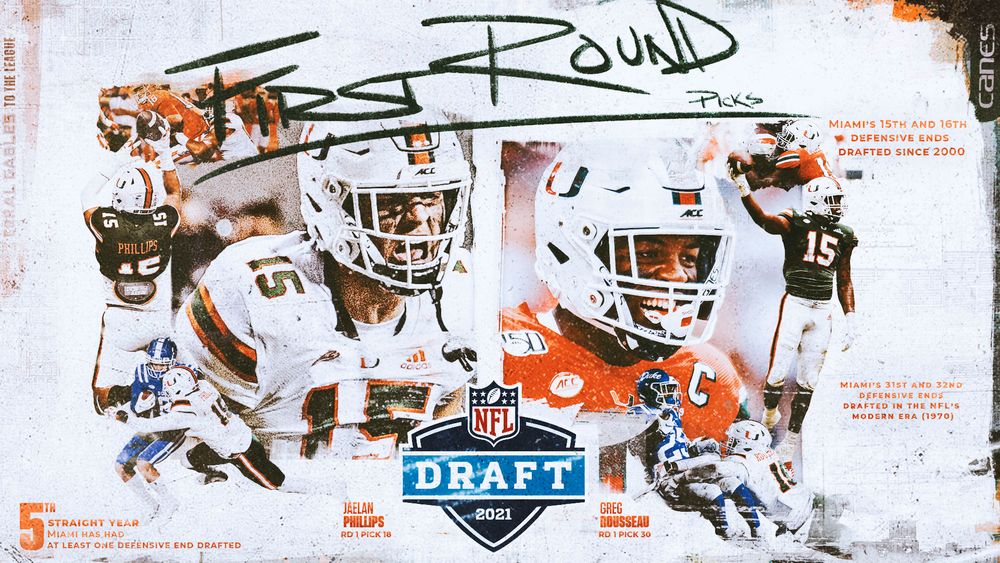 UM student-athletes continued their strong work in the classroom this past year, posting a Graduation Success Rate (GSR) of 91 percent for the second consecutive year, as announced by the NCAA. This marks the sixth consecutive year and ninth year in the past 10 that Miami earned a four-year average rate of 90 percent or higher. The Hurricanes’ GSR was higher than the national average of 88 percent.