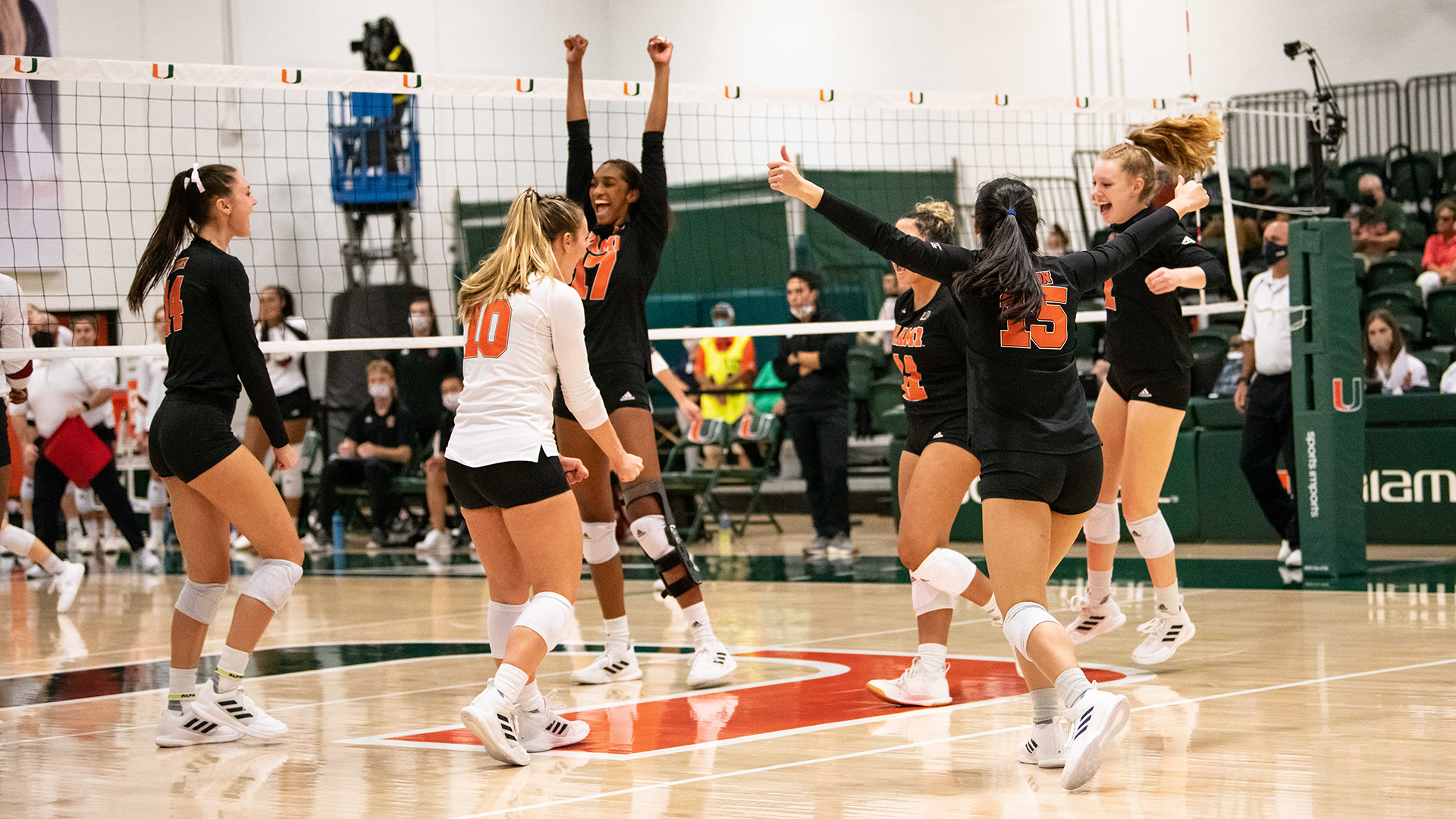 TALLAHASSEE, Fla. – The University of Miami volleyball team won a five-set barn burner for the season sweep of Florida State on Friday night on Lucy McDaniel Court inside Tully Gymnasium.

This win marks the first Hurricanes’ (22-4, 13-3 ACC) win in Tallahassee under head coach Jose “Keno” Gandara” and first for the program on the road against the Seminoles since Nov. 26, 2010, also in five sets.

“If my memory is correct, this is the first time I’ve won here in my tenure,” said head coach Jose “Keno” Gandara. “I figured it would end like this. I don’t know if this match did a great job deciding who the better team is, but all matches have winners, so we’ll take that title for now. FSU is really, really good. I can’t say enough good things about them, and the job Chris [Poole] does every year. They’ll do well in the tournament and beyond.”

Florida State took the first set, 25-19, followed by an identical score in the second set but in favor of the Hurricanes. FSU regained the match lead in the third frame, 25-20, while the match was evened in the fourth set with the 25-22 win by Miami. The Canes secured the victory in the fifth set, 15-12.

“I wish I could take credit for our team’s resilience, but I was sweating at 12-8 in the fifth set,” Gandara added. “But if you’ve followed our season, this has happened a few times: when panic should be setting in, we raise our level of play. It’s a concept we talk about a lot: antifragility. This may be my favorite example of that idea in my coaching career so far. I love coaching this group and so proud to be a part of it.”

Five Hurricanes – Angela Grieve, Peyman Yardimci, Janice Leao, Aristea Tontai and Janet Kalaniuvalu – all recorded double-digit kills in the win. Grieve led the match with 23 kills. Yardimci added in 16 with 11 digs for her third career double-double. The trio of Leao, Tontai and Kalaniuvalu each totaled 10 kills on the night.

Savannah Vach notched her fourth game this year with 50 or more assists after posting a season- and match-high mark of 58, along with a career-best 21 digs for her ninth double-double of the season.

Priscilla Hernandez led the contest with 25 digs and finished with five assists. Emily Damon was the fourth Cane to register double-digit digs in the victory with 12.

After a tightly contested first half of the opening set, where the lead for either team was no more than one point, as the Seminoles took a 15-13 lead to the media timeout. Out of the break, Florida State extended its lead to five to force Miami to use its first timeout. Despite a resilient effort from the Canes to fight back, FSU held on to win the set, 25-19.

The Hurricanes flipped the script in the second frame behind a strong attacking percentage of .366. It was Miami this time who took the 15-13 lead at the media timeout before Florida State was forced to use both of its timeouts down by four, 21-17. The Seminoles rallied back to within three, 22-19, but it was the Hurricanes who closed the set on a 3-0 run as a kill by Tontai capped off the win, 25-19.

Florida State took control early in the third set, extending their lead to as much as five, 13-8. The teams went to the media break with Miami behind, 15-11. A 7-3 run from the Seminoles extended their lead to eight. The Canes battled back to within four, 23-19, with a 5-1 run. Ultimately, it was FSU who walked away with the victory, 25-20.

In a nail-biting fourth set, back-to-back 3-0 runs from each team led to both Miami and Florida State using an early timeout. The teams drew even at 11 all before three straight points from FSU pushed them in front, 14-11, to make the Canes use their second timeout. Miami pushed back to even the set, 18-18, off back-to-back kills from Grieve. FSU regained the advantage, 20-18, but the Hurricanes responded with a 7-2 run for the 25-22 win and force a deciding fifth frame.

Miami took the slim 8-7 lead to the media timeout in the fifth set. Out of the break, Florida State utilized a 5-0 run to make the Canes use a timeout. From there it was all Miami as it closed the match on a 7-0 run to take the match deciding set, 15-12.

Next up, the Hurricanes will travel to Chapel Hill, N.C., to face North Carolina at 1 p.m. on Sunday for their regular season road finale.