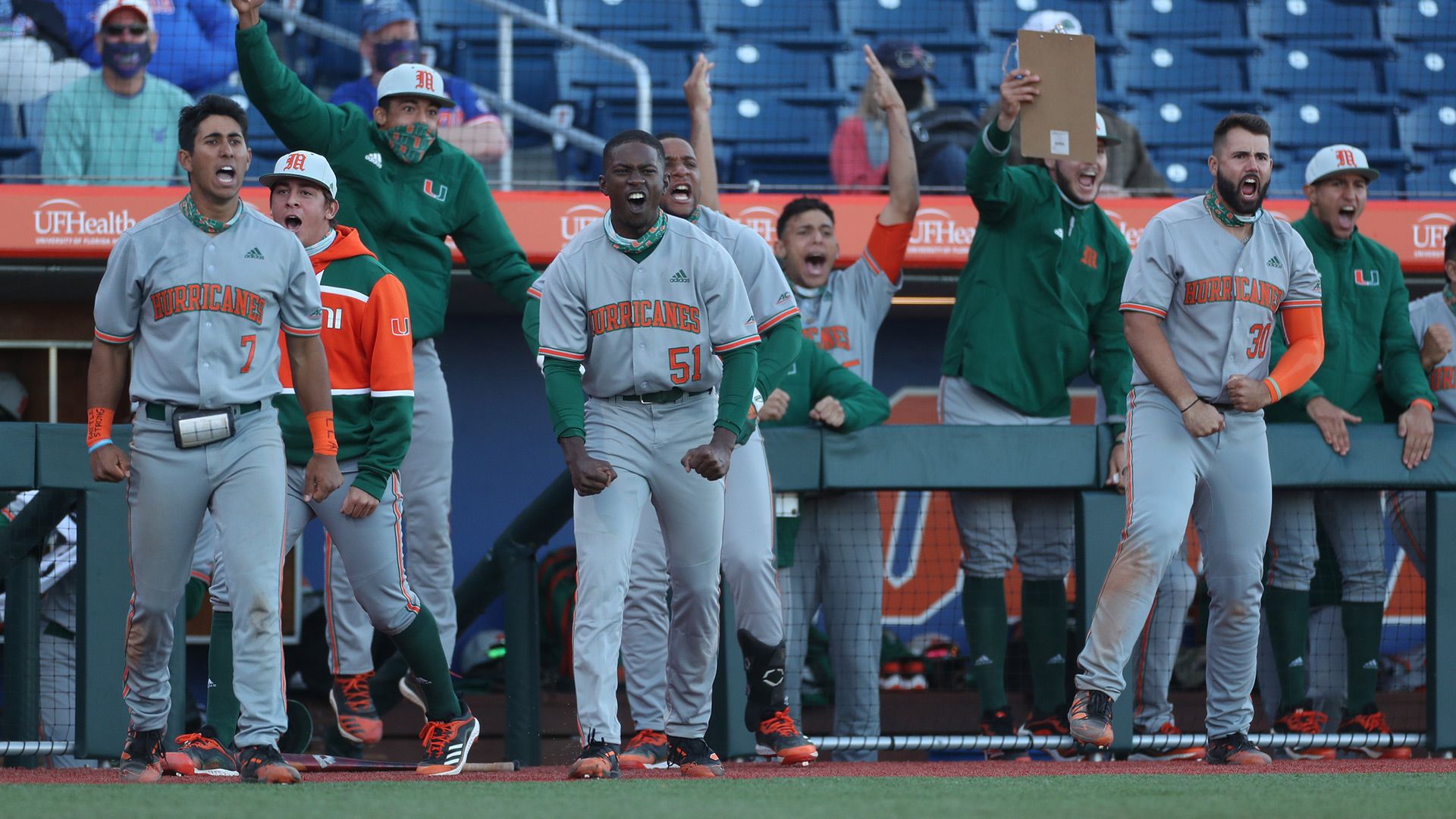 GAINESVILLE, Fla. – Winning a rivalry series is always special and the Miami Hurricanes did just that Sunday afternoon, taking the series finale over the top-ranked Florida Gators with an 8-6 victory inside Florida Ballpark.

The No. 11 Hurricanes (2-1) came into Gainesville for their annual three-game tilt against rival Florida (1-2). Miami nearly came back to win Friday’s opener before a resilient comeback win on Saturday. Sunday’s victory closed out the Hurricanes’ first series win over Florida since taking two-of-three in 2014 and was Miami’s first series victory in Gainesville since sweeping the Gators in 2009.

“It was a big, big series to start the year off and we know it was going to be a big test,” head coach Gino DiMare said. “The big thing I took away, especially the first few nights, is just the fact that our players never gave up. Even in the first game, we lost but we kept battling, and I think it carried over to the second game. We scored three runs in the last inning to tie it and that gave us the chance to go to extra innings and win it and taking that game gave us the chance to win the series today. It was nice to come out and get a big lead, but you just know it’s never going to be over. That’s obviously a very good program, they’re going to keep fighting and we were able to finish it there at the end. It was a total team effort from a lot of people, a lot of guys got their feet wet in this series for the first time, a lot of better veteran guys played well and I’m just so, so happy for our players and our program.”

Like most games between the two baseball powers, Sunday’s was a battle until the very end. But momentum shifted heavily in the Hurricanes’ favor from the very beginning.

After going down 0-2, leadoff batter Jordan Lala was hit in the back by a 1-2 breaking ball from Florida starter Hunter Barco. After Lala stole second, Yohandy Morales singled up the middle to put runners at the corners with one out and Miami standout Adrian Del Castillo at the plate. The third-year hitting machine ripped a two-run double and Alex Toral followed with an RBI single to right that sent Del Castillo home from second to cap a three-run first inning by the Hurricanes.

Stepping on the mound for the first time as a Hurricane, Victor Mederos showed why he is one of the top true freshmen pitchers in the country. The right-hander settled in after giving up a leadoff double to Jacob Young, striking out the side in first collegiate inning.

Miami’s offense got going again in the second, with Tony Jenkins leading off the frame with a walk and stolen base before scoring from third on a two-out line drive off the bat of Anthony Vilar that Florida shortstop Josh Rivera could not handle and resulted in a 4-0 Canes’ lead. The error extended the inning and the Hurricanes took advantage, running up Barco’s pitch count by sending three more batters to the plate in the inning.

The Hurricanes led off the third inning with their first homer of the season, as Raymond Gil crushed a 2-2- offering from Barco well beyond the 380-foot sign in left-center field. Gil, who delivered the game-winning hit in the 13th inning on Saturday, gave Miami a five-run lead after just three innings.

And Miami’s offense kept firing against Barco in the fourth, with Morales lacing a triple into the right field corner that drove in Lala to make it 6-0. Del Castillo followed with a hit-by-pitch, and Barco was lifted with runners at the corners and one out in the fourth. The Canes made Barco’s first start of the season a forgettable one for the second-year lefty, as he allowed eight runs (seven earned) on seven hits over just 3.1 innings pitched.

Right-hander Hunter Mink replaced Barco on the mound and the Hurricanes had success against the Gators reliever, loading the bases before Christian Del Castillo smacked a two-out, bases-loaded two-run single that made it 8-0 in Gainesville.

“It’s huge to win this series,” Del Castillo said. “It means a lot to me, especially that I’m playing with my brother. It’s a once-in-a-lifetime kind of thing. I’m just glad to be a part of it and to fight with my brothers along my side. I’m very happy to be here.”

Florida’s offense had some success against Mederos in the bottom of the fourth, opening the inning with three straight singles. Jordan Butler’s base hit up the middle drove in Nathan Hickey to make it 8-1.

After scoring in each of the first four innings, Miami was held scoreless for the first time all game in the top of the fifth. Florida answered with a run in the bottom of the inning on an RBI single by Butler. Mederos was lifted with two outs and the bases loaded in favor of Anthony Arguelles, who got Rivera to fly out to right and end the threat.

“We had a meeting the night before the opening game and I said, ‘look, we’re not putting on any rings this weekend. Nobody’s going to crown us champions after one series, but our expectation is to come in here and win the series,’” DiMare said. “I thought we just did an excellent job — everybody, coaches, players, everyone — of just staying very relaxed and focused on just playing a full game. Whatever happens, we’re going to lay it all out on the line and everybody’s going to play their tails off.”

Mederos’ collegiate debut was a good one, as the true freshman held Florida to two runs (one earned) on seven hits while striking out five Gators over 4.2 innings pitched.

“For his first outing, I thought he threw really well in that environment and playing against that team,” DiMare said. “I think both him and Alejandro Rosario, our two freshmen, really did a solid job. They’re only going to get better coming out of a performance and experience like this weekend here against the number one team in the country. Those two guys, I think they did a very, very good job for their first outing as freshmen, first college start as freshmen.”

The Gators added a pair of runs in the sixth, with Jacob Young singling home Mac Guscette and Colby Halter scoring on a balk by Arguelles. An inning later, Sterlin Thompson doubled off JP Gates to push home Rivera and Colby Halter singled off Jake Smith to drive in Thompson and put the Gators within two.

After Jud Fabian worked a walk to put the tying run on, DiMare called for lefty Spencer Bozanda to face the left-handed-hitter Hickey and the move was effective, as Hickey flew out to right and stranded two more Gators.

Miami stranded a baserunner in the top of the eighth and Florida appeared poised to score with runners at the corners and one out against Miami reliever Ben Wanger. But freshman first baseman CJ Kayfus snared a Thompson line drive and tagged Rivera to complete the inning-ending double play and preserve Miami’s two-run lead.

“We were still battling. We did put some guys on the bases but we just couldn’t get any big hits or anything like that,” DiMare said. “At the end of the day, scoring those eight runs was huge because that was the difference in the game.”

“I just always want to be there for my team and be the guy that gets to pitch in the toughest situations,” Palmquist said. “When you get the feeling of pitching in a huge game, you don’t worry how your arm or legs feel. It means an unbelievable amount to me to get my first save and help our team win this series. I know everyone who is a Miami fan or ex-player is going crazy about us beating the Gators and I am glad I could be a part of it.”

Miami heads back to Coral Gables for its first home series of the 2021 season. The Hurricanes will open conference play with a three-game set against Virginia Tech beginning Friday, Feb. 26 at 7 p.m.

“It’s been a long time since we’ve won a series against these guys,” DiMare said. “It’s not easy, they’re good program. A lot of people have gone down to the Gators over the years. I feel good about where our program is at and I’m very happy for winning the series but we have to keep it in perspective. We’ve got to turn the page because we’ve got 47 more of these to go.”