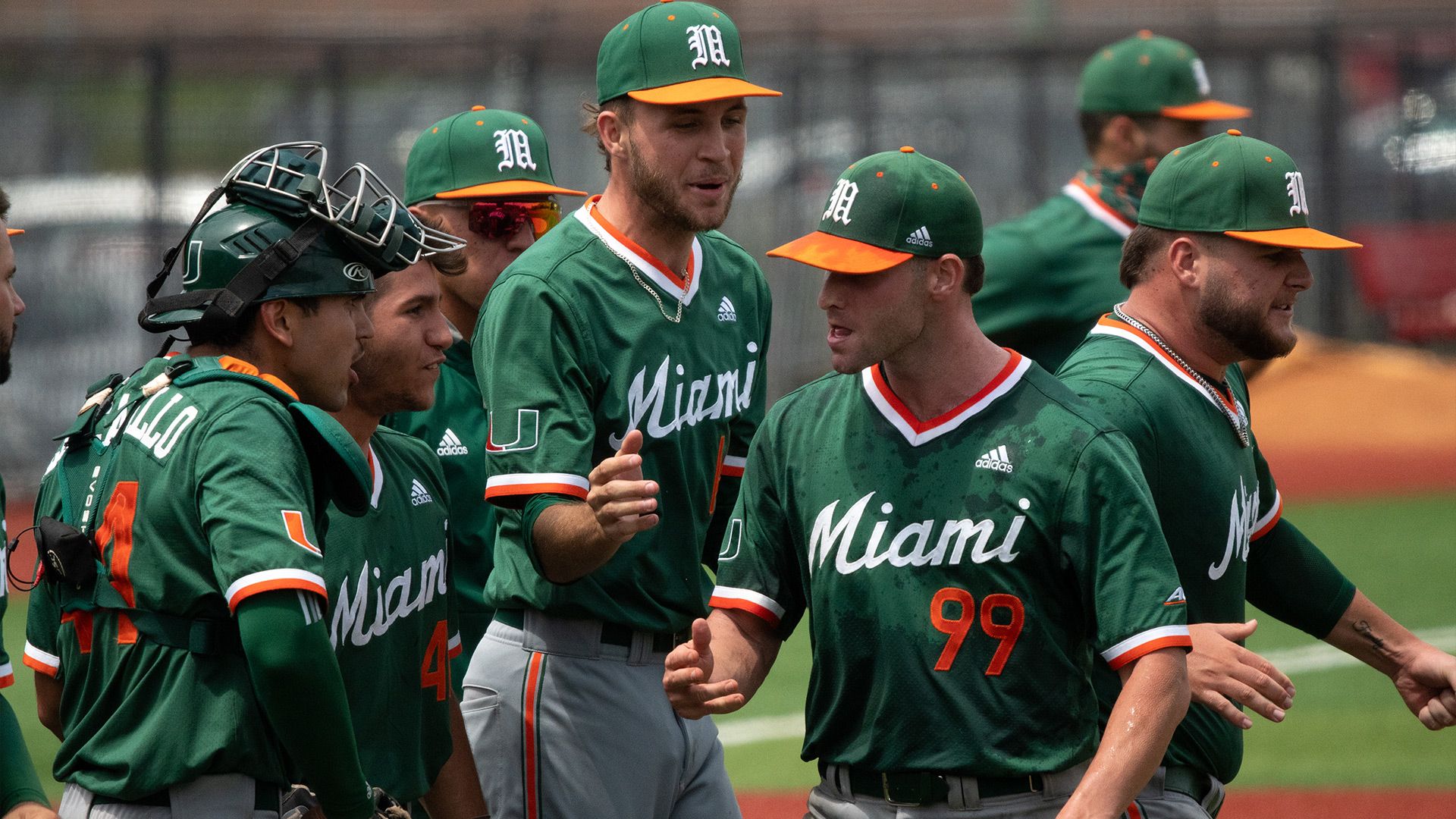 LOUISVILLE, Ky. – The Miami Hurricanes made history on Saturday afternoon, becoming only the second team to ever sweep Louisville at Jim Patterson Stadium.

“It’s been an up-and-down year here,” head coach Gino DiMare said. “The word we’ve used is ‘inconsistent’ and a bit of a roller coaster. At the end of the day in baseball, it’s the teams that get hot at the end that are going to have success.

“We’re winning games, but I still would like us to play more team baseball,” DiMare added. “We’ve got to swing the bat better. The pitching was outstanding, but we gave them some chances there by not scoring runs in the second half of the game. At the end of the day when you’re winning games and you’re not putting it all together, that’s really good sign. I’m just waiting for us to put it all together. It was a huge, huge weekend for us as we get ready for the ACC tournament.”

Louisville (27-21, 16-16 ACC) got on the board first, as Alex Binelas ripped an RBI double down the right field line to give the Cardinals a 1-0 lead in the bottom of the third. That was all they’d muster against Miami starter Jake Garland, as the right-hander scattered three hits while striking out two batters and inducing nine groundball outs over five innings to earn his team-leading sixth win of the season.

“We’ve been riding the roller coaster a little bit this year and we’ve had our ups-and-downs, but we never quit,” Garland said. “Going into the playoffs, if you can get hot at the right moment and continue that into the ACC tournament with another win, it would be huge for us.”

The Cardinals’ lead was short-lived, as Miami responded with a rally in the top of the fourth against Louisville starter Tate Kuehner. Anthony Vilar opened the inning with a hit by pitch and Yohandy Morales followed with a single and advanced to second as a throw was late trying to get Vilar at third.

Adrian Del Castillo tied the game with a base hit up the middle that pushed Vilar home, but a two-out, bases-loaded single from Jordan Lala drove in a pair and vaulted Miami ahead, 3-1.

“It was the difference in the game and the big one was the two-out, clutch two-RBI clutch hit by Lala,” DiMare said. “That was huge and it ended up being the difference in the game. That was the game-winning hit in the fourth inning. I thought this game was going to be a little bit more high-scoring on both sides being a Sunday game and us not having two of our better guys in the back end of the bullpen. It ended up being a low-scoring game. I’m proud of our pitchers, they threw very well, and I’m proud of our team. Still didn’t swing the bat the way I’d like, but we found a way to win the game.”

Louisville got a run back in the bottom of the sixth with some help from a replay review. With runners on first and second and one out, Cooper Bowman blooped a ball to shallow right that umpires ruled was caught by Vilar. Review overturned the play and loaded the bases for Trey Leonard, who reached on a fielder’s choice that sent home Binelas to make it 3-2. But reliever Andrew Walters got out of the jam and limited the Cardinals to just one run in the inning.

“We didn’t have Palmquist or Bonanza available and they’re two of our better guys in the back end. Those guys that came in were huge for us,” DiMare said.

Henry Davis led off the bottom of the eighth with a base hit and, with one out, pinch runner Chris Seng stole second and advanced to third on a throwing error by Adrian Del Castillo. But right-hander Daniel Federman got out of the jam to keep Seng stranded on third and send the game to the ninth.

The fourth-year right-hander tossed a scoreless ninth, completing the day with 2.2 shutout innings to wrap up his first save of the season.

“It means the world to me,” Federman said. “It’s been four unreal years here. I’ve pitched in basically every situation up to this point and just to be able to go out there and give the team the chance to win, it means the world to me. Especially with it being the last game of the season, closing out a sweep against a top team like that took everybody. It literally takes everybody to win all three games, and I’m just glad I was able to come through for the guys.”

With the victory, Miami clinched a top-four seed in the 2021 ACC Baseball Championship. The Hurricanes will travel to Charlotte, N.C., to compete in the annual conference tournament from May 25-30 at Truist Field.