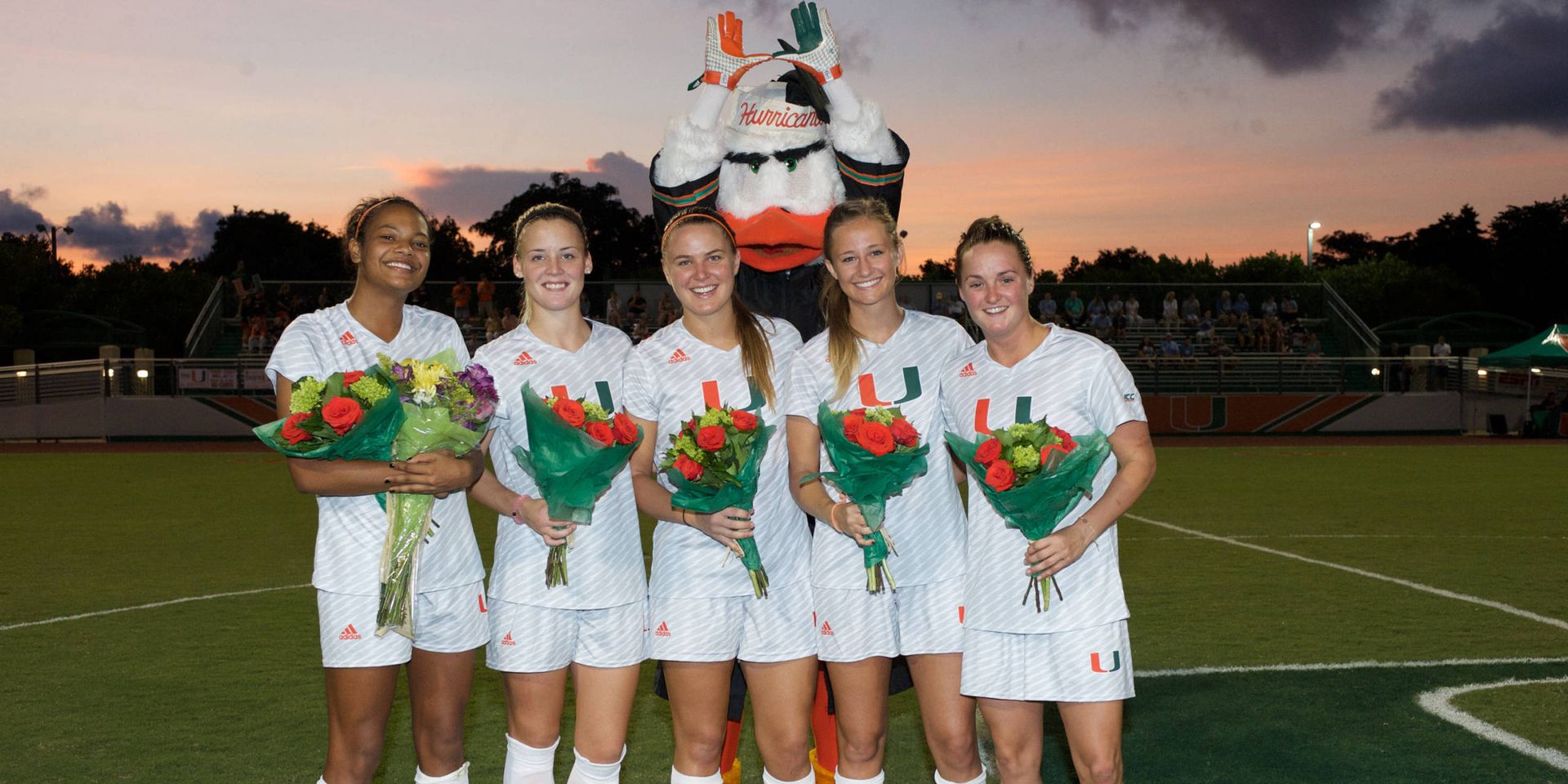 CORAL GABLES, Fla. – The University of Miami soccer team dropped the final match of its 2015 season 2-0 to No. 8/5 North Carolina Saturday night.

Miami (5-12-0, 2-8-0 ACC) fell behind in the third minute and was unable to come back against the 21-time NCAA champions on senior night at Cobb Stadium.

“There was a lot of emotion out here today. Anybody knows it on senior day; you have a lot going through your head,” Miami head coach Mary-Frances Monroe said. “You want to play well, you want to compete. And to have one of the top teams in the country come in for senior day, it definitely puts some pressure on you, but the team was ready and prepared and excited to get on the field.”

Senior forward Summer Green got North Carolina (14-3-1, 7-3-0 ACC) on the board early, scoring on the first shot either way. She received a cross from sophomore midfielder Megan Buckingham in the six-yard box and beat Miami redshirt sophomore goalkeeper Catalina Perez.

The Hurricane defense held strong the rest of the half to stay within a goal at the break. Perez logged four saves in the opening session, including one with her leg from close range.

North Carolina tallied the second and final goal in the 55th minute on a similar play to the first one. Sophomore forward Jessie Scarpa sent a superb cross to a sprinting Alexa Newfield and the redshirt senior forward put it in the back of the net.

The Hurricanes played without injured junior forward Gracie Lachowecki, who entered the night third in the ACC in goals and points. Miami had a few chances in the final minutes, but the Tar Heels held strong to earn the victory and clinch a berth in the four-team ACC Championship.

The match served as the final one in the careers of seniors Ava Ambrose, Erin McGovern, Natalie Moik, Jasmine Paterson and Amy Schmidt.

The Hurricanes conclude the 2015 season with better numbers in nearly every statistical category from last year and have 18 players with eligibility remaining. Anson Dorrance, the head coach of North Carolina for all 21 of its NCAA titles, shared his thoughts on the team with Monroe after the match.

“A lot of people have watched a lot of our games, especially being on ESPN3. We have played great soccer,” Monroe said. “Anson just said they’ve been watching games and we were a tough team and they were prepared to [have to] defend us. And he has a lot of respect that we go out every game and try to play and not hurt anybody and to try to play the game that we love. So, I’m just really proud of them.”

To keep up with the University of Miami soccer team throughout the offseason, follow @CanesFutbol.