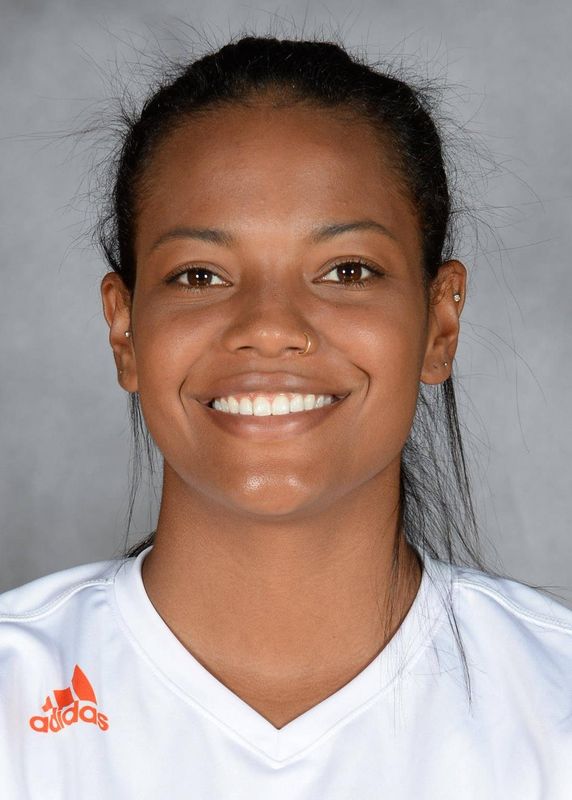 2015 (Senior): Played in 16 matches and made four starts … Tallied one goal, one assist and three points … Registered 17 shot attempts, including six on goal … Saw 831 minutes of playing time … Played 30-plus minutes in 13 of her appearances … Went the distance in all four of her starts, each of which came in the final four matches, after making the switch from forward to defense late in the season … Logged her first shot on goal of the year in Miami’s first match of the season against Texas (8/23) … Filled the stat sheet with three shot attempts, two shots on goal, one goal and one assist in just 39 minutes of action in the victory over North Florida (9/13) … Posted a season-high four shot attempts, including one on goal, in the win over NC State (10/11) … Made her first start of the season at No. 12/7 Virginia Tech (10/17).

2014 (Junior): Saw action in 17 of 18 matches, including nine starts … Finished tied for second with two goals … Had 20 shots, including 12 shots on goal … Recorded first goal of season in win over Stetson (9/5) … Scored team’s lone goal against Washington (9/14) at Nike Portland Invitational … Eight of nine starts came during conference play … Had season-high four shots twice: against Portland (9/12) and in season finale against Wake Forest (11/2).

2013 (Sophomore): Served as one of team’s most reliable forwards, seeing action in all 18 games with 17 starts … Ranked second on team in goals (four), assists (three) and points (11) … Registered team-high 40 shots, including 23 on target … Ranked second in game-winning goals with two … Tallied points in three straight games to open season … Scored first goal of 2013 season in 2-1 win over Cincinnati (8/23) … Converted impressive volley for second goal of season against Jacksonville (8/25) … Credited with assist in 2-1 win over Milwaukee (9/1) … Scored one goal and assisted on another in 2-1 win over NC State (9/19) … Delivered another three-point performance against Boston College (10/20) with one goal and one assist … Played 90-plus minutes in two games, totaling 1,294 minutes on season.

High School: Ranked among the top 25 players nationally in the Class of 2012 by Top Drawer Soccer  … Also ranked the second-best player in Florida and sixth-best forward in the nation according to Top Drawer Soccer … Named the Key West Citizen‘s Monroe County Player of the Year four straight years at Coral Shores … Also earned All-Monroe County recognition four years in a row from the Key West Citizen … Guided the team to a second-place finish in districts two seasons (2009-11) and third-place finish in her final year (2012) … Was a Gatorade Player of the Year nominee in both 2011 and 2012.

Personal: Parents names are Rachel and Arthur … Has one younger brother, AJ, and one young sister, Hallie … Chose Miami over Duke, Maryland, UCLA, Virginia and Stanford … Undecided on her major.