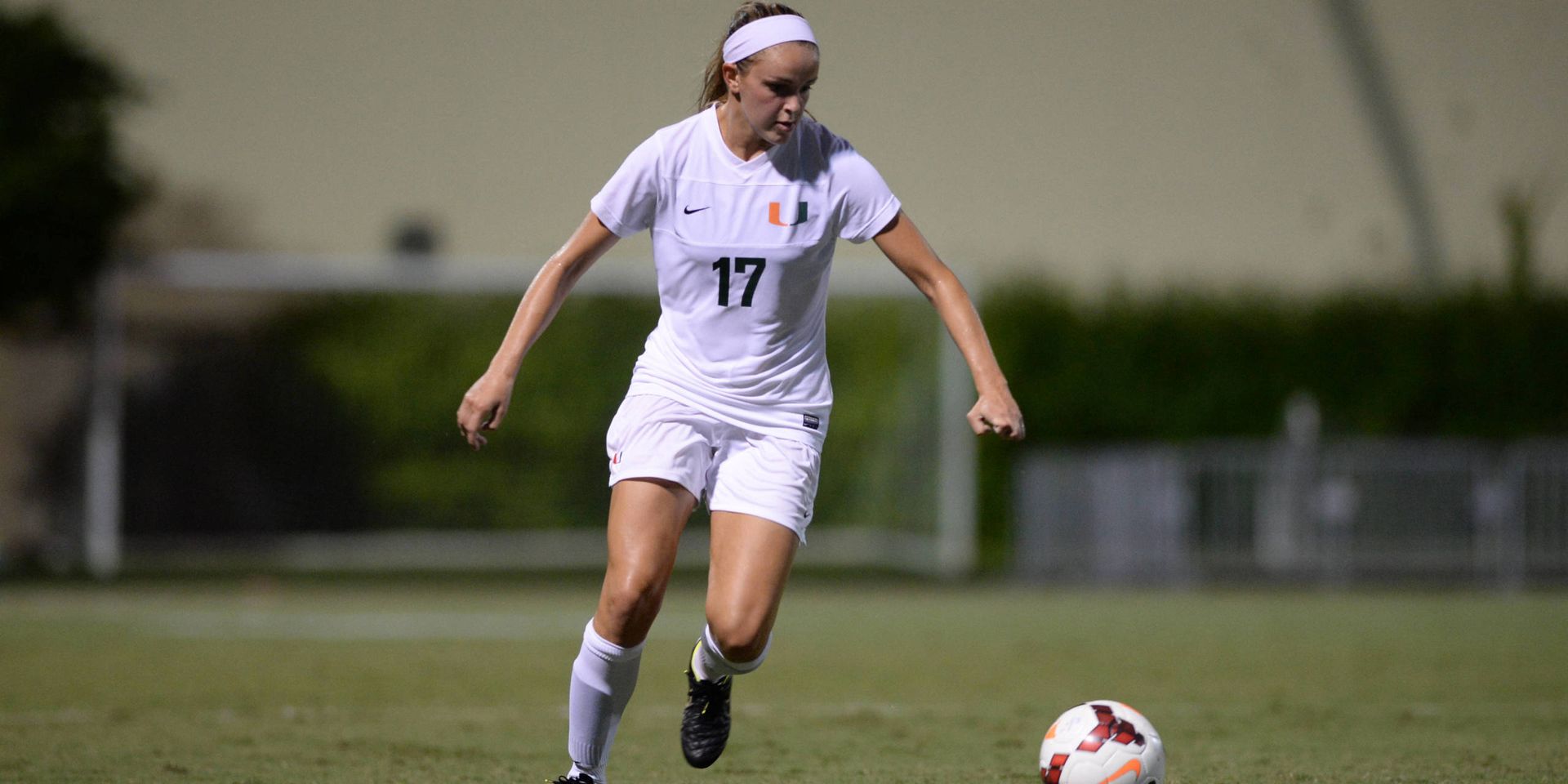 CORAL GABLES, Fla. – The University of Miami soccer team put forth a tremendous effort against No. 14 Florida in its home opener Thursday night at Cobb Stadium, but fell 4-2 after a wild second half.

All six goals were scored after the break, with junior forward Savannah Jordan netting a hat trick for the Gators to push them to the victory.

The Hurricanes had the first solid chance of the evening in the 13th minute when redshirt senior midfielder Erin McGovern put the ball on net from just beyond the box. Florida goalkeeper Valerie Tysinger made the save though, diving to her right to block the ball away.

Redshirt sophomore goalkeeper Catalina Perez, in the first start of her career, made a pair of saves in the 20th minute for the Hurricanes on long shots from the Gators. Stellar play on the back line from freshman defender Maisie Baker helped keep the match scoreless entering the halftime intermission.

After a quiet opening to the second half, the goals began to come fast and furious, with five in a matter of just over nine minutes. It was Miami (0-2-0) junior forward Gracie Lachowecki who struck first, as she received a pass from senior forward Amy Schmidt and found the back of the net from the corner of the box in the 56th minute. It marked the first assist of Schmidt’s career.

Despite falling behind, the Hurricanes would not relent. Freshman forward Jamie Brunworth, making her regular season debut for Miami, evened the score at two in the 62nd minute, with Lachowecki this time supplying the assist.

“We scored, they came back [with two goals] and then we scored again. So, it goes to show that this time wants to fight. They’re not going to put their heads down when a goal gets scored on us. I’m proud of that because I think last year we would have put our heads down. This year they’re really committed and they’re really focused, and we have a great culture right now.”

The sudden scoring barrage ended in the 66th minute on a go-ahead goal from Florida freshman midfielder Sarah Troccoli, assisted by Jordan.

That would not be the final tally of the evening though, as Jordan found the back of the net again in the 85th minute. Freshman midfielder Mayra Pelayo assisted on the goal for the Gators, who held strong the rest of the match for a 4-2 victory.

The Hurricanes return to the field Sunday afternoon at 1:00 p.m. against UCF (1-1-0), who is receiving votes in the NSCAA Coaches Poll. The match will be broadcast live on ESPN3 HERE, with live stats available HERE.

To learn more about University of Miami soccer, follow @CanesFutbol.