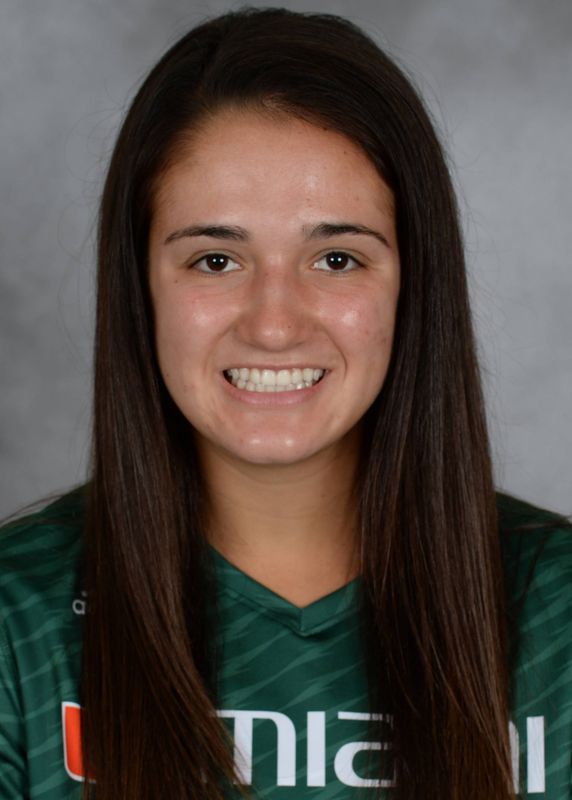 2016 (Sophomore): One of 10 Hurricanes to play in all 19 matches, earning the starting nod in all but one … Registered one assist, two shot attempts and one shot on goal … Tied for eighth on the team with 1,396 minutes of action … Went the distance in five matches … Played 80-plus minutes nine times and 60-plus on 15 occasions … Recorded one shot on goal in the season opener at North Florida (8/19) … Played all 90 minutes in the win at Stetson (8/21) … Went the distance in the home opener against Ohio State (8/26) and earned her first point of the season with an assist on Miami’s match-tying goal in the 47th minute … Played all 90 minutes in the victory over second-ranked Virginia (9/22) … Went the distance in the shutout against Syracuse (9/25) … On the field for all 110 minutes in the ACC Championship quarterfinals at No. 14 Clemson (10/30).

2015 (Freshman): Played in 16 matches and started 11, including each of the final eight of the season … Finished fourth on the team with three assists … Logged two shot attempts … One of eight Hurricanes to log over 1,000 minutes played, ending the year with 1,044 … Played 55-plus minutes 13 times … Went the distance on four occasions, including in three of the final four matches … In conference play, tied for eighth in the ACC in assists (three) and tied for ninth in assists per game (0.30) … One of 13 players in the ACC to record multiple assists in a match … Made her college debut with 25 minutes of action against No. 14/10 Florida (8/27) … Received her first starting nod at Florida Atlantic (9/4) and played 74 minutes … Tallied her first-career shot attempt in the victory at Jacksonville (9/6) …Played the full match for the first time in the double overtime win over No. 14/4 Notre Dame (10/2), logging 106 minutes … Earned the first point of her career by assisting on the golden goal in the 109th minute of Miami’s victory against NC State (10/11) … Registered her first-career multiple-point outing by tallying a pair of assists at Boston College (10/25).

Personal: Full name is Niccola Marie Venezia … Name is pronounced Nih-COLE-Uh Vuh-NEE-Zee-Uh … Born March 7, 1997 … Parents are Michael and Donna Venezia … Father works in real estate and mother is an administrative assistant … Has a younger sister, Francesca, who plays soccer at Boston College … Majoring in health science … Favorite athlete is Carli Lloyd because she is a great, hard-working player and they play the same position … Best sports memory is winning the Region I Premier League championship in 2014 … Enjoys biking, running and traveling … Chose Miami because of the coach, conference, environment, academics and location … Committed to Miami over Boston College and Penn State.