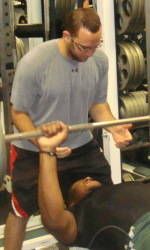 CORAL GABLES, Fla. –The University of Miami men’s basketball team has adapted to many changes in the past few months with the addition of coaches and new philosophies. Now the team is learning how basketball is not just about playing defense and shooting a basketball, it’s also about the weight room.

Since Strength and Conditioning Coach Jim Krumpos joined the staff in the spring, the men’s basketball team has increased its strength and speed exponentially.

“I’m extremely happy and proud of our guys and their accomplishments this offseason,” said Krumpos. “The guys dedicated themselves to our training program and philosophy and it has paid off.  While the improvements in numbers are great, what I really take pride in is when the guys tell me they can do things on the court they couldn’t before they started training with me.”

The players were first tested in various strength and agility tests in late May, then were checked again the first week of October.

Within those five months, the Canes tremendously improved their team averages on the one-step vertical jump (two inches), the bench press average maximum (26 pounds), the 185 test (3.7 reps) and the mile run (90 seconds).

In the 185 test, bench pressing 185 pounds as many times as possible, Johnson upped his mark by eight reps and Adams added seven more up-and-downs.

Adams and Jones also had major improvements in the chin up (body weight plus weight attached to a belt), notching 69 more pounds per pull up than their previous mark.

In the mile run, Justin Heller and Durand Scott each knocked off at least three minutes from their original time, while Jones took two fewer minutes on his second testing. Akpejiori ran a team-best mile with a time of 5:22, closely followed by Rion Brown at 5:23.

Below is a table of individual performances by the University of Miami men’s basketball team.