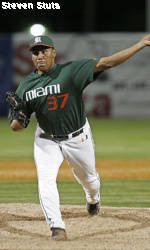 TALLAHASSEE, Fla. – Six Hurricane relievers combined to allow just one run in 5 2/3 innings as No. 9 Miami earned a come-from-behind, 6-5 victory over No. 6 Florida State Friday night in front of 5,559 at Dick Howser Stadium.

Trailing 4-1 after four innings, Miami scored two runs in the fifth and three more in the sixth to take a lead that UM’s bullpen would hold on to. Jerad Grundy (2-0) earned his second win of the season – tossing 1 1/3 scoreless in relief – while Daniel Miranda allowed a run in two innings of work to earn his fourth save of the season.

After pulling to within one after five innings, Chris Pelaez put the `Canes ahead, 5-4, with a two-run double to left-center before Nathan Melendres’ sacrifice fly to right moments later gave the `Canes what proved to be their winning run.

Pelaez finished the night 2-for-4 with a run scored and two RBI while Harold Martinez also went 2-for-4, hitting his team-leading 13th homer of the season and scoring a pair of runs. Stephen Perez also homered, going 1-for-3 with a two-run blast in the fifth that brought UM back in the game after it fell behind by three.

Martinez hit his seventh homer in UM’s last 13 games with a solo blast to left-center in the top of the second to open the night’s scoring.

The Seminoles tied it up at 1-1 in the bottom of the second however, scoring a man from second on a UM error.

FSU took the lead in the third on a solo shot to left by McGee before adding two more runs on a pair of bases-loaded wild pitches by Encinosa in the fourth to go up 4-1.

Perez quickly brought UM to within one in the top of the fifth with his two-run blast to left-center.

After Pelaez and Melendres gave UM the lead in the sixth, FSU loaded the bases in the sixth and seventh innings but was unable to plate any runs. In the seventh, a line shot in the right-center gap was run down and caught against the wall by Zeke DeVoss, saving the lead and likely keeping all three FSU runners from scoring. The Seminoles stranded a season-high 13 men on the night.

McGee’s second homer of the game in the eighth cut UM’s lead to just one but Miranda closed the door in the ninth to give the `Canes the series opener.

Game two of the three game set will be played Saturday at 1 p.m. and will be televised live on FS Florida. Lefthander Eric Erickson (4-1, 2.51 ERA) will start for the `Canes while the Seminoles will counter with lefty Brian Busch (4-0, 2.55 ERA).