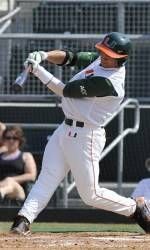 Despite scoring seven runs for the sixth straight game to open the season, Miami (5-1) struggled to keep up with Manhattan (1-2) throughout the game as UM pitchers allowed 17 hits and eight walks on the afternoon.

Jason Santana (0-1) suffered the loss for the `Canes, allowing six runs on nine hits while walking two and striking out two in 3 1/3 innings of work. Miami’s bullpen didn’t fare much better as veterans Daniel Miranda and Iden Nazario combined to allow six runs while recording just one out. Freshmen Eric Whaley and Jerad Grundy did however pitch well, combining to toss 4 2/3 scoreless in relief.

Stephen Perez led UM at the plate with a 3-for-4 performance while Scott Lawson, David Villasuso and Zeke DeVoss all had two hits – including homers by Lawson and Villasuso.

Manhattan starter Mike Gazzola (1-0) earned the win despite allowing seven runs on eight hits in five innings of work. John Soldinger had the best outing of any pitcher Sunday, tossing four scoreless innings in relief of Gazzola to earn his first save of the season.

Five Manhattan hitters finished with multiple hits, including Mark Onorati who went 4-for-6. Chad Salem (1-for-4) and Austin Sheffield (3-for-5) combined on six RBI on the afternoon.

Manhattan jumped out to an early 2-0 lead in the first. After Kevin Nieto led off the game with double, a single up the middle by Mike McCann scored Neito from second before Austin Sheffield followed two batters later with a double of his own to right, scoring McCann from first.

Perez drove in Miami’s first run of the game, scoring Michael Broad from second on a single to left in the bottom of the second. DeVoss followed that up with a single of his own, scoring Perez to tie the game up at 2-2.

The Jaspers broke the game open in the fourth, scoring seven runs on six hits and three walks to take a 9-2 lead. Manhattan batted around in the frame, chasing Santana and eventually Miranda as the pair combined to allow all seven runs in the inning. Whaley came on after Miranda failed to record an out and stopped the rally, but it wasn’t until the `Canes were down seven.

A pair of homers in the bottom of the fifth helped bring the `Canes within four. After DeVoss reached on a bunt single, Lawson hit his first homer of the season with a line drive shot to right. Two batters later Villasuso hit a deep solo shot down the line in left, bringing the score to 9-5 after five.

The first two batters of Miami’s sixth – Chris Pelaez and Broad – walked to lead off the inning – setting up a Rony Rodriguez line drive double to center that brought both guys around to bring the `Canes within two.

Manhattan got three runs back in the seventh to take the 12-7 lead. A single through the left side with runners on second and third by McCann scored the first run of the inning before a two-run double to left by Salem put the Jaspers up five for good.

The Hurricanes will make their first road trip of the 2010 season this week as UM travels to Tampa to take on USF Tuesday at 4 p.m. at George Steinbrenner Field.

SERIES NOTES
– After just one at-bat in the season-opening series against Rutgers last weekend, Michael Broad led the `Canes offensively against Manhattan, going 4-for-9 with four walks, two RBI and a team-high six runs scored.
– Chris Pelaez extended his season-opening hitting streak to five games with a single Sunday afternoon. Pelaez went 4-for-6 on the weekend and now leads the team with a .706 average (12-for-17) through the first two weekends.
– The `Canes scored 32 runs on the weekend and have now scored 63 through the season’s first six games.
– Miami pitchers struck out 31 batters in the three-game series, including nine strikeouts from both Friday starter Eric Erickson and Saturday starter Chris Hernandez.
– Yasmani Grandal led the `Canes with five RBI on the weekend while three others (David Villasuso, Harold Martinez and Rony Rodriguez) all finished with four.