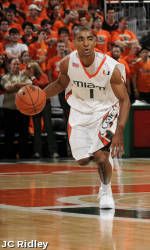 Men's Basketball Takes on Florida in NIT's Second Round

GAINESVILLE, FLA… – The fourth-seeded University of Miami men’s basketball team heads to Gainesville to take on top-seeded Florida in the second round of the National Invitation Tournament on Friday, March 20 at 7 p.m. ESPNU will broadcast the game live.

The Hurricanes have advanced past the first round of postseason play in back-to-back seasons and in each of their last three trips to the postseason (2009 NIT, 2008 NCAA, 2006 NIT). It is also the third time Miami has advanced into the second round of NIT play in nine appearances (1963, 2006, 2009).

Friday’s winner will take on second-seeded Penn State (24-11), who knocked off sixth-seeded Rhode Island on Thursday, 83-72.

Since 1997-98, the Hurricanes have won 18-plus games seven times — including three times in the last four years under Haith. Miami has now reached 19 wins for the 13th time in program history, for the sixth time since the basketball program was brought back in 1985-86 and for the second time under Haith.

THE SERIES
Florida leads the all-time series versus Miami 44-22 and has won two of the three meetings between the teams over the last decade. The Hurricanes last defeated the Gators, 72-65, on Dec. 4, 2004, in Gainesville.

Seniors Jimmy Graham and Brian Asbury and redshirt junior Adrian Thomas are the only Hurricanes who have faced the Gators during their Miami careers — a 77-67 home loss during their freshman seasons (Dec. 22, 2005). Graham started that game and finished with two points, three rebounds, a pair of blocks and steal in 19 minutes. Thomas posted two points and two boards in three minutes. That was one of just two games that Asbury has not played in over his four-year Miami career.

DID U KNOW…
As a freshman, senior sharpshooter Jack McClinton played at Siena — his head coach was current Florida assistant Rob Lanier.

Tito Horford — father of former UF standout Al Horford — played collegiate basketball for the Hurricanes from 1986-88 before declaring for the 1988 NBA Draft, where he was selected by the Milwaukee Bucks in the second round (39th overall). He led the team in blocked shots and rebounding in both seasons with Miami and still ranks third in single-season blocks (80 in 1987-88) and fifth in both career field goal percentage (.511; 313-613) and career blocks (125).

The Hurricanes have had a busy Spring Break on the road. Miami departed for Providence on Monday evening, knocked off the Friars on Wednesday night and then got back in the air on Thursday to head straight to Gainesville.

That lineup went 6-0 — knocking off St. John’s at Madison Square Garden, North Carolina Central and Florida Atlantic at home, at Boston College and at home versus Maryland and Wake Forest (a 27-point win over the Demon Deacons — the largest margin of victory for the Hurricanes in ACC play). Those starters picked up their first loss in overtime at Cameron Indoor Stadium versus Duke, but then returned to the court in the postseason to defeat Providence on the road.

SPRING BREAK IN PROVIDENCE
Jack McClinton scored a game-high 25 points — including a career-high tying seven three-pointers — to lead the fourth-seeded Hurricanes past fifth-seeded Providence, 78-66, in the first round of the National Invitation Tournament on Wednesday at PC’s Dunkin’ Donuts Center.

McClinton’s 25 points marked the 37th game of his career with at least 20 points and the 16th time this season. He has scored 20-or-more points in three games versus Big East opponents this season (27 vs. UConn, 20 vs. St. John’s and 25 vs. Providence).

Dwayne Collins grabbed a game-high 12 rebounds — the most boards for a Hurricane in postseason play since Gary Hamilton pulled down 12 in the NIT first-round game at South Carolina on March 15, 2005. He also tied his season high with two blocks.

With seven three-pointers, McClinton broke his own school record for threes in a season with 98 in 31 games. (Last season he amassed 94 treys in 32 games.) He is first, second and third on the Miami list for single-season threes. In addition, he extended his ACC-long and school record three-point streak to 34-straight games. That ties for the 12th longest streak in ACC history (with Rashad McCants, Shammond Williams, Hubert Davis — UNC, Jason Williams — Duke).

McClinton also drained seven three-pointers in the first game of UM’s 2008 postseason, en route to a career-high 38 points in Miami’s NCAA first round win over St. Mary’s. He has hit seven treys three times, which ties for the third most in a game in Miami history.

UM’s .857 performance from the line (18-21) was the second-best for the team this season. They hit 1.000 of their free throws at home versus North Carolina — as Jack McClinton converted both of the team’s season-low two attempts.

James Dews dished out a season- and game-high five assists for the Hurricanes (with zero turnovers).

Jack McClinton  has scored in double-figures a team-high 15 times versus in-state opponents — including a 31-point effort versus Florida State in 2006-07 and a 28-point outing this season. Dwayne Collins has nine double-figure scoring games versus Sunshine State opponents, followed by Brian Asbury with eight and James Dews with seven.

On Feb. 18, Dews poured in a team- and season-high 19 points (just one point shy of his career high) versus the Seminoles — including a 3-of-5 effort from long range — and also grabbed a career-high seven rebounds in his first start since Dec. 31, 2008.

MIAMI IN THE NIT
Miami now has a 4-8 record in nine appearances in the NIT, with its best performance to date a 2-1 showing in 2005-06 — its last NIT appearance — in which the Hurricanes advanced to the quarterfinals. That year, the Hurricanes hosted their first postseason game in program history — a 62-59 home win over Oklahoma State in the first round. Then, Miami picked up its first NIT road win with a 53-52 victory at Creighton before falling at Michigan, 71-65, in the quarterfinals.