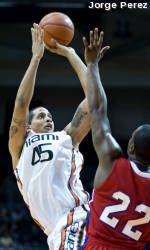 CORAL GABLES, FLA… – There is no rest for the No. 25 University of Miami men’s basketball team as the Hurricanes  play their second game in three days during final exam time. Miami knocked off crosstown-rival FIU, 76-50, on Friday and takes on Robert Morris on Sunday in game two of a three-game homestand at the BankUnited Center.

HOME SWEET HOME
Four Hurricanes are averaging double-figure scoring at home and six Miami players are putting up 8.5 points or more at home, led by Jack McClinton‘s 13.5 points and 3.3 assists per game at the “BUC”. Dwayne Collins averages a double-double of 11.3 points and 10.0 rebounds per game in Coral Gables. Eddie Rios is also excelling on UM’s homecourt with 11.0 points per game, shooting .571 from the field, .636 from long range (7-11) and  a perfect 1.000 from the charity stripe (2-2). Lance Hurdle adds 10.0 in three appearances at home, including 3.0 assists per outing.

THE SERIES
Sunday marks the second game between Miami and Robert Morris, with the Hurricanes leading the all-time series, 1-0, after a 66-51 win over the Colonials on Nov. 30, 1994 in Miami.

James Dews (Lakota East High School) and Robert Morris’ leading scorer Jeremy Chappell (Northwest High School) both hail from Cincinnati and are friends off the court. Growing up the two often faced each other in AAU games.

A SEASON FOR GIVING
The Miami men’s & women’s basketball teams have teamed up with the United States Marine Corps & the BankUnited Center to participate in the 2008 holiday Toys for Tots Program, collecting toys for underpriviledged children this season.

All fans that bring an unwrapped toy with them to any of the following games (Men: FIU, Robert Morris: Women: Binghamton, Grambling State) will receive a free ticket voucher for each unwrapped toy donated.

BLOCK PARTY
Miami’s season-high 13 blocks in Friday’s win over FIU was almost three times the previous season best (5 vs. Kentucky and Ohio State) and marked the most since registering 16 against Florida Atlantic on Nov. 29, 2004. That was the same night Anthony King posted the only triple-double (11 pts., 10 rebs., 13 blocks) in school history.

Graham leads the Hurricanes with 13 blocks in 2008-09 for a team-high 1.6 blocks per game average — tying for fourth best in the ACC. His 6.5 rebounds per game — second best on the squad — ranks 18th in the league. He pulled down a team-best seven boards in Friday’s win over FIU.

SLAMMING IT HOME
Miami’s big men Dwayne Collins and Jimmy Graham often bring Hurricanes fans to their feet with powerful dunks, however another UM player got in on the action in Friday’s win over FIU. With 1:28 to go Adrian Thomas stole the ball and fed it to six-foot sophomore point guard Eddie Rios who slammed it home for the Hurricanes’ 73rd point of the evening. It was his first dunk in a Miami game.

ON OFFENSE
Miami’s 42-26 halftime lead versus FIU marked the seventh time this season (in eight games) that the Hurricanes have held a double-digit lead at the break, one shy of the eight total they posted during the entire 2007-08 campaign.

Five of the Hurricanes’ six wins this season — and eight of their last nine overall dating back to March 5, 2008 — have been by double figures. In six victories in 2008-09, Miami has won by an average of 21.2 points — including a season-high 36-point margin in the 96-60 season-opening win over Florida Southern.

The Hurricanes have scored 70 or more points in six games this year, including three of the last four.

ON DEFENSE
Miami’s defense limited FIU to just 30.2 percent shooting from the field — the second lowest field goal percentage posted by a UM opponent this season. MIami — who is ranked 29th nationally (3rd ACC) in field goal percentage defense and second in the ACC in scoring defense — has kept half of its opponents this season to 60 points or less.