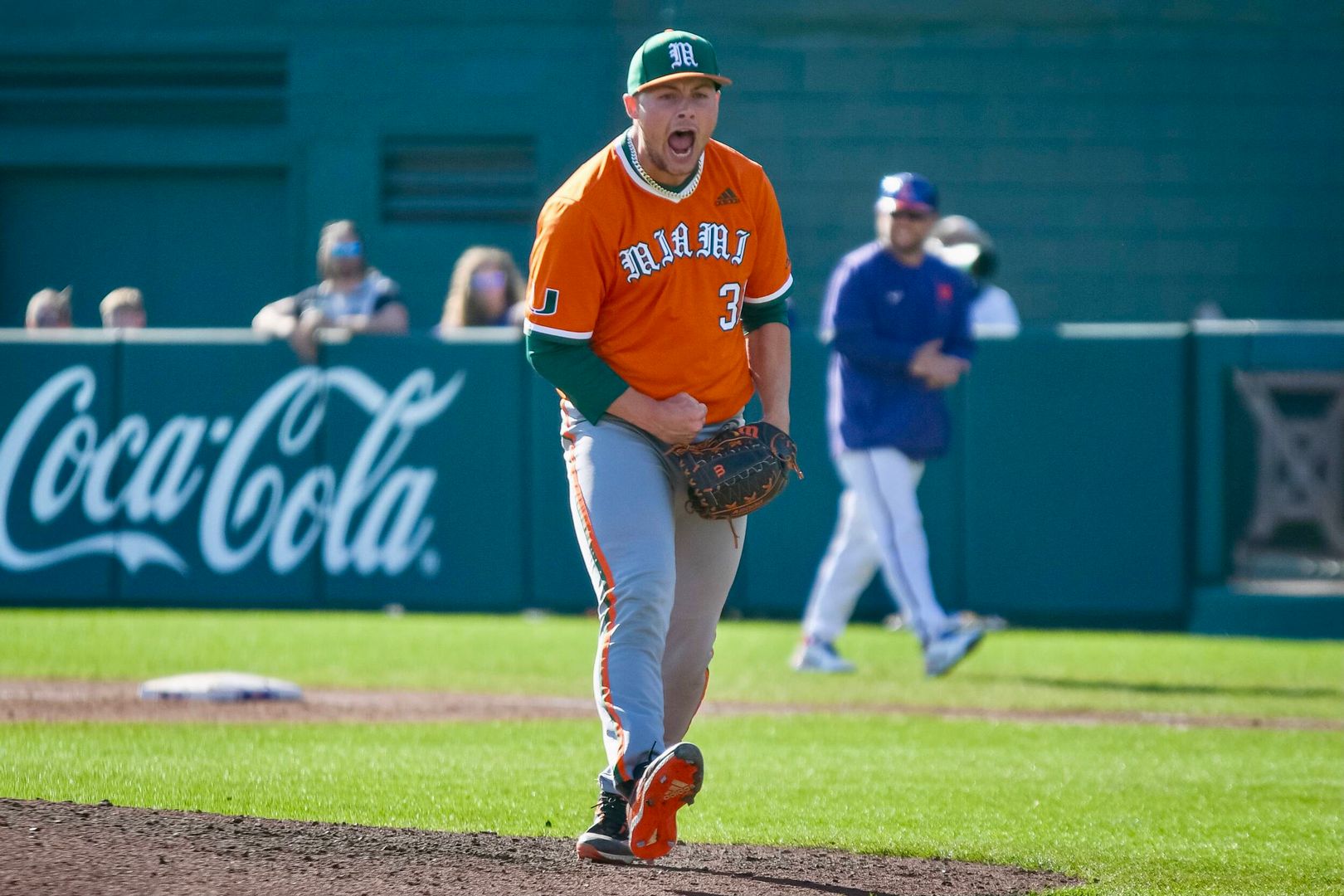 After stranding the tying run in scoring position and the go-ahead tally at first, Ziehl was pumped up.

Ziehl kept the Hurricanes ahead, 2-1, after six innings before Maxwell Romero Jr. tacked on two insurance runs an inning later to clinch the series with a 4-1 victory over No. 18 Clemson at Doug Kingsmore Stadium Saturday afternoon.

“That last batter was fighting a lot of pitches,” said Ziehl, who struck out Clemson left fielder J.D. Brock after a 10-pitch battle. “I finally got one and he swung and missed. It fired me up and I wanted the team to get some energy. That next half inning, we scored some more runs and I went out there with a three-run lead. The rest is history.”

For the second straight game, the Hurricanes (13-5, 4-1 ACC) produced with two outs.

With a runner on and two outs in the seventh, Clemson (14-3, 0-2 ACC) intentionally walked Miami third baseman Yohandy Morales, setting up a lefty-on-lefty matchup. 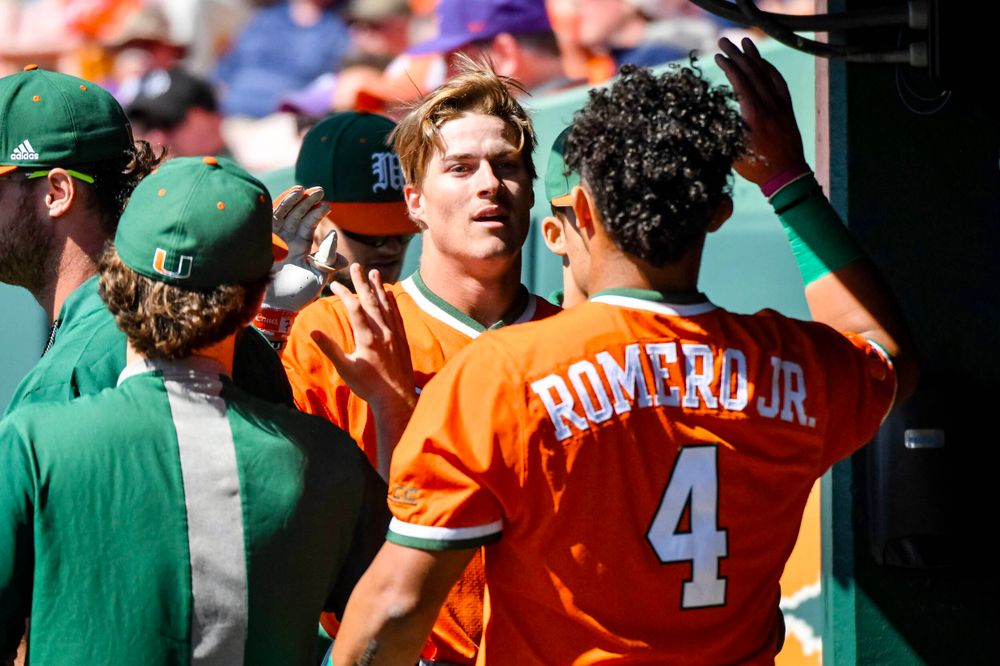 After a wild pitch pushed both runners into scoring position, Romero Jr. delivered a two-run two-out opposite-field single to extend the Hurricanes’ lead to three.

“Anytime they intentionally walk someone in front of you, it gives you an edge,” Romero Jr. said. “He threw me a slider and I fouled it off early in the at-bat. After that, it was a two-strike approach. I saw it and poked it the other way and did what I could to help this team.”

“That’s a big win for us,” Miami head coach Gino DiMare said. “Of all the games we’ve played so far that was probably the toughest and gritty. Having to battle late in the game, that’s what you want. We’re going to have to play a lot of games like that.”

The Hurricanes grabbed an early 1-0 advantage behind Jacob Burke’s solo shot in the second.

After Clemson tied the game with a run in the fourth Miami jumped back in front in the sixth.

With two outs, Burke was hit by a pitch and second baseman Dorian Gonzalez Jr. singled to left center, moving Burke to third.

Standing 90 feet away, Burke scampered home on a wild pitch, igniting the Hurricanes in the third-base dugout.

“Anytime you can win a series in the ACC, at home or on the road, is huge,” Walters said.

The Hurricanes will look for their first sweep in ACC play when Miami and Clemson meet for the series finale Sunday. First pitch is set for 1 p.m. 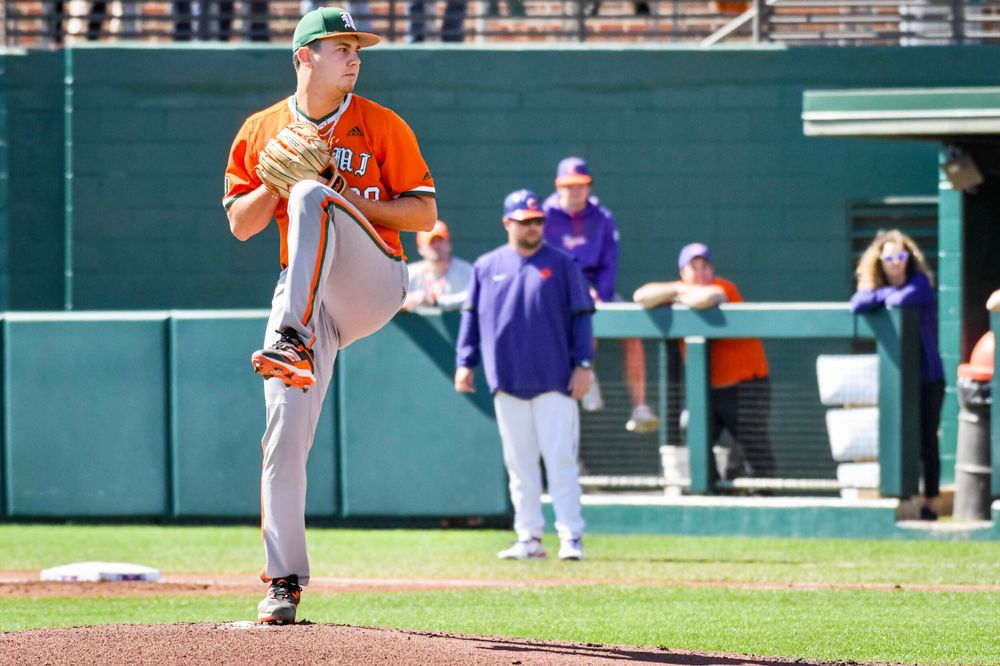