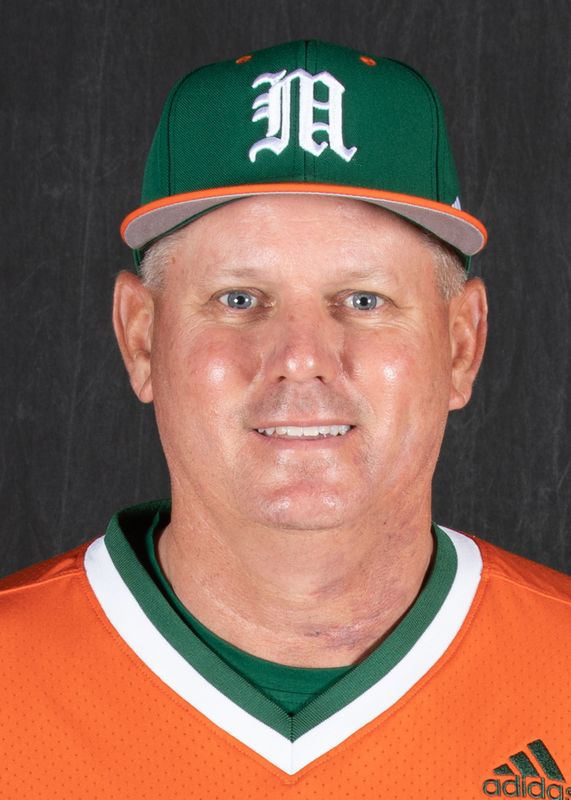 DiMare previously served as associate head coach in charge of hitting, as well as the baseball program’s recruiting coordinator. Overall, 2022 marked DiMare’s 23rd year as a member of the Hurricanes baseball staff. DiMare rejoined the University of Miami baseball program after three years away from the program in 2011. Prior to his exit in 2008, DiMare served as the Canes recruiting coordinator and hitting coach over his final nine seasons. He held the title of assistant head coach during the 2008 season – a year the Canes won the Atlantic Coast Conference championship before advancing to the College World Series.

In DiMare’s four seasons at the helm of the Hurricanes, Miami has proved to be one of the top teams in the country, qualifying for the postseason in each year the NCAA tournament was held.

The 2022 Hurricanes earned a national seed and hosted a regional for the first time since 2016. Miami tallied a 40-20 overall record, leading the ACC with 20 conference wins. The Hurricanes were ranked as high as No. 2 nationally, notching a 14-game winning streak, which is the program’s longest in eight years.

In a year that began with a series victory at preseason No. 1 Florida, Miami finished the regular season second in the ACC Coastal and returned to the postseason for the second time under DiMare’s leadership in 2021.

During the shortened 2020 campaign, the Hurricanes went 12-4 and ended the year ranked fifth by Baseball America. A preseason pick to win the Coastal, Miami won all three contests in conference play before the COVID-19 pandemic shut down the season prematurely.

The Hurricanes had an impressive first season under DiMare, winning 41 games and qualifying for the NCAA postseason for the first time since 2016. Miami received the 46th postseason berth in school history and reached the Starkville Regional final before falling to No. 6 Mississippi State. The Hurricanes amassed an 18-12 mark in ACC play in 2019, winning seven conference series and turning in their best conference record since 2016.

Since DiMare was elevated to head coach ahead of the 2019 campaign, 12 Hurricanes have been selected in the MLB Draft, including first-round pick Slade Cecconi in 2020.

DiMare’s teams have excelled in the classroom as well, as 15 student-athletes have earned a spot on the ACC All-Academic team, with three players earning multi-year bids. Additionally, Christian Del Castillo was named an Academic All-American in 2021.

With DiMare as associate head coach, the Hurricanes qualified for their second straight College World Series berth and 25th in program history in 2016. Under DiMare’s guidance as hitting coach, five field players (Zack Collins – first round, Willie Abreu – sixth round, Brandon Lopez – 10th round, Jacob Heyward – 18th round, Johnny Ruiz – 28th round) were selected in the 2016 MLB First-Year Player Draft. Collins was named a first-team All-American by several publications, and became Miami’s first first-round draft pick since Yasmani Grandal in 2010 when he was selected by the Chicago White Sox with the No. 10 overall pick.