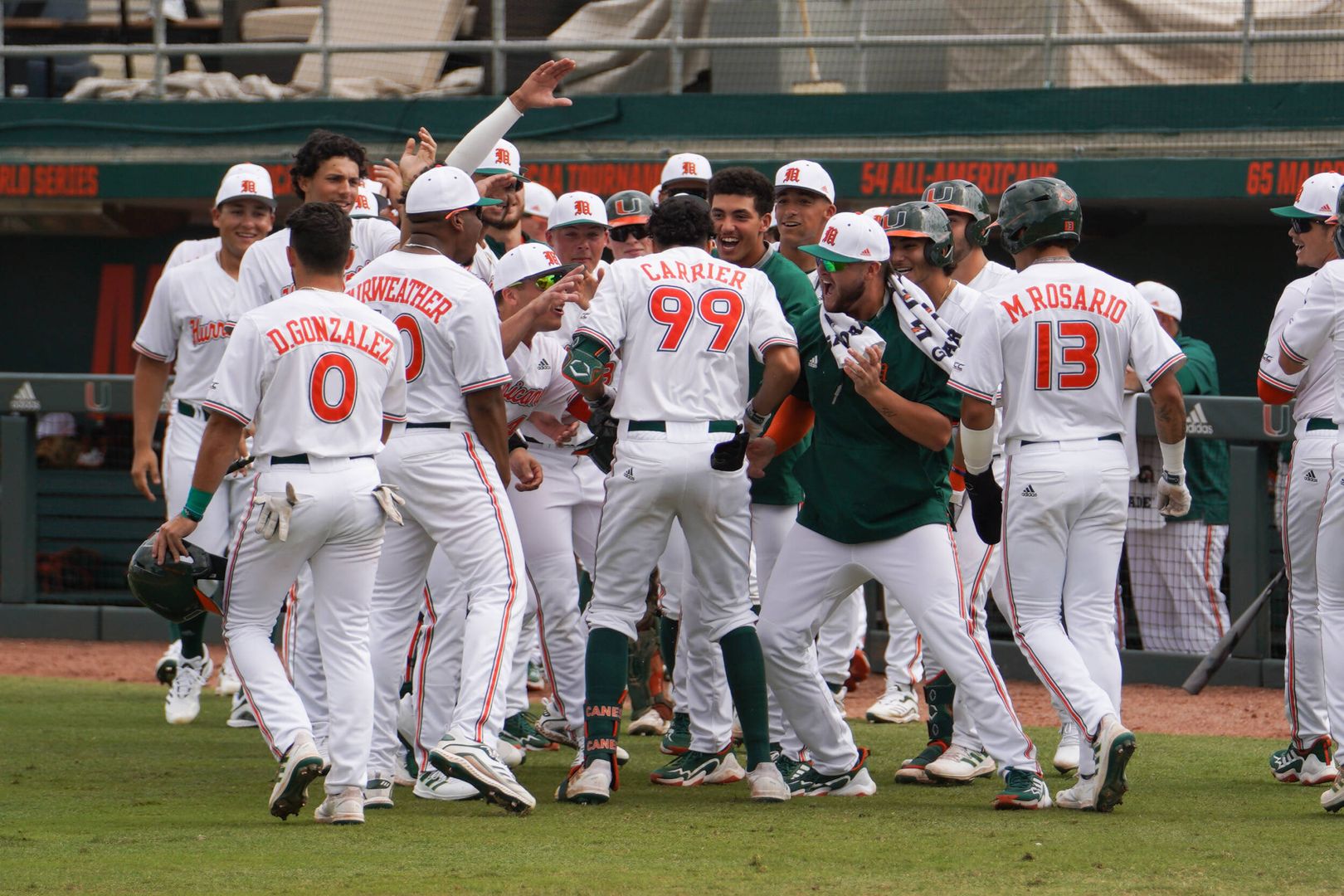 CORAL GABLES, Fla. — The University of Miami baseball team made history in its Opening Weekend of the 2022 campaign.

For the first time in their rich 78-year history, the Miami Hurricanes scored at least 10 runs in four straight games to begin the season, capped off by an 11-1 victory over the Towson Tigers Sunday afternoon.

The Hurricanes (4-0), who secured their first sweep of the year, outscored the Tigers (0-4) by 32 runs across the four-game set.

“It’s a good start to the season,” Miami head coach Gino DiMare said. “I’m obviously happy with the way we swung the bat. That was one of the things coming into the season, the seven new guys in the lineup, we were not quite sure how it was all going to unfold. I was really pleased with the overall approaches at the plate.”

As a team, Miami batted .309 and scored 45 times on the weekend. Seven different Hurricanes combined to blast eight home runs in the series.

On Sunday, after Towson jumped on the board in the opening inning, Miami responded with 11 unanswered runs. The Hurricanes scored four runs in both the third and fourth frames, taking control of the series finale.

With one swing, freshman outfielder Lorenzo Carrier drove in all four tallies in the third. Carrier crushed a 102-mph missile over the left-center field wall, smacking his second homer in as many days.

“This is unlike anything I’ve ever felt,” said Carrier, who led the Hurricanes with seven knocks, including five extra-base hits, against the Tigers. “Obviously, college baseball, there’s nothing like it. Just to be able to get the full Miami Hurricane experience this weekend, it was a joy. The two home runs were probably the two best moments of my life so far.”

One inning after Carrier’s grand slam, junior catcher Maxwell Romero Jr. joined in on the home run derby. Romero Jr. launched a three-run rocket over the fence for his first round tripper as a Hurricane.

“It’s everything I’ve been ever dreaming of,” Romero Jr. said. “I was just looking for something that I could hit hard and move them over. I’m glad to help produce runs for this team in any way and in any form.”

Even after Romero Jr. put the Hurricanes up, 7-1, Carrier padded Miami’s cushion.

“He was one of the top recruits in the country and we’re very fortunate that he actually pulled his name out of the hat for the draft,” DiMare said about Carrier. “We knew we were very fortunate to get him because he’s got a lot of ability. Obviously, the big tool is the hit tool, the power too. He’s a big guy that’s only going to get stronger.”

Third-year right-hander Alex McFarlane breezed through the Towson lineup. McFarlane surrendered zero earned runs and only two hits over five innings, striking out a career-high six along the way. 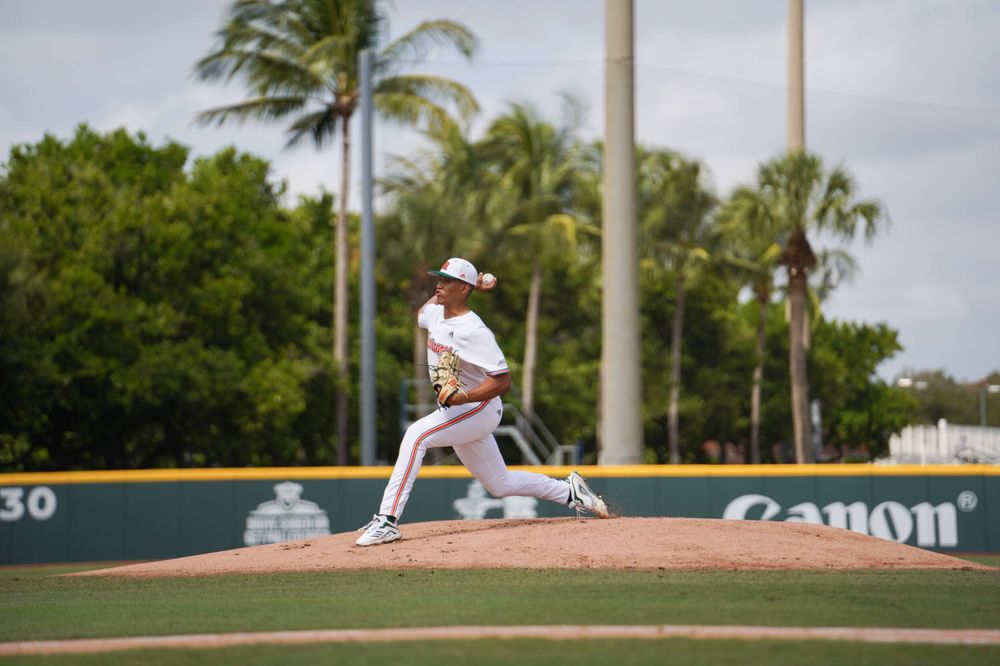 Redshirt junior Matt Raudelunas made his debut as a Hurricane after four years at St. John Fisher College. Raudelunas, who missed the 2021 campaign recovering from Tommy John surgery, pitched for the first time in 721 days. The southpaw tossed a scoreless sixth in relief of McFarlane.

JP Gates twirled a 1-2-3 eighth after having a season-ending operation last year, which marked his first appearance in 364 days.

Right-handed relievers Ronaldo Gallo and David Rossow both made their debuts in the orange and green, firing shutdown innings.

Overall, Miami’s pitching staff recorded a 2.00 ERA and held Towson to only a .161 average in the series.

After their historic sweep, the Hurricanes host FAU Wednesday at Alex Rodriguez Park at Mark Light Field. First pitch is slated for 6 p.m. 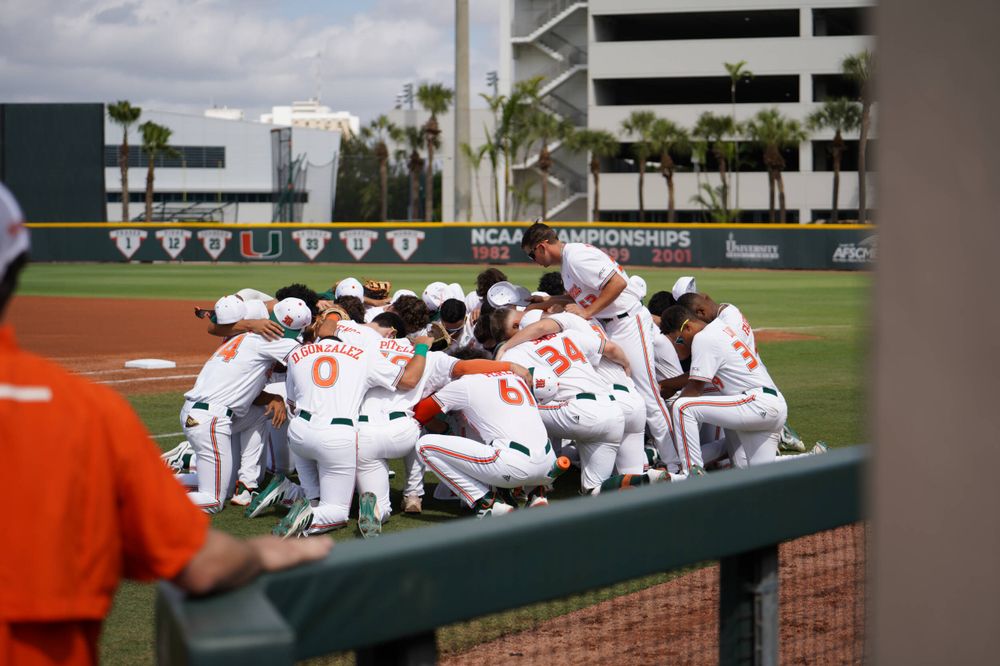