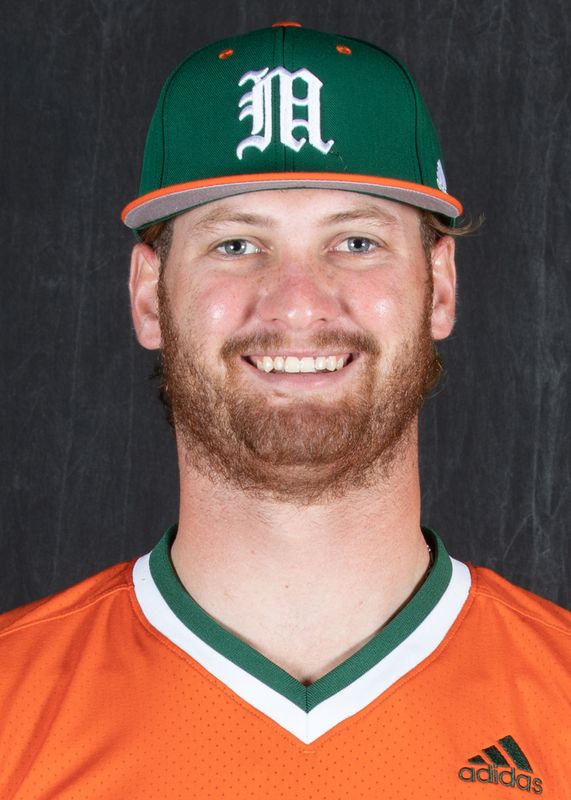 Sophomore (2020): Appeared in 11 games as a two-way player for the Hurricanes in shortened 2020 college baseball season…Made 11 starts as Miami’s designated hitter…Led Canes with nine appearances as a reliever out of the Canes’ bullpen…Had seven hits, one homer and two RBI over 38 at-bats…Went 1-0 with a 0.82 ERA over 11 innings pitched…Struck out 13 batters and walked just one, allowing just one run on two hits over nine appearances…Held opponents to a .056 batting average…Opened the season on a five-game hitting streak…Had a hit and a run scored in Opening Day win over Rutgers (Feb. 14)…Hit a solo homer in series-clinching win over Rutgers (Feb. 15)…Singled and drove in a run in win to sweep Rutgers (Feb.16)…Had two hits and a run scored against No. 2 Florida (Feb. 22)…Scored a run in victory over Towson (Feb. 29)…Did not allow a run over first eight appearances spanning eight innings…Did not allow a base runner over first four outings…Struck out only batter he faced in Opening Day win over Rutgers (Feb. 14)…Had a strikeout in scoreless inning against Kent State (Feb. 19)…Struck out two batters in two scoreless innings vs. No. 2 Florida (Feb. 21)…Had a strikeout over 0.2 scoreless innings against No. 2 Florida (Feb. 22)…Allowed first hit of the season over 0.2 shutout innings against Towson (Mar 1)…Had a strikeout over one scoreless inning against Pittsburgh (Mar. 6)…Fanned three batters in two shutout innings against Pitt (Mar. 7)…Struck out a career-best four batters over a season-high three innings of relief in win at No. 12 UCF (Mar. 11).

True Freshman (2019): Appeared in 42 games as a two-way player for the Hurricanes…Made 38 starts as Miami’s designated hitter…Pitched in 20 games, making one start on the mound…Batted .340 with nine doubles, two triples, four homers and 31 RBI in 147 at-bats…Posted 14 multi-hit games and seven multi-RBI performances…Ranked fifth on the team with a .510 slugging percentage…Posted 14-game hitting streak that was second-longest on team…Made his Miami debut against Rutgers, allowing one hit and striking out three in a scoreless inning of work (Feb. 16)…Threw a scoreless inning vs. UMBC (Mar. 1), the first of six straight shutout appearances…Went 2-for-3 with a double and an RBI in debut as a hitter vs. UMBC (Mar. 3)…Made first career start at designated hitter on Mar. 20 vs. Columbia…Hit pinch-hit two-run homer vs. NC State (Mar. 23) for first career home run…Went 5-for-12 with a double and three RBI at Pitt (Mar. 29-31)…Posted first career three-hit game on April 7 vs. Florida State…Made first career start on the mound on April 9 vs. FGCU…Homered in series finale at Virginia (Ap. 14)…Earned first career win as a pitcher at Louisville (Apr. 19)…Had a double and three RBI in final game at Louisville (Apr. 20)…Hit a home run and drove in three runs via FIU (Apr. 24)…Batted .615 (8-for-13) with a triple, a homer, seven RBI and three runs scored in Bethune-Cookman series (May 3-5)…Posted first career three-hit game and drove in three runs vs. Bethune-Cookman (May 4)…Drove in a season-best four runs and finished a double shy of the cycle vs. Bethune-Cookman (May 5)…Went 2-for-4 with a home run vs. UCF (May 8)…Had two hits and a run scored in series finale at Wake Forest (May 13)…Hit safely in all three games vs. Duke, (May 16-18), including multi-hit games on May 17 and 18…Had a hit and RBI vs. North Carolina in ACC tournament (May 24)…Recorded first hit and RBI in NCAA postseason vs. Southern (June 1)…Had two hits and two runs scored vs. Central Michigan for first career multi-hit game in NCAA postseason (June 2)…Singled in Starkville Regional finale vs. Mississippi State (June 2)…Named to Starkville Regional all-regional team.

High School: Played baseball for four years at Nature Coast Tech, serving as team captain in 2017-18…A talented two-way player, had 22 extra base hits, 10 doubles, 10 home runs and 48 RBI in 93 at-bats…As a pitcher, posted a 1.05 ERA and 135 strikeouts over 80 innings, won nine games, made 14 starts and threw six complete games…Was a three-time Player of the Year honoree…Threw a perfect game in which all 15 outs were strikeouts…Helped team to a 26-5 record in 2018.