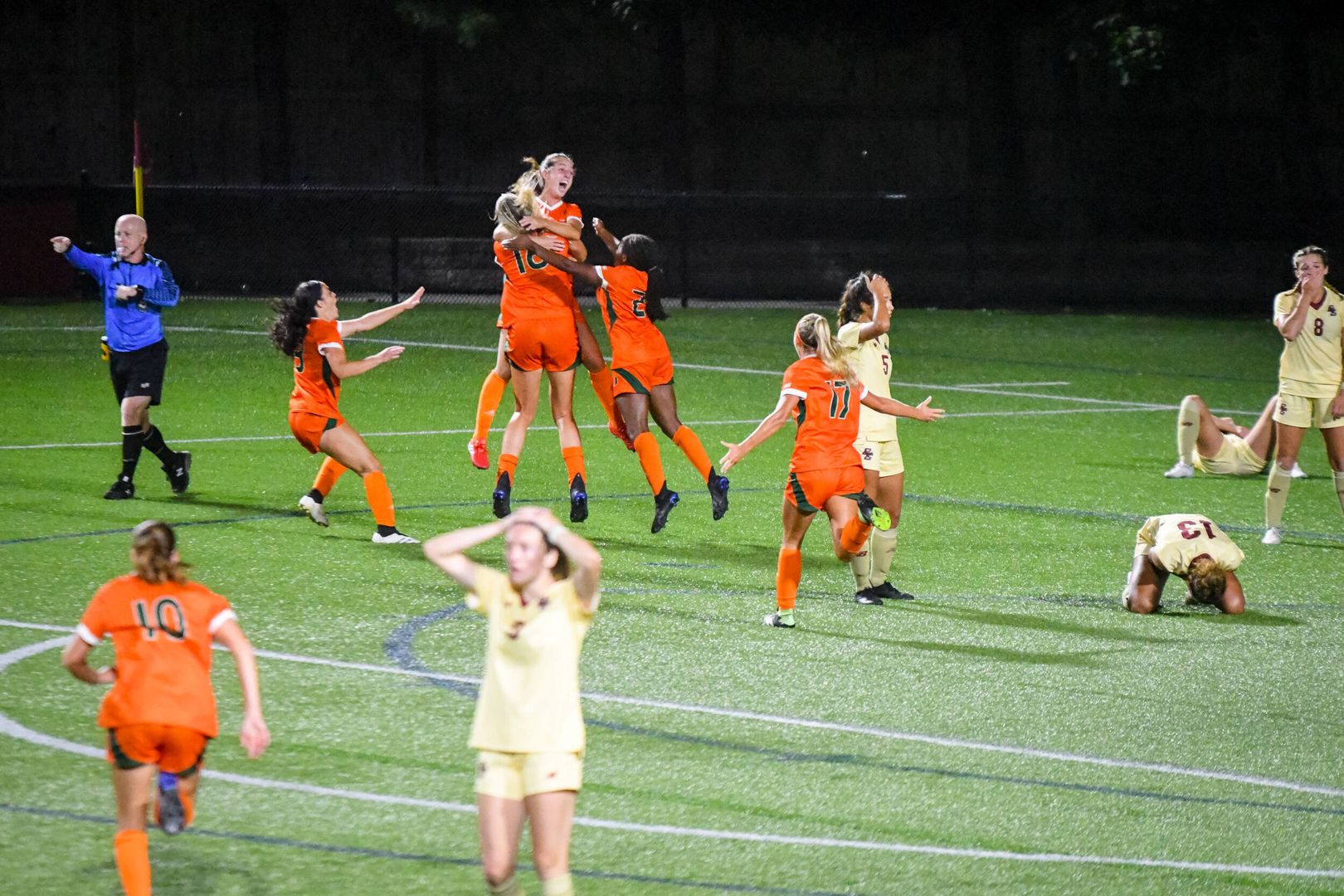 The ball bounced around off a couple of heads like a pinball and fell to Miami junior María Jakobsdóttir. Jakobsdóttir swung her left leg through, slicing the ball wide towards the end line. Katerina Molina raced it down and kept it from rolling out of bounds with five ticks on the clock.

Molina clipped the ball back towards the middle and Boston College attempted to knock it away, forcing overtime. The Eagles’ clearance try rolled to Miami redshirt sophomore Jackie Koerwitz, who rocked a left-footed shot.

Koerwitz’s strike rifled into the upper right corner as time expired, providing the Hurricanes with a 1-0 walk-off win over Boston College Saturday evening.

“It’s the football equivalent of a Hail Mary,” Miami head coach Sarah Barnes said. “The biggest thing is Kat Molina chasing that ball down, not allowing it to go over the end line for a goal kick. Taylor [Shell] was in there pressuring. Even though they got a clear, they didn’t get a good one because she fought so hard to try to score the goal. That set it up for Jackie to be able to smash the ball with her left foot into the goal. It was an incredible finish. It took a lot of people. This game, all 26 people were so invested, so committed to the team’s performance. The effort was outstanding.”

Miami (4-6, 1-3 ACC) rushed the pitch, embracing the Hurricanes’ hero following the game-winning goal. Koerwitz’s tally gave Miami its first-ever win against the Eagles in Newton and only its fourth victory in the all-time series.

“It was honestly surreal,” Koerwitz said. “I couldn’t believe that it happened. I was speechless just to be a part of something like that. To be the one to finish it was super awesome. I’ll probably never forget it for the rest of my life. It’s my favorite goal ever, my favorite game ever. I’m just excited to keep the momentum going for ACC play.”

The Hurricanes kicked off their ACC road slate in dramatic fashion, grabbing their first conference shutout since Oct. 25, 2018, when Miami downed No. 9 Florida State, 1-0, in overtime.

While it took until the final second to settle the match, Miami nearly broke the stalemate in the 18th minute.

Sophomore Gabriela Rusek lined up for a free kick 10 yards outside the box. Senior Captain Selena Fortich headed Rusek’s service into the back of the net, but the assistant referee signaled the play offside.

The Eagles (6-5-1, 0-4 ACC) registered their best scoring chance of the night in the 65th minute. Junior forward Sam Smith weaved her way to the top of the box and fired a bullet on frame. Dagenais leaped to her right, pushing the shot wide for a corner kick.

Dagenais, who entered Saturday evening second in the conference in saves per game, recorded a season-best eight saves, two shy of matching her career-high.

Miami defender Emma Tucker, who hails from Marshfield, Mass., was one of four Hurricanes to go the distance in her return home.

“We’ve talked about being relentless all season long. The performance from start to finish is the epitome of what we’ve asked from them, and what they’ve asked from themselves and each other. There were times we had to weather the storm and BC is a good team, but the team never wavered in their effort and their commitment,” Barnes said. “That’s what it takes in this conference to be successful. It’s a fantastic steppingstone. We’ve learned a lot from the last three games that have set us up for this moment.”

Up next, Miami takes on Wake Forest at 5 p.m. on Thursday, Oct. 7, in Winston-Salem, N.C. The match will be televised on Regional Sports Network.

“It’s a really nice feeling and it’s really nice to celebrate with everyone on the field,” Molina said. “This can definitely boost our confidence. It’s important to keep our minds on the right track and remember this feeling so it can happen again.”