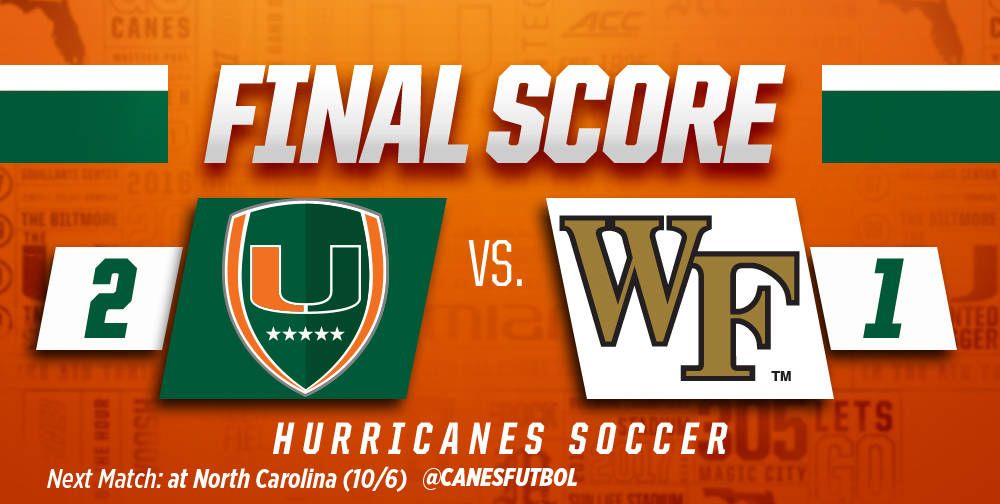 CORAL GABLES, Fla. – With a 2-1 victory over Wake Forest Sunday afternoon at Cobb Stadium, the University of Miami soccer team earned a third consecutive ACC win for the first time in program history.

“I’m really proud of them,” Miami head coach Mary-Frances Monroe said. “It’s not easy, even for us, to come out to a 2 o’clock match in the heat and I just thought that they stayed composed. They worked hard and got a great win.”

Miami opened the scoring with its earliest goal of the season, a fourth-minute tally on the first shot of the match.

In the middle of the field, Cason passed the ball to junior forward/midfielder Grace Rapp and she played it long to Lachowecki. The Evansville, Ind., native outran the Wake Forest (8-4-0, 0-4-0 ACC)back line and sent a one-time shot past junior goalkeeper Lindsay Preston.

For Lachowecki, it was her team-leading eighth goal of the season and the 21st tally of her career, moving her into a tie with Allison McWhinney for fourth on Miami’s all-time list.

“We asked them to get out of their comfort zone and play balls that we’re not typically used to playing. That’s what we did,” Monroe said. “Gracie, of course, she’s our go-to when we need a goal. I’m really proud of them, they scored early.”

Perea’s goal made it the first time all season Miami had both scored and conceded a goal in the first half. The score would remain deadlocked at one apiece entering the intermission.

The Hurricanes went back in front in the 58th minute on a goal by Cason. She received an outstanding cross from redshirt senior defender Shannon McCarthy and put it on frame, with the ball deflecting in past Preston. Freshman Kristina Fisher was also credited with an assist on the goal, extending her team lead with the sixth of her freshman campaign.

“Shannon is one of our hardest workers. She got on the end of a ball, she looked up, she found open space back post and she drove a ball in,” Monroe said. “Dejah, we were about to sub her because she couldn’t breathe anymore, and we told her one more run. She worked her butt of and got into the [18-yard box] and collected it and scored a great goal for us to win the game.”

In addition to winning three of its first four ACC matches for the first time, this is also the second time the Hurricanes have dropped just one of their first four, joining a 2-1-1 start in 2007.

“As a coaching staff, we’re as competitive as the players. We came in our first season and we put together a plan,” Monroe said of the team’s stellar start to conference action. “We knew it wouldn’t happen overnight and the players who are on the team right now trusted in that plan—every single player. Our seniors were here as freshmen with us and they truly committed themselves to what the coaching staff was doing. They implemented what we were teaching and even if they made mistakes, they worked extremely hard to help each other be successful.”

Miami has already clinched its best overall record and conference record since 2013, when it finished 9-8-1 (4-8-1 ACC). Also, the last time the Hurricanes scored multiple goals in three straight ACC matches was Oct. 13-23, 2011.

“We just think about the next game now,” Monroe said. “Enjoy this win, but now we regroup. They have a day off tomorrow [and then we will] regroup on Tuesday and we focus on Carolina.”

With a three-match homestand now complete, the Hurricanes will play the first of three consecutive road matches Thursday at No. 16 North Carolina. Kickoff is set for 7 p.m., and the action will be broadcast live on RSN, in addition to ACC Network Extra.