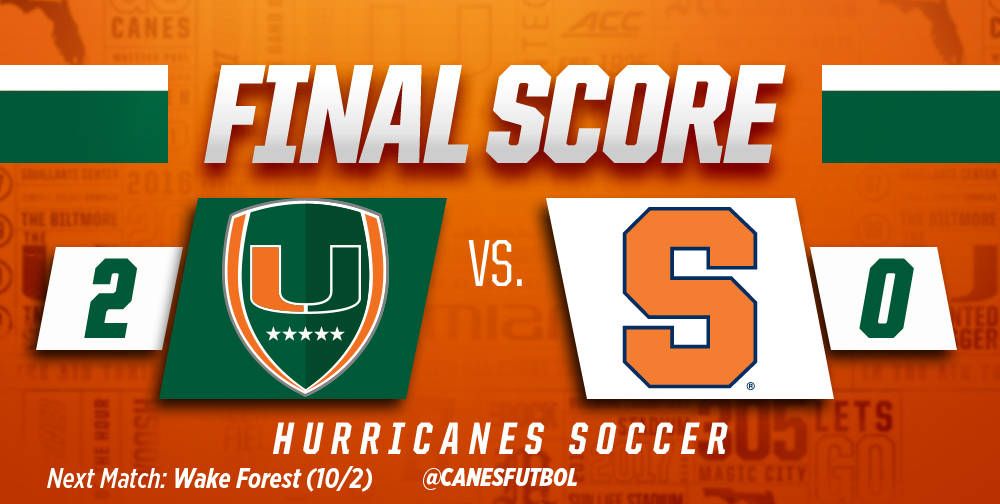 The shutout victory was the sixth of the season for Miami (7-4-0, 2-1-0 ACC), which outshot Syracuse (7-3-2, 0-2-1 ACC) by a 19-6 margin and had a 7-1 advantage in shots on goal. The Orange did not have a shot on goal until the waning seconds of the contest, as the Hurricane defenders were stellar throughout.

“Every game we try to go into with the same mentality, the same organization and . . . just make sure when we have opportunities we have to finish them,” Miami head coach Mary-Frances Monroe said of the team’s strong start to ACC play. “I think in some of the games, we had such wonderful opportunities, but we weren’t finishing them. Our back line has been doing a really good job of staying composed and I’m just really proud of them.”

Miami nearly went ahead in the 34th minute when redshirt senior defender Shannon McCarthy sent a free kick into the box to fellow co-captain Gianna Dal Pozzo. The senior midfielder/defender headed it, but the ball clanged off the far post. Lachowecki then had her shot saved after the rebound.

That was the closest either team would come to scoring in the first half, as Lachowecki’s shot was the lone one on goal in the opening 45 minutes. Despite Syracuse taking five corner kicks, Miami limited the Orange to just one shot attempt before the intermission.

In the 64th minute, the Hurricanes had another great chance to go ahead. Senior defender Emily Auld passed a corner kick to McCarthy near the midfield circle. She sent it into the box and it was played to freshman forward Kristina Fisher, whose shot hit the crossbar and bounced away.

Miami then took the lead in the 72nd minute when McCarthy again connected with Dal Pozzo on a free kick and she headed it to Johnson, who sent a strong shot from close range past junior goalkeeper Courtney Brosnan.

The shot by Johnson, a junior, was the 16th of the match for the Hurricanes, who had conceded just one at that point.

“We’ve talked about players being in certain spaces on the field, especially in the attack,” Monroe said. “Ronnie did a wonderful job of committing herself to get into the space that we needed her to be in and she finished a wonderful shot.”

The Hurricanes doubled their lead in the 81st minute and it was again Dal Pozzo who supplied the pass that led to the goal, earning her first-career multi-assist outing. The Naperville, Ill., native played an outstanding long ball down the field to Lachowecki, who ran onto it, cut back to beat a defender and then slipped it past Brosnan to make the score 2-0.

The tally moved Lachowecki, a senior from Evansville, Ind., into a tie with Jennifer Sanchez for fifth place on the Hurricanes’ all-time list and made her one of six players in program history to record 20 goals.

“Gianna recognized that their back line was super high and she did a fantastic job. You see her hand up, you see her foot back, she knows she wants to get Gracie in,” Monroe said. “Gracie has a ton of speed, she’s so fit—individual, wonderful effort. She scored an amazing goal for us today when we needed it.”

Syracuse freshman midfielder Carolin Bader recorded the Orange’s lone shot on goal with five seconds left in the game, as Auld saved the ball off the line to preserve the shutout. Sunday was the third time in the last four matches Miami has conceded just one shot on goal.

This is the first time the Hurricanes, who won 2-0 against second-ranked Virginia Thursday night, have recorded back-to-back victories in ACC play since Oct. 6 and Oct. 10, 2014, when they topped third-ranked Notre Dame, 2-0, and Pittsburgh, 1-0.

Additionally, Miami has now won two of its first three ACC matches for the third time in program history, joining the 2007 and 2010 campaigns.

After a midweek bye, the Hurricanes will play their third consecutive conference home match Sunday at 2 p.m., when they take on Wake Forest at Cobb Stadium.