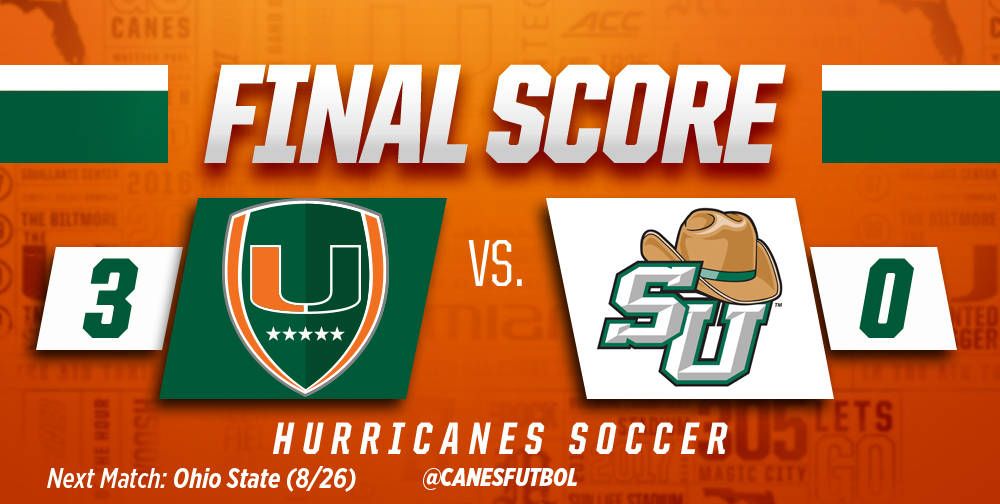 DeLAND, Fla. – The University of Miami soccer team recorded its second victory in as many matches this season with a 3-0 triumph at Stetson Sunday afternoon at the Athletic Training Center.

Freshman forward Kristina Fisher scored the first goal of the match for Miami (2-0-0) and assisted on the other two, which were recorded by junior forward/midfielder Grace Rapp and senior forward Gracie Lachowecki.

“It’s not always easy coming on the road and playing a Sunday one o’clock game with this heat and I’m really proud of the team for sticking to the game plan,” Miami head coach Mary-Frances Monroe said. “We had quite a few great opportunities on frame, could’ve gotten a few more goals, but I’m really proud of how their performance was today.”

Fisher, who had five points in her debut Friday, found the back of the net in the 16th minute. Junior forward Ronnie Johnson received a pass from senior midfielder/defender Gianna Dal Pozzo, spun and had her shot impressively blocked by Stetson (0-1-1) junior goalkeeper Kahri Smith.

Fisher, however, was there to tap the ball over the line and into the net for the opening tally. Dal Pozzo and Johnson both earned assists on the lone goal of the first half.

“Ronnie was in a good position to shoot and she ended up cutting it back and it got deflected a little bit and then Fish was in the right place to put it away for us,” Monroe said.

Redshirt sophomore goalkeeper Phallon Tullis-Joyce made two solid stops before the break, while sophomore Maisie Baker and redshirt senior Shannon McCarthy both had key plays from their central defensive positions to help maintain the shutout entering the intermission.

Miami doubled its lead in the 56th minute on a goal by Rapp. Lachowecki sent a cross to Fisher, who gently played the ball to Rapp and she fired it past Smith to make it 2-0.

“A big thing we’ve been talking about is committing numbers forward into the box and Grace Rapp definitely did that,” Monroe said. “She showed confidence in how she shot the ball today.”

The Hurricanes put the match out of reach with another tally in the 79th minute and it was Lachowecki, who led the team in shot attempts for the second straight outing, with the goal.

Freshman defender Madison Louk earned the first point of her career by sending a long ball to Fisher, who gave it off to Lachowecki and she sent it far post, out of Smith’s reach.

“We’ve been working on backs being the start of our attack and Madison did a great job of getting the ball back into the mix,” Monroe said. “We actually had several players read it really well and stay onside. We tripped over it a few times, but [Gracie then] was able to put it away.”

Tullis-Joyce, who has played 153 minutes this season without conceding a goal, finished the match with four saves and made several superb plays in net for Miami.

“I’m really proud of Phallon. She’s come a long way in the last year,” Monroe said. “She had a really great spring and really built her confidence. She’s just the kind of player who we need [in order for us] to be great in all aspects of the game. She’s really improved this year, and shows that she can come out on crosses, she can serve the ball well and she just seems to be playing with a lot of confidence.”

This is the second straight year the Hurricanes have road shutouts in consecutive matches. The last time Miami logged road shutouts by multiple goals in back-to-back matches was in September of 2008. Additionally, this is the first time since 2013 Miami has won its first two contests of the season.

Through four spring scrimmages, two fall exhibitions and two regular season matches, the Hurricanes have now outscored their opposition, 35-1, in 2016.

Miami will host No. 23 Ohio State in its home opener Friday at 8 p.m., in the first of six consecutive matches at Cobb Stadium.