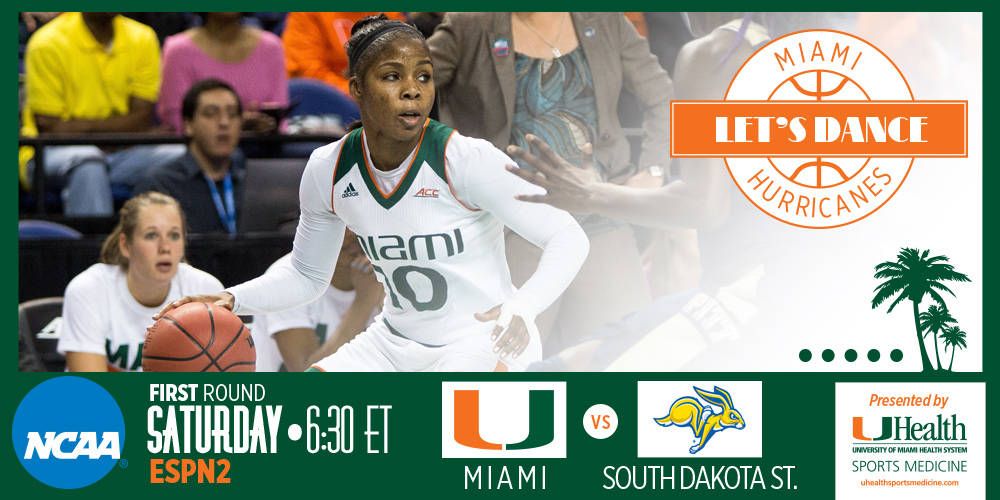 @CanesWBB Meets South Dakota St. in NCAA Round One

The Game
Miami, ranked No. 19 in both The Associated Press Poll and the USA TODAY Coaches Poll, will open the 2016 NCAA Tournament Saturday against South Dakota State at Maples Pavilion in Stanford, Calif. The fifth-seeded Hurricanes and 12th-seeded Jackrabbits will square off at 6:30 p.m. ET.

The Series
The Hurricanes and Jackrabbits have never met each other before. South Dakota State is the fifth team Miami will play this season it has not previously faced; the Hurricanes won the prior four games.

The Team
Eight Hurricanes are back from a team that reached the second round of the NCAA Tournament in 2014-15. That group includes a trio of starters who are now the team captains: junior guard Adrienne Motley, a two-time First Team All-ACC selection, junior guard Jessica Thomas and redshirt senior guard Michelle Woods.

The Coach
Katie Meier, in her 11th season in Coral Gables, Fla., has led Miami to great heights during her tenure. Since 2009-10, the Wheaton, Ill., native has directed the program to its greatest seven-year stretch ever, making the postseason in all seven season, with five NCAA Tournament appearances. This year, Meier has already guided the Hurricanes to their sixth 20-win campaign in the past seven seasons.

The Opponent
South Dakota State enters the NCAA Tournament at 26-6 overall and went 13-3 in Summit League play. The Jackrabbits beat South Dakota to win their seventh conference tournament title in the past eight years. Sophomore guard Macy Miller is the team’s leader in scoring and assists, at 15.3 and 2.8 per game, respectively. Junior guard/forward Kerri Young averages 10.6 points, while freshman guard Madison Guebert posts 10.4 points an outing and sophomore forward Ellie Thompson is tallying 10.2 points and 6.6 rebounds, second-most on the team, per game.

Last Time Out
The Hurricanes turned in a stellar effort against No. 2/3 Notre Dame in the semifinals of the ACC Tournament March 5 before falling 78-67 to the eventual conference champion. Thomas connected on five 3-pointers for the second game in a row and logged a co-game-high 17 points in the defeat. Woods added 13 points and Motley posted 10. ACC Player of the Year Brianna Turner, a sophomore forward, paced the Fighting Irish with 17 points and a game-high nine rebounds.

Up Next
If Miami defeats the Jackrabbits, it will face either fourth-seeded Stanford or 13th-seeded San Francisco Monday at a time to be determined in the second round of the NCAA Tournament.