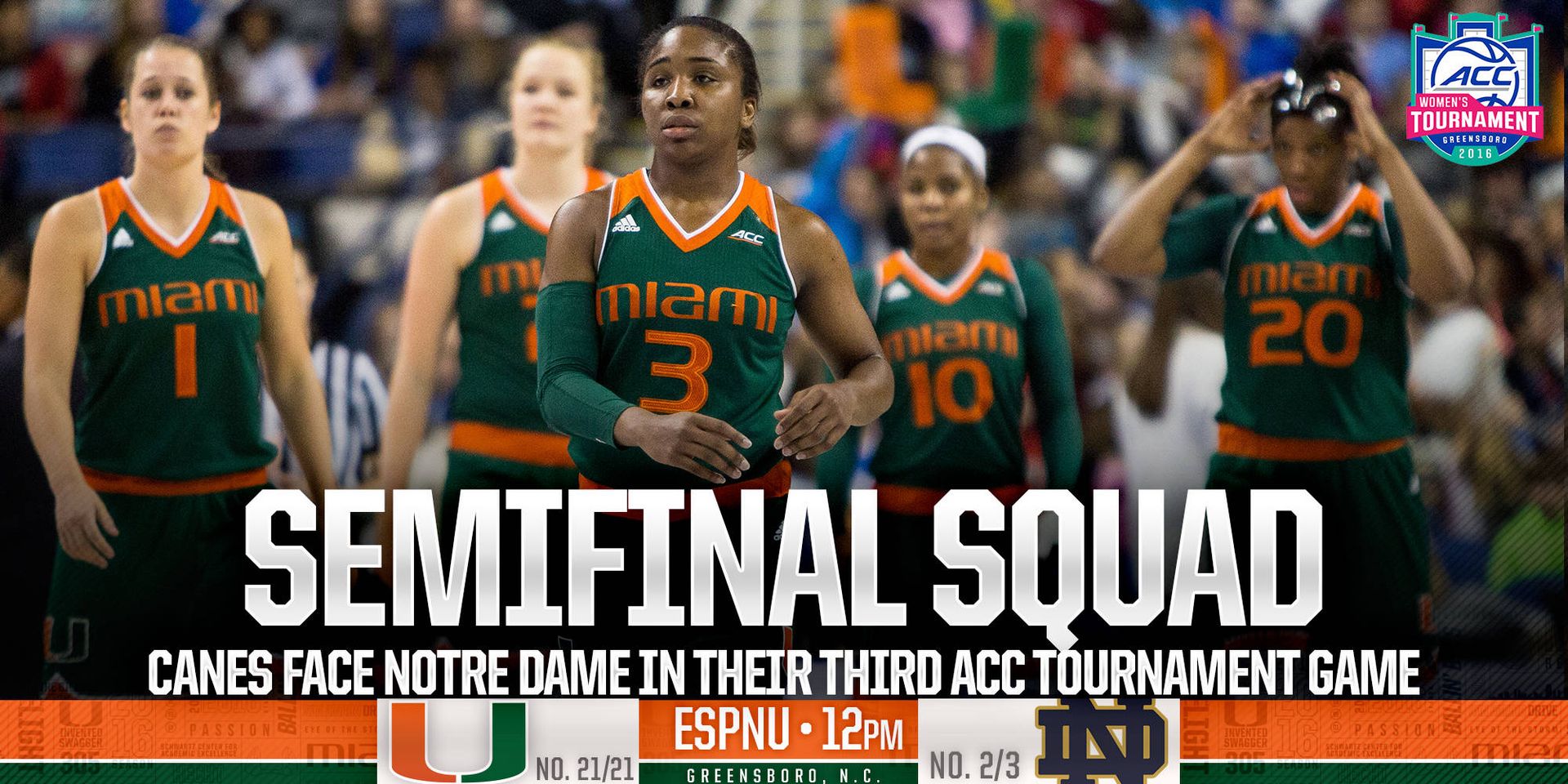 The Game
The Hurricanes, ranked No. 21 in both The Associated Press Poll and the USA TODAY Coaches Poll, are set to face No. 2/3 Notre Dame Saturday in their second ACC Tournament semifinal appearance. Miami, the fifth seed in the field, and the Fighting Irish, seeded first, will square off at 12 p.m. at the Greensboro Coliseum in Greensboro, N.C.

The Series
Notre Dame holds a 16-4 advantage in the all-time series against Miami and won the lone ACC Tournament matchup, picking up a 77-61 victory last season on March 6, 2015. In the regular season meeting, the Fighting Irish won 90-69 at home on Feb. 14, 2016. The Hurricanes are the only team to defeat Notre Dame in ACC regular season or ACC Tournament play in the Fighting Irish’s three seasons in the conference. Miami’s 78-63 home victory on Jan. 8, 2015, is the lone blemish on Notre Dame’s 54-1 record.

The Opponent
Notre Dame won the ACC regular season title with a perfect 16-0 record and is 29-1 overall in 2015-16. Sophomore forward Brianna Turner, the ACC Defensive Player of the Year, leads the team in a variety of categories, including scoring (14.1), rebounding (7.0), blocks (3.2) and field goal percentage (61.0). Graduate student guard Madison Cable (13.5), freshman guard Arike Ogunbowale (12.2) and freshman guard Marina Mabrey (11.0) all average in double figures, too. Turner, Cable and junior guard Lindsay Allen were all Blue Ribbon Panel First Team All-ACC selections. Notre Dame, led by ACC Coach of the Year Muffet McGraw, has made the Final Four each of the past five seasons.

Last Time Out
The Hurricanes took down No. 14/10 Florida State, the fourth seed in the ACC Tournament, in the quarterfinals Friday, earning a dominant 74-56 victory. Thomas scored a season-high 21 points and made a career-high five 3-pointers. Hof scored 15 points, while Hayes and Motley each added 13 for the Hurricanes. Miami outscored the Seminoles 37-19 in the second half, including 22-11 in the fourth period. The Hurricanes had a 34-22 edge in points in the paint and forced the Seminoles into 25 turnovers. The win was Miami’s first over a top-15 opponent since toppling Notre Dame last season.

Up Next
If the Hurricanes defeat the Fighting Irish, they will play in the ACC Tournament championship game Sunday at 12:30 p.m. on ESPN.