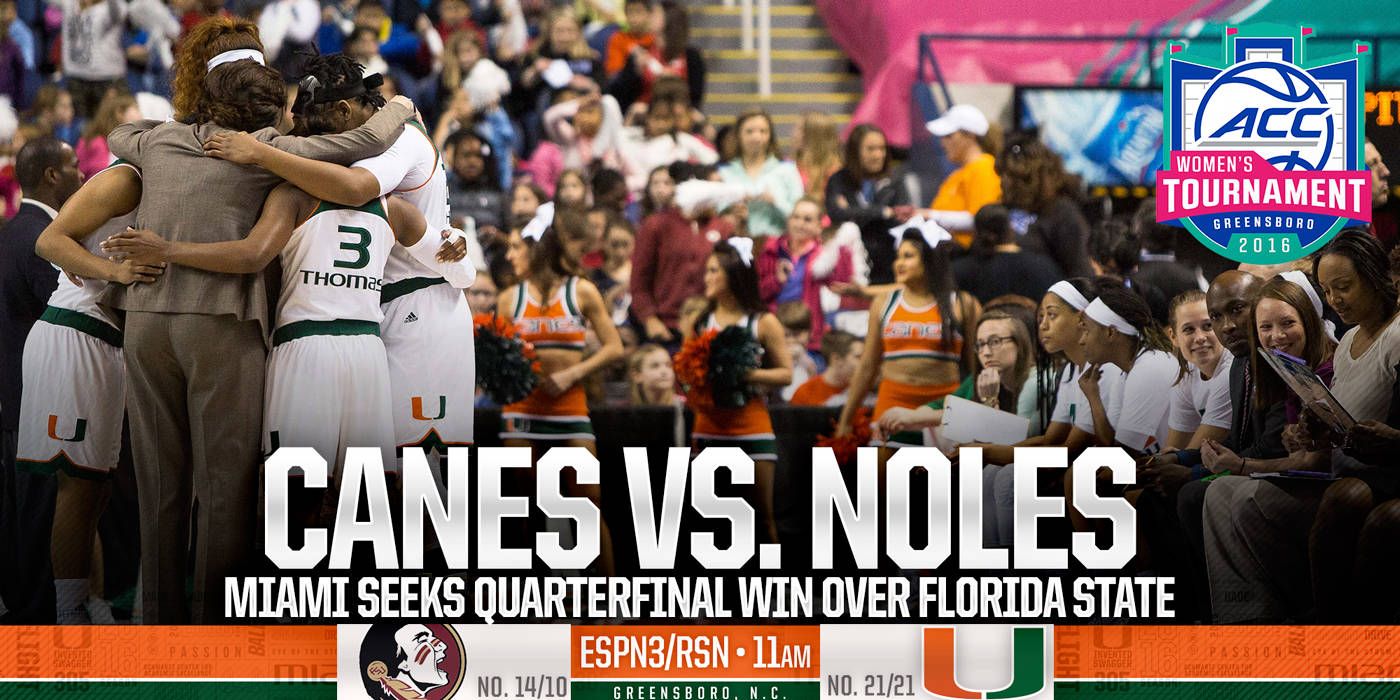 The Game
Miami, ranked No. 21 in both The Associated Press Poll and the USA TODAY Coaches Poll, will face No. 14/10 Florida State Friday in the ACC Tournament quarterfinals. The Hurricanes, seeded fifth, and the Seminoles, seeded fourth, are set to meet at 11 a.m. at the Greensboro Coliseum in Greensboro, N.C.

The Series
The Seminoles hold a 39-12 edge in the all-time series against Miami and have won both prior ACC Tournament matchups. Florida State won both regular season meetings between the two teams, most recently picking up a 70-67 home victory last Sunday. Miami led for over 31 minutes of action in the contest before falling by three.

The Opponent
The Seminoles finished the regular season 23-6 and tied for third in the ACC at 13-3. Sophomore forward Shakayla Thomas, their leading scorer at 17.3 points per game, won her second-straight ACC Sixth Player of the Year award and was named First Team All-ACC. Senior center Adut Bulgak, who averages 12.9 points and a team-best 7.8 rebounds per game, was a Second Team All-ACC honoree. Junior guard Leticia Romero also averages double digits, posting 11.1 points an outing.

Last Time Out
Miami opened ACC Tournament play with a 77-55 victory over 12th-seeded Pittsburgh Thursday. The Hurricanes shot a season-best 60.0 percent (33-of-55) from the field. Leading the charge was Hayes, who was a perfect 9-of-9 and finished with 18 points to go along with a team-high seven rebounds. Motley led all scorers with 19 points and both Hof and Woods chipped in with 11 points. Miami had a 40-18 edge in points in the paint and a 17-2 advantage in bench points.

Up Next
If the Miami tops the Seminoles, it will take on either No. 2/3 Notre Dame, the top seed in the field, or eighth-seeded Duke Saturday at 12 p.m. on ESPNU in the ACC Tournament semifinals.