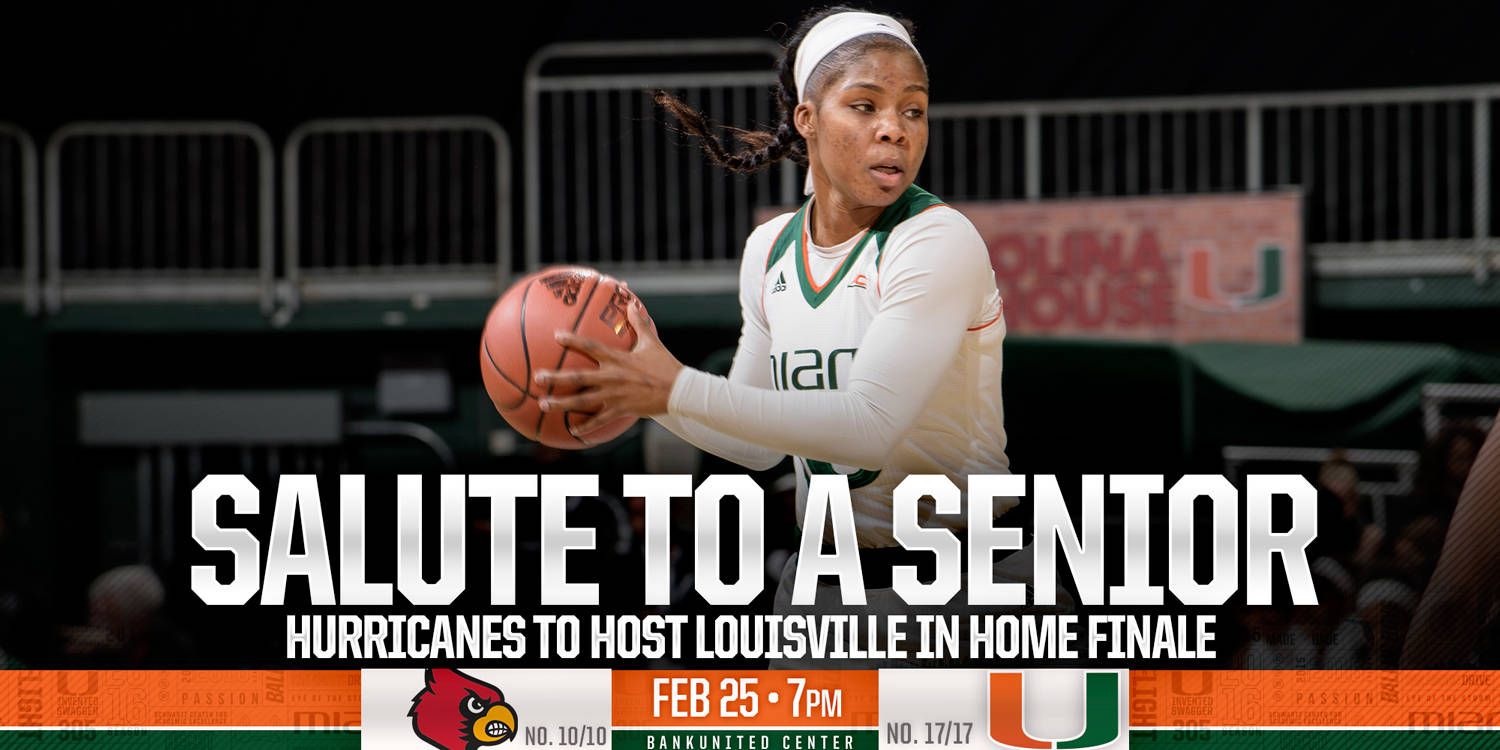 The Game
Miami, ranked No. 17 in both The Associated Press Poll and the USA TODAY Coaches Poll, is set to conclude its home slate Thursday night. The Hurricanes take on No. 10/10 Louisville at 7 p.m. at the BankUnited Center in a game that will also serve as redshirt senior guard Michelle Woods’ senior night. Tickets are $5, with youth 12-and-under admitted free of charge.

The Opponent
The Cardinals enter the game at 22-6 (13-1 ACC) and have won 19 of their past 20 contests. Sophomore forward Myisha Hines-Allen leads the team in scoring (16.8), rebounding (7.7), blocks (0.7) and field goal percentage (53.7%). Sophomore forward Mariya Moore (15.0), redshirt junior guard Briahanna Jackson (10.9) and freshman guard Asia Durr (10.9) all average double figures, too. Louisville was picked third in the ACC preseason poll after posting a 27-7 (12-4 ACC) mark last year en route to an appearance in the second round of the NCAA Tournament.

Last Time Out
The Hurricanes earned their first overtime victory in over four years when they topped Virginia Tech, 67-56, at the BUC Sunday. Hof led Miami with 15 points, a career high in ACC play, and set new season bests by any Hurricane with nine made free throws and 11 attempts. Motley added 12 points in the victory for Miami, which had a 21-9 edge in points off turnovers and a 12-4 advantage in second chance points.

Up Next
Miami wraps up the 2015-16 regular season when it takes on No. 12/12 Florida State Sunday in Tallahassee, Fla. The game is set for 3 p.m. at the Donald L. Tucker Civic Center and will be televised on ESPN2.

Woods will be honored on the BUC court prior to the game, as a part of her senior night festivities. The team’s head manager, Chiara Morello, will also be recognized.

The Division of Student Affairs is sponsoring a free barbecue dinner for students at halftime of the game in the Hurricane 100 Room.

Elementary and middle school students from Pinecrest Preparatory Academy will be performing the national anthem. They will also be singing at halftime and at two of the in-game media timeouts.

Additionally, there will be a chalk talk for season ticket holders in the Hurricane 100 Room prior to the game. The talk will begin at 5:45 p.m. and doors open at 5:30 p.m.