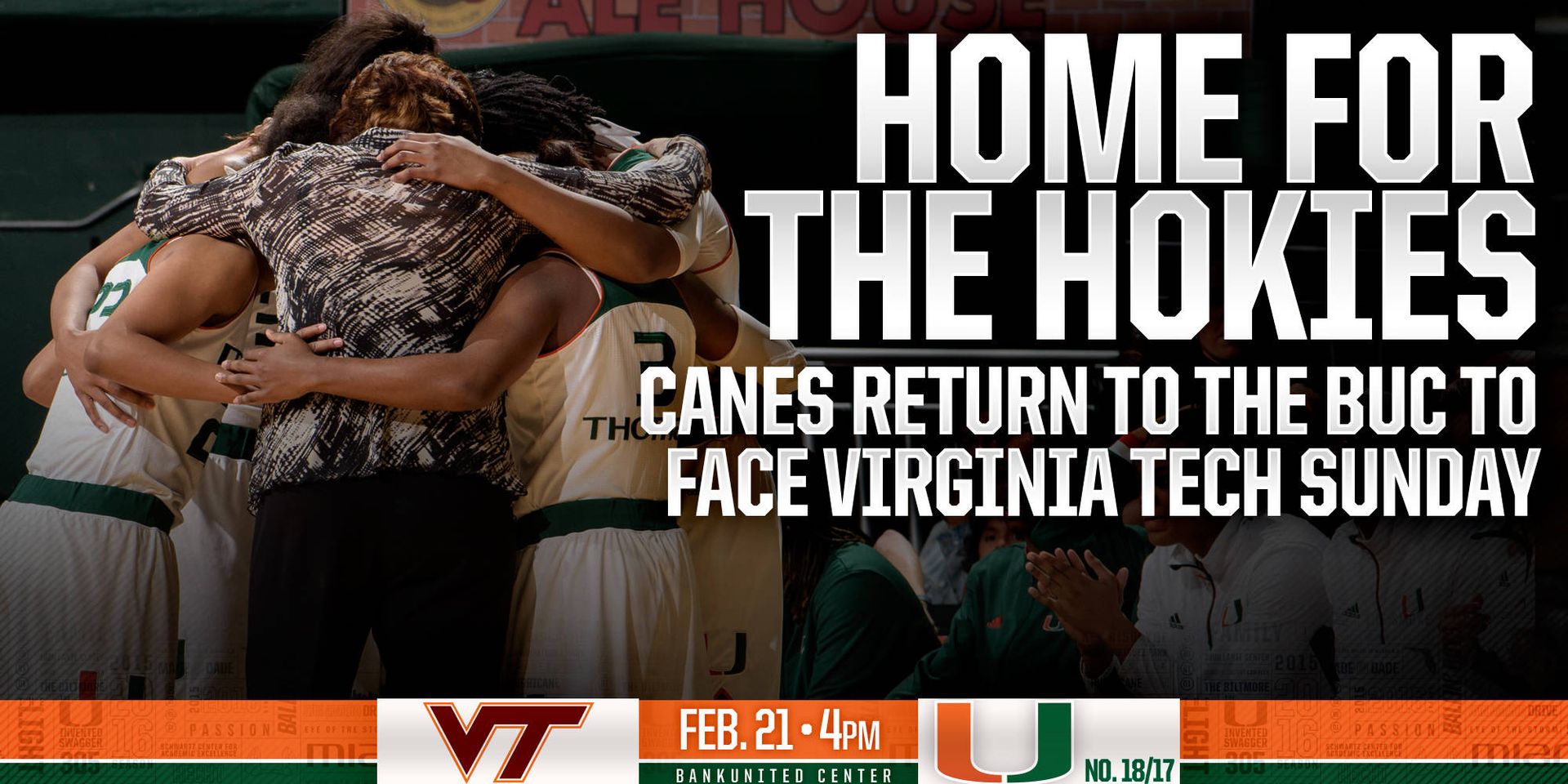 The Game
The Hurricanes, ranked No. 18 in The Associated Press Poll and No. 17 the USA TODAY Coaches Poll, will play their first home game in two weeks Sunday against Virginia Tech. Miami is set to square off against the Hokies at 4 p.m. at the BankUnited Center in Coral Gables, Fla., in its Play 4 Kay game.

The Series
Miami holds a 15-6 edge in the all-time series against the Hokies after winning each of the past nine meetings. The Hurricanes picked up a 57-45 road victory at Virginia Tech earlier this season on Jan. 28.

The Opponent
The Hokies are 15-11 (3-10 ACC) on the season after posting a 12-1 mark in nonconference competition. Two Virginia Tech players average double figures in scoring, with senior forward Hannah Young at 10.3 points per game and junior forward Sidney Cook at 10.0. Freshman guard Chanette Hicks’ 4.3 assists per game place her seventh in the ACC. The Hokies boast the top scoring defense in the conference, allowing just 52.7 points per game.

Last Time Out
Miami dropped just its second true road game of the season Feb. 14 in South Bend, Ind., falling 90-69 to third-ranked Notre Dame. The Hurricanes forced the Fighting Irish into 23 turnovers in the defeat and tallied seven blocked shots, their second-most of the season. Thomas and Hof led the Hurricanes with 12 points apiece, while Prather set or tied career highs in points (six), blocks (three), steals (three) and field goals made (three). Greene scored eight points in her return to the court after missing the previous 14 contests due to injury.

Up Next
The Hurricanes will complete their lone two-game ACC homestand Thursday, Feb. 25 when they take on No. 11/11 Louisville at 7 p.m. at the BankUnited Center. The game will serve as senior night for Woods.

Promotions
As is the case for all women’s basketball games at the BankUnited Center this season, youth 12-and-under will receive free admission. Team posters, schedule cards and new rules infographics will be available at the marketing table by the main entrance. The first 300 fans who arrive and stop by the table will receive a free pink rally towel.

Former Miami star and current assistant coach Octavia Blue will have her jersey retired prior to the game, becoming the fourth player in program history to receive the honor.

The Heroines Choir, a group of breast cancer survivors, will be performing the national anthem before the game.

The second annual Dessert Wars will take place prior to the game from 1 p.m. to 4 p.m. in the Multipurpose Room across from the BUC. Dessert Wars costs just $15 and the price includes a ticket to the game. Additional information can be found at DessertWarsMiami.com.

Also taking place before tipoff is the UCheer and UDance Clinic, which will be held from 1:30 p.m. to 3:30 p.m. at the Knights Sports Complex. The event, which is open to participants from kindergarten through eighth grade, costs $20 and includes a ticket to the game. Pre-registration is available HERE until 5 p.m. Friday and then walk-ups can register for $25 between 1 p.m. and 1:30 p.m. Sunday. For more information, contact Leah Gross at leahgross@miami.edu.

Fans in attendance can show their ticket at Carolina Ale House within 24 hours of the game to receive six free wings.

In advance of Woods’ Senior Night, fans can record a message for the Naples, Fla., native to be played to her. A video shoot will be set up outside Section 113 from 3:15 p.m. to 4 p.m.

Additionally, there will be a chalk talk for season ticket holders in the Hurricane 100 Room prior to the game. The talk will begin at 2:45 p.m. and doors open at 2:30 p.m.