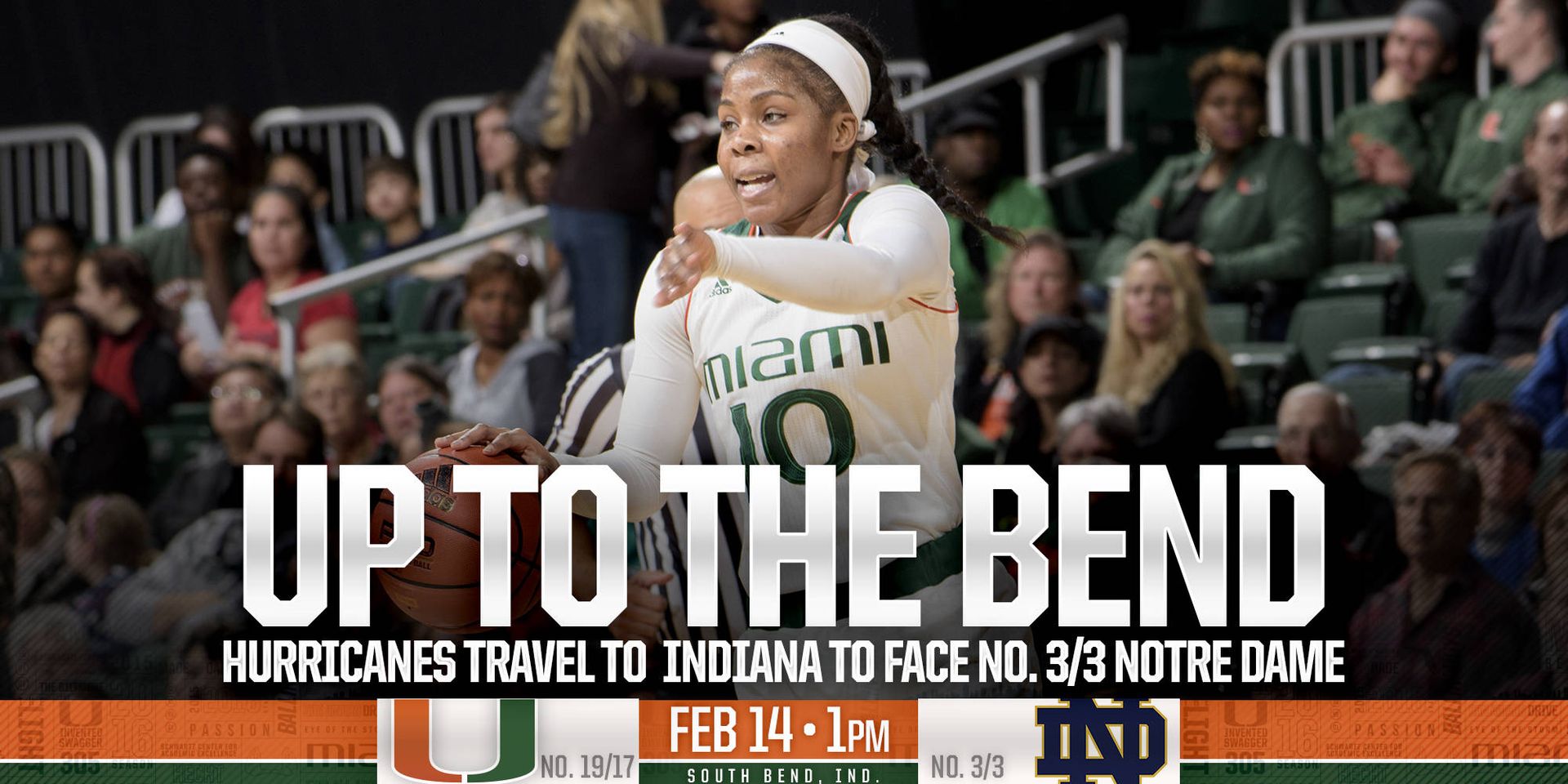 The Game
Miami, ranked No. 19 in The Associated Press Poll and No. 17 the USA TODAY Coaches Poll, plays its second-straight ACC road game Sunday afternoon at third-ranked Notre Dame. The Hurricanes and Fighting Irish are set to square off at 1 p.m. at Purcell Pavilion in South Bend, Ind.

The Series
Notre Dame has a 15-4 edge in the all-time series against Miami and won the most recent meeting 77-61 at the ACC Tournament in Greensboro, N.C., on March 6, 2015. The Hurricanes also downed Notre Dame last year in regular season play, winning 78-63 on Jan. 8, 2015, giving the Fighting Irish their lone conference loss in their two-plus seasons in the ACC.

The Opponent
The Fighting Irish are 23-1 (11-0 ACC) and have been ranked third nationally the entire season. Notre Dame features four players averaging at least 11 points per game, with graduate student guard Madison Cable and sophomore forward Brianna Turner leading the way at 13.9 each. Freshman guard Arike Ogunbowale (11.5 ppg) and freshman guard Marina Mabrey (11.3 ppg) are the others. The lone undefeated team in ACC play, Notre Dame was picked first in the conference’s preseason poll and Turner was the ACC Preseason Player of the Year. The Fighting Irish went 36-3 (15-1 ACC) last season, advancing to the NCAA Championship for the second year in a row.

Last Time Out
The Hurricanes moved to 8-1 on the season in true road games with an exciting 58-55 victory over Georgia Tech Thursday night at Hank McCamish Pavilion in Atlanta. Hayes and Davenport, both natives of the Peach State, combined for 28 points, with Hayes’ 16 pacing Miami in the victory. Motley added 13 and Thomas chipped in with 10, as four Hurricanes logged double figures. The Hurricanes shot 22-of-49 (44.9 percent) from the field, while limiting Georgia Tech to a 19-of-63 (30.2 percent) clip.

Up Next
After a midweek bye, Miami will open its lone two-game ACC homestand Sunday, Feb. 21 against Virginia Tech. The game is scheduled for 4 p.m. at the BankUnited Center in Coral Gables, Fla.