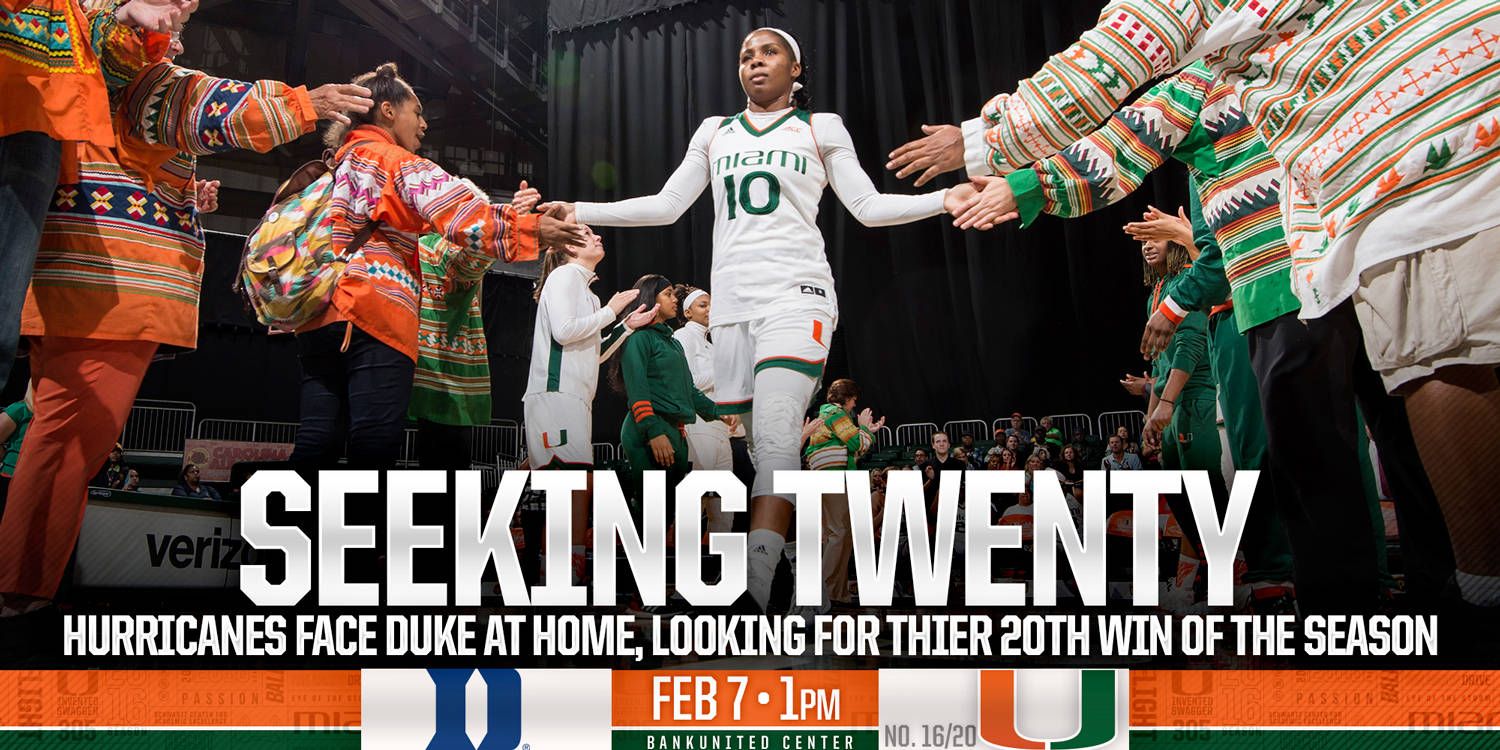 @CanesWBB Ready to Host Duke at the BUC

The Game
Miami, ranked No. 16 in The Associated Press Poll and No. 20 the USA TODAY Coaches Poll, will host Duke Sunday afternoon. The contest is scheduled for 1 p.m. at the BankUnited Center. Tickets are $5, with youth 12-and-under admitted free of charge.

A two-time graduate of Duke University, Meier is one of the greatest players in program history. She was inducted into the Duke Hall of Honor in 2002 and named the Blue Devils’ inaugural ACC Legend in 2006.

The Opponent
The Blue Devils are 17-7 (6-4) on the season and are led by the play of sophomore forward/guard Azurá Stevens, who leads the ACC in rebounds (9.4) and blocked shots (2.2) per game, as well as double-doubles (12). Stevens also ranks second in the conference in scoring at 19.1 points per game. Redshirt sophomore Rebecca Greenwell is second on the Blue Devils in scoring, averaging 15.0 points an outing.

Last Time Out
The Hurricanes moved to 7-1 on the road this season with a 67-62 victory at Boston College Thursday night at Conte Forum in Chestnut Hill, Mass. Thomas set a career high with eight made free throws, needing just nine attempts to reach that mark. Miami as a whole went 18-of-22 (81.8 percent) at the stripe. Thomas’ 14 points led all Hurricanes, while Motley posted 13, Hayes added 11 and Davenport chipped in with eight to go along with a game-high and season-high-tying nine rebounds.

Up Next
Miami begins its lone two-game ACC road swing Thursday, Feb. 11 at Georgia Tech. The Hurricanes and Yellow Jackets will square off at 7 p.m. at Hank McCamish Pavilion in Atlanta.

Promotions
As is the case for all women’s basketball games at the BankUnited Center this season, youth 12-and-under will receive free admission. Team posters, schedule cards and new rules infographics will be available at the marketing table by the main entrance. There will be performances by Beat Street throughout the game.

During the game, Miami’s 2016 ACC Women’s Basketball Legend honoree, Sylvia Wilson, will be recognized. A posthumous recipient of the accolade, Wilson will be represented by family and friends.

In addition, there will be a Super Bowl tailgate at halftime of the game in the Hurricane 100 Room. Tickets to the tailgate are just $5 and can be purchased at halftime or fans can buy a $10 game ticket that includes entrance.