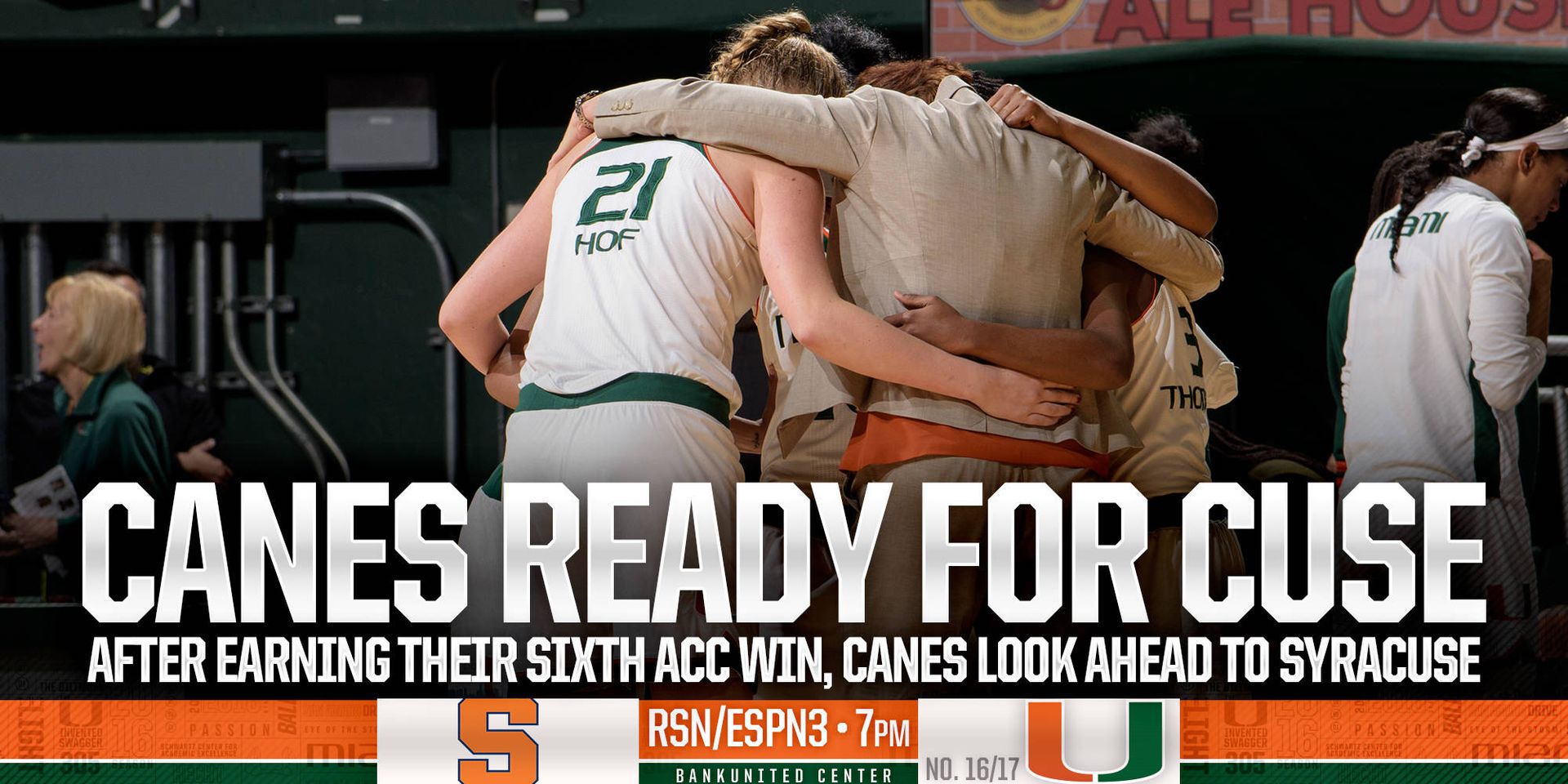 @CanesWBB to Host Syracuse at the BUC

The Game
Miami, ranked No. 16 in The Associated Press Poll and No. 17 the USA TODAY Coaches Poll, is set to meet Syracuse Monday at 7 p.m. at the BankUnited Center in Coral Gables. Tickets are $5, with youth 12-and-under admitted free of charge.

The Opponent
The Orange is 15-6 (5-3 ACC) on the season with five of its six losses against nationally-ranked teams. Junior guard Alexis Peterson leads a trio of Syracuse players averaging double-digit points per game at 14.2 points an outing, plus a team-high 5.5 assists. Senior guard Brianna Butler posts 13.4 points per game and junior center Briana Day adds 10.4 points to go along with a team-high 7.7 rebounds.

Last Time Out
The Hurricanes earned their sixth road victory in seven tries this season with a 57-45 win at Virginia Tech. Miami topped the Hokies Thursday at Cassell Coliseum in Blacksburg, Va., behind a game-high 17 points from Motley, playing in her home state. Thomas added 14 points and a season-high seven rebounds in the victory. Miami had a 44-35 advantage in rebounding and outscored the Hokies 17-5 down the stretch after the game was even at 40.

Up Next
Miami hits the road to take on Boston College at Conte Forum in Chestnut Hill, Mass., Thursday at 7 p.m.

Promotions
As is the case for all women’s basketball games at the BankUnited Center this season, youth 12-and-under will receive free admission. Team posters, schedule cards and new rules infographics will be available at the marketing table by the main entrance. There will be a halftime performance by UJHOOM, a competitive Bollywood-Fusion dance team at Miami, too.

In addition, there will be a Female Career in Sports Panel before the game in the Hurricane 100 Room. The event will begin at 6:10 p.m., with check-in opening at 5:45 p.m. Entry is free for University of Miami students with their Cane Cards and is $10 for the public.