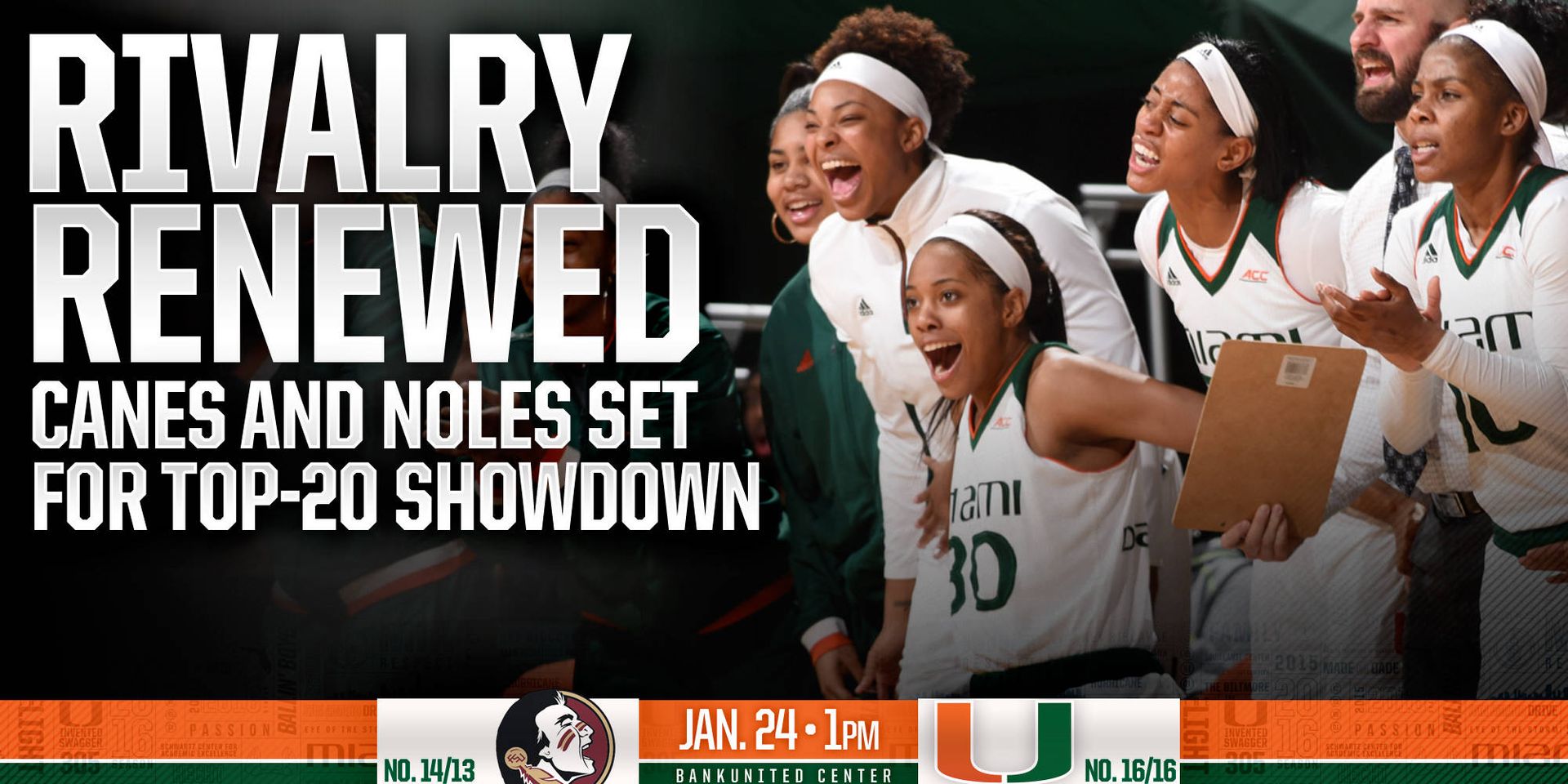 The Game
Miami, ranked No. 16 in both The Associated Press Poll and the USA TODAY Coaches Poll, hosts No. 14/13 Florida State Sunday at 1 p.m. It is the first time the Hurricanes and Seminoles have met in Coral Gables with both nationally ranked since Feb. 24, 2011. Tickets are $5, with youth 12-and-under admitted free of charge.

The Series
The Seminoles hold a 37-12 lead in the all-time series against Miami. Five of the Hurricanes’ victories have come since 2010. In the most recent matchup, Florida State earned a 69-55 road win on March 1, 2015.

Meier has guided Miami to 58 victories in ACC play since the start of the 2010-11 season, the second-most of any team in the conference. The 2010-11 AP National Coach of the Year  is in her 15th season as a head coach, spending the first four at Charlotte, and owns a career record of 276-181, including 200-136 at Miami. She earned the 200th victory of her Hurricane tenure in Miami’s most recent outing a 76-61 road win at North Carolina Jan. 14.

The Opponent
The Seminoles are 15-4 and tied with Miami for third place in the ACC at 5-1. Florida State has three players averaging over 10 points per game, with sophomore Shakayla Thomas’ 17.4 pacing the group. Senior center Adut Bulgak is second at 14.4 points an outing and also ranks first on the team and third in the ACC in rebounding at 8.1 per game. Junior guard Leticia Romero posts 10.9 points per game and is sixth in the ACC in 3-point field goal percentage at 44.4 percent.  After posting a 32-5 (14-2 ACC) record last season en route to an Elite Eight appearance, the Seminoles were tabbed to finish second in the ACC preseason poll this year.

Last Time Out
The Hurricanes handed North Carolina its largest home loss in 13 months with a 76-61 win at Carmichael Arena in Chapel Hill, N.C., Jan. 14. Motley led all scorers with 20 points for Miami, which trailed for just one minute and 37 seconds of action. Cornelius added 13 points, while posting career highs in both rebounds (eight) and assists (seven). Thomas also had 13 points and Hof chipped in with 10, too. The Hurricanes led by as much as 19 in the contest and finished the game with a 24-0 edge in bench points, as well as an 11-2 lead in second chance points.

Up Next
Miami hits the road for a trip to face Virginia Tech at Cassell Coliseum in Blacksburg, Va., Thursday night at 7 p.m.

All fans in attendance at the game, which is a part of ACC Sportsmanship Week, will receive light-up bracelets, while students at the BUC will get free pizza and drinks from the Big Cheese. Students who are there for the full game will receive priority access vouchers for the men’s basketball game against Duke Monday, Jan. 25. Four free tickets and a parking pass to the men’s game against Duke, courtesy of Coca -Cola, will also be wrapped into a shirt that is shot into the crowd from the Coke Zero t-shirt cannon.

Additionally, Sunday is Sebastian the Ibis’ birthday party from pregame through halftime and registration for children 12-and-under is available HERE. It is also Employee Day at the BUC, meaning University of Miami employees can purchase tickets for $1. Prior to the game is the Celebration of Women’s Athletics, which is a part of President Julio Frenk’s inauguration week, and honorees will be recognized during the game.

Lastly, preregistered Girl Scouts will be able to participate in a postgame clinic with the Miami women’s basketball team.