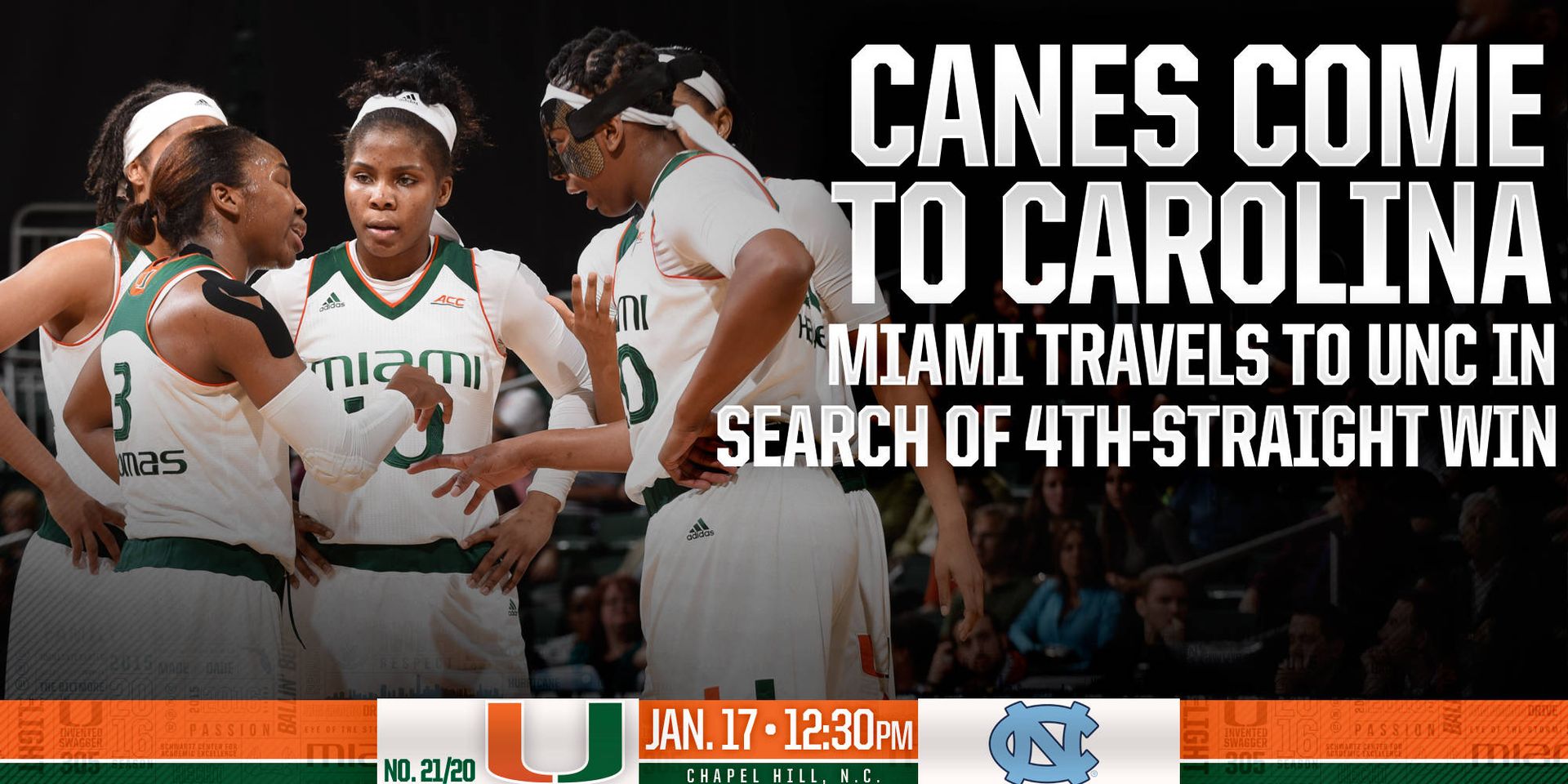 The Game
The Hurricanes, ranked No. 21 in The Associated Press Poll and No. 20 in the USA TODAY Coaches Poll, hit the road to face North Carolina Sunday afternoon. The game is set for 12:30 p.m. at Carmichael Arena in Chapel Hill, N.C.

The Series
The Tar Heels have a 13-6 lead in the all-time series against Miami, but each team has won four of the past eight meetings. The past three contests have been decided by a total of six points and the Hurricanes topped then-sixth-ranked North Carolina, 83-80, in their last visit to Chapel Hill on Feb. 2, 2014. In the most recent meeting, the Tar Heels picked up a 66-65 win at Miami on Feb. 22, 2015.

Meier has guided Miami to 57 victories in ACC play since the start of the 2010-11 season, the second-most of any team in the conference. The 2010-11 AP National Coach of the Year  is in her 15th season as a head coach, spending the first four at Charlotte, and owns a career record of 275-181, including 199-136 at Miami. She is one victory away from 200 in her tenure coaching the Hurricanes.

The Opponent
The Tar Heels enter the game at 12-7 (2-2 ACC) on the season, dropping their last two games after winning six in a row. Three North Carolina players average greater than a dozen points per game, with sophomore guard Jamie Cherry pacing the group at 14.7 per outing to go along with a team-high 4.1 per game. Freshman guards Destinee Walker and Stephanie Watts average 14.6 and 12.8 points, respectively. Four players average over a half dozen rebounds per game for the Tar Heels, who were tabbed seventh in the ACC preseason poll and ranked No. 22/20 to open the year. North Carolina went 23-7 (10-6 ACC) last season and advanced to the Sweet 16 of the NCAA Tournament.

Last Time Out
Miami trailed for a total of 53 seconds en route to a 71-60 victory over Wake Forest Thursday night at the BankUnited Center in Coral Gables, Fla. Hayes posted a game-high and career-high-tying 22 points on 8-of-10 shooting from the field and 6-of-7 at the free throw line, while also leading the team with six rebounds and matching her career best with three steals. Motley added 18 points and Thomas chipped in a dozen points to go along with a co-game-high five assists. The Hurricanes forced 24 turnovers and held the Demon Deacons to 2-of-14 shooting (14.3 percent) from 3-point range in the victory.

Up Next
The Hurricanes have a midweek bye after playing the Tar Heels and then return to action Sunday, Jan. 24 at 1 p.m. at the BankUnited Center against No. 16/14 Florida State.