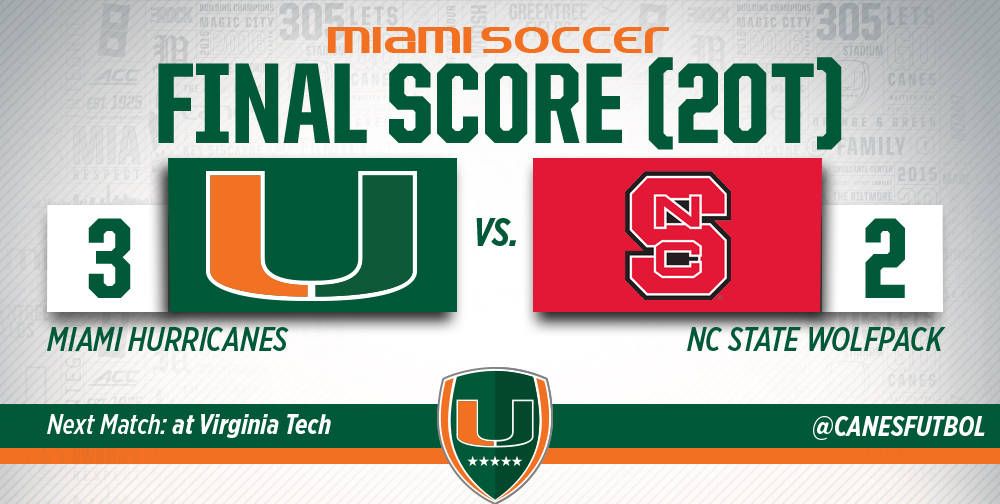 CORAL GABLES, Fla. – Gracie Lachowecki has done it again. For the second time in the last three matches, the junior forward scored a golden goal in double overtime to send the University of Miami (5-8-0, 2-4-0 ACC) soccer team to victory Sunday afternoon.

Lachowecki’s 109th minute tally gave her the first hat trick of her career and clinched a 3-2 comeback win over NC State after the Hurricanes trailed 2-0 through 50 minutes at Cobb Stadium.

The Wolfpack took a 2-0 edge before halftime and again Stengel was involved. The redshirt sophomore forward played the ball to junior forward Rachel Cox, who was one-on-one with Perez and beat her high to put NC State ahead by a pair in the 30th minute.

“We talk about being plugged in for 90 minutes, but for the first 45 minutes, the entire half, we were not plugged in. We weren’t ready to play,” Monroe said. “[Then, at] halftime, we talked about it. [There was] nothing tactical that we needed to change. We just needed to have more intensity, play with heart and want to work hard, and that’s what they did.”

They most certainly did just that, dominating the match offensively the rest of the way. The Hurricanes outshot the Wolfpack 24-3 after the intermission.

Miami cut the deficit in half just six minutes into the second frame. Senior forward Ava Ambrose sent a ball across the box and senior midfielder/defender Natalie Moik got it to Lachowecki, who tapped it into an open net in the 51st minute.

Just minutes after getting on the board, the Hurricanes pulled level. A blocked shot by Jasmine Paterson wound up at the feet of fellow senior forward Amy Schmidt and she deflected it along to Lachowecki, who slipped it by NC State freshman goalkeeper Sydney Wootten for a 59th minute equalizer.

Despite Miami’s continued forceful attack, it could not get on the board the rest of regulation, or in the first overtime. With just over a minute remaining the second session of extra time, the match still seemed destined to end in a tie. Lachowecki, though, had other ideas.

Freshman midfielder/fielder Niccola Venezia got control of the ball on NC State’s side of the field, played it along to Moik, who sent a one-time ball to Lachowecki, sprinting down the left side of the box. She got just enough of her foot on the ball that it dribbled past the line, giving Miami the win.

“She just works so hard individually with the coaching staff that it shows on the field when she gets out here,” Monroe said of Lachowecki. “We’ve been working on doing a lot of things in front of the net and I think that really has benefitted her, and the kid never stops trying . . . She’s just resilient in the box. I’m proud of her.”

The Hurricanes finished the match with a 31-10 edge in shot attempts, a 13-3 advantage in shots on goal and a 10-2 lead in corner kicks. Venezia recorded the first point of her career for Miami, while Wooten logged a career-high 10 saves for the Wolfpack in the defeat.

This was the second-consecutive year a Hurricane recorded a hat trick against NC State, as Natalie Moik did so in the team’s 3-1 win in Raleigh, N.C. last year. Miami is unbeaten in its last nine matches against NC State, with a 7-0-2 record dating back to 2007.

To stay up-to-date with the latest news on the University of Miami soccer team, follow @CanesFutbol.