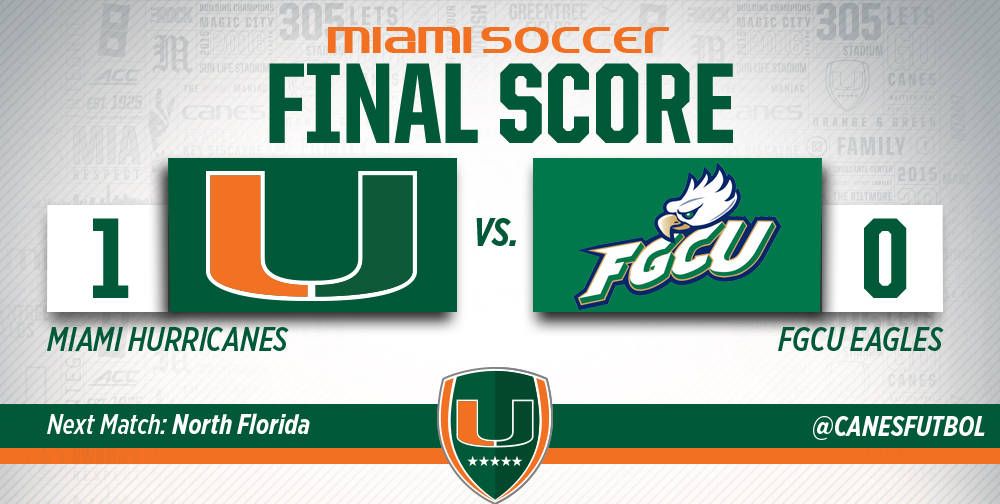 Emily Auld scored her first goal of the season on a shot from close range in the 57th minute at FGCU Soccer Complex to give the Hurricanes a lead they would not relinquish.

“Very happy we got a win on the road against a very strong team in FGCU,” Miami head coach Mary-Frances Monroe said. “We will continue to work hard to improve as we move forward in the season.”

The first half of the match was rather quiet, with limited scoring opportunities both ways. Miami (2-4-0) redshirt freshman goalkeeper Phallon Tullis-Joyce did make a few stellar plays for the Hurricanes to help keep the Eagles off the board before the break.

Freshman forward Jamie Brunworth provided a nice boost off the bench for Miami down the stretch of the first half and was involved in a trio of quality chances for the Hurricanes. Nonetheless, like FGCU (3-3-1), Miami was unable to break through and the match went to halftime scoreless.

It did not take long after the intermission for Miami to open the scoring. Freshman midfielder Ainsly Wolfinbarger found senior forward Amy Schmidt, who played the ball to Auld and the junior midfielder drilled it high into the back of the net.

The assists were the third of the season for both Wolfinbarger and Schmidt, the former of whom has done so in three-consecutive matches.

“The attack started with Ainsly wide, as she beat two players on the dribble and then sent a service into Amy, who had great awareness in tight space to lay it back to Emily,” Monroe said. “Emily took a smart touch around the defender and finished it upper 90.”

The Eagles, who went 17-4-0 last year and earned an NCAA Championship berth, seemed to have equalized in the 88th minute. However, the linesman ruled that an FGCU player was offside and the Hurricanes maintained their advantage.

Freshman Maisie Baker, junior Gianna Dal Pozzo and redshirt junior Shannon McCarthy all played the full match on the back line to help Miami seal the shutout. Additionally, Tullis-Joyce also played all 90 minutes in a clean sheet win for the second match in a row.

The Hurricanes have now recorded consecutive shutout victories for the first time since Sept. 2 (1-0 vs. Jacksonville) and Sept. 5 (2-0 vs. Stetson) of 2014.

The Hurricanes will be back in action on their home field Sunday afternoon when they host North Florida (1-5-0) at 1:00 p.m. at Cobb Stadium in Coral Gables, Fla.