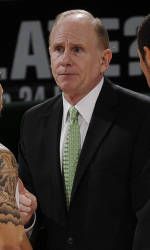 The Game
Miami closes out the 2011-12 regular season on Saturday when the Canes face Boston College at 2:30 p.m. at the BankUnited Center. UM will honor seniors Malcolm Grant, DeQuan Jones and Ryan Quigtar before tipoff.

The Broadcasts
Catch the game on Raycom with Rich Waltz and Dave Odom making the call. The game will also be carried live by 560 WQAM Radio with Joe Zagacki (play-by-play) and Josh Darrow (analyst), 90.5 WVUM and 106.3 CIMA.

The Coach
Head coach Jim Larranaga is in his 28th season as a head coach and first at Miami. He has a 486-345 overall record and holds a 459-319 record in D-I games. Coach L was also the head coach of D-II American International (27-26) for two years.