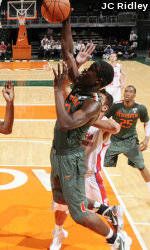 CORAL GABLES, FLA. – The University of Miami men’s basketball team returns home to the BankUnited Center to play host to North Carolina Central in the third meeting between the programs on Fri., Nov. 19, at 7 p.m. The game will be broadcast live on Fox Sports Florida (FS-FL).

The Hurricanes return to Coral Gables after playing in the first men’s basketball game of the season broadcast by ESPN — a tough 72-68 loss at No. 19/19 Memphis, which tipped off at 11 p.m. CT on Monday.

The Eagles are also back on the hardwood after a challenging road game in which they lost in overtime at Oklahoma, 71-63, on Monday.

Miami went 12-4 at home in the BankUnited Center last season and has won 14 of its last 18 at home. Over the last four seasons, the Hurricanes have compiled a 39-10 (.796) record at home and are 69-27 (.719) at home in their seventh season under head coach Frank Haith — including nine wins over ranked opponents. The Hurricanes have notched double-digit home wins at the BankUnited for three-straight seasons and six times in seven full seasons calling the arena home.

With a busy non-conference slate that will have the Hurricanes playing four games over the next eight days (Fri. vs. NCCU, Sun. at Rutgers, Wed. vs. McNeese State and Sat. at Florida Gulf Coast), Miami leaves for its next opponent immediately after Friday’s game. The Hurricanes will take on former Big East rival Rutgers on Sun., Nov. 21 on the road — the first of two games versus Big East opponents over the next two weeks. The game will be broadcast in the New York market on SNY and in the Philadelphia market on The Comcast Network (TCN). It will not be televised in South Florida.

In the meeting between the programs last season, Adrian Thomas scored a career-high 16 points to lead Miami to the 83-53 win over North Carolina Central in UM’s 2009-10 season opener. Durand Scott dished out a season-high 10 assists — with zero turnovers — in his debut to steer the Miami offense. It was the most assists by a Hurricane in exactly three years, since Anthony Harris finished with 10 assists versus Alcorn State on Nov. 14, 2006. Thomas shot 6-for-9 from the field, including 4-for-7 from the 3-point line, while Dwayne Collins finished with 12 points and six rebounds for Miami. The Hurricanes pulled away with a 14-2 spurt in the final 4:42 of the first half. Julian Gamble scored six-straight points during the run, including a fast-break dunk for Miami’s first double-digit lead at 36-25 with 1:25 left in the half. Gamble was Miami’s third scorer in double figures with 10 points in 14 minutes. The Hurricanes extended their lead to 20 points early in the second half and would lead by as many as 33 points. Vincent Davis led the Eagles (0-2) with 16 points.

Earlier this week, the University of Miami men’s basketball team hit the road for the first time this season, kicking off ESPN’s third annual College Hoops Tip-Off Marathon at No. 19/19 Memphis on Mon., Nov. 15, at midnight. Although Durand Scott, Malcolm Grant and Reggie Johnson combined for 50 of Miami’s 68 points, it wasn’t enough as the Hurricanes fell, 72-68.

Grant added 18 points for the Hurricanes (1-1) — including a key three-pointer late in the game. But they also got stellar play from Johnson, who finished with his first career double-double of 12 points and a career-high tying 12 rebounds despite battling foul trouble all night.

Miami shot only slightly better than Memphis (33 percent), but dominated the boards, 51-31, including 23 off the offensive glass. That +20 rebounding margin is the largest for the Hurricanes since they led 55-31 on the glass in a win over Florida Atlantic on Dec. 19, 2009. Those 23 offensive boards are the most for UM since registering 24 in the game versus the Owls.

The starting backcourt of Durand Scott and Malcolm Grant continue to lead the Hurricanes offense. The duo combined to score 38 of Miami’s 68 points at No. 19 Memphis and scored 43 of the Hurricanes’ 89 points on 15-of-26 shooting versus Jacksonville.

Friday’s game versus North Carolina Central will mark the 99th career appearance for sixth-year player Adrian Thomas. He is on track to become the 34th Hurricane all-time to play in at least 100 games. Former teammates James Dews (2006-10) and Brian Asbury (2005-09) hold the Miami program record for career appearances with 130 apiece. Should Thomas play in every game during the regular season, he will tally 127 appearances with an opportunity to break the record with an extended postseason.