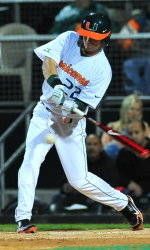 Miami (41-17) jumped out to a big lead early on, scoring six in the first, one in the second, one in the third and three in the fourth before eventually picking up the four-run win. The Hurricanes will now play No. 2 seed Texas A&M Saturday at 4 p.m. Left-hander Chris Hernandez (8-3, 3.02 ERA) is slated to start for the `Canes while Texas A&M will counter with righty Ross Stripling (6-3, 3.80 ERA).

Harold Martinez, Michael Broad and Chris Pelaez all hit three-run homers for the Hurricanes, while Scott Lawson added a solo shot to tie Miami’s highest single game home run total of the season. Pelaez finished the day 3-for-5 with four RBI and two runs scored, Martinez went 2-for-4 with three RBI and two runs, while Broad went 2-for-2 with a career-high tying four RBI. Lawson (2-for-4, three runs), Nathan Melendres (2-for-5, two runs) and Stephen Perez (2-for-4) also finished with multiple hits for the `Canes.

After Miami jumped out to an 11-0 lead after four, a weather delay in the sixth halted play for just over an hour. When the two teams came back out to finish the game, Dartmouth rallied, scoring two in the sixth, four in the eighth and two in the ninth – but closer Daniel Miranda preserved the win in the end.

Eric Whaley started for the `Canes and pitched well, allowing just two hits and no runs while striking out four in four innings. Reliever Joe Lovecchio (1-0) earned his first career win in just his third appearance this year, allowing five runs in 3 1/3 innings. Steven Ewing, Taylor Wulf and Miranda went the rest of the way for the Hurricanes.

Miami plated six runs in the first on the three-run homers by Martinez and Broad before getting another run in the second on a deep solo shot to right by Lawson. An inning later, UM scored its eighth run on a Broad RBI single.

UM was at it again in the fourth when Pelaez blasted the Hurricanes’ third three run homer – this one a shot down the line in right – to give the `Canes a comfortable lead.

Joe Sclafani and Sam Beam both had big days at the plate and helped Dartmouth rally after the rain delay. Sclafani finished the night 2-for-5 with two homers, three RBI and two runs scored while Bean went 4-for-5 with a pair of runs.

Dartmouth will face No. 3 seed FIU in an elimination game Saturday at noon.