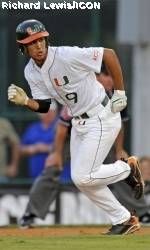 The `Canes, who won 3-1 on Friday night behind a complete game two-hitter from Chris Hernandez, improved to 4-1 in league play and 13-5 overall with the eight-run win Saturday afternoon. UM will look for the series sweep Sunday at 1 p.m. in the series finale.

Harold Martinez led the `Canes at the plate, finishing the day 3-for-4 with three RBI and two runs scored. For the second time on the weekend, he homered over the famous “Blue Monster” in left – bringing his team-high homer total to six on the year. Scott Lawson also had another big day at the plate, going 3-for-5 with three runs scored while Zeke DeVoss and Yasmani Grandal each has a pair of hits.

UM starter Jason Santana (2-1) picked up his second win in league play, allowing three runs on six hits while walking one and striking out five in 5 2/3 innings. It marked the eighth straight start a weekend starter for Miami allowed three earned runs or less and the 14th time in 16 starts overall this season. Relievers Daniel Miranda and David Gutierrez went the rest of the way for UM, combining to allow just one hit while striking out three over the final 3 1/3 innings.

Stephen Perez single-handily scored Miami’s first run in the top of the first. After walking, Perez stole second and then after successfully stealing third, came home on an error by third baseman Eric Brady as the Blue Devils tried unsuccessfully to throw him out at third.

Duke went ahead with a pair of runs in the bottom of the second. After a double and infield single put runners on the corners with one out in the second, a fielder’s choice grounder by Stroman brought home Eric Brady for Duke’s first run. After a hit-by-pitch put runners on first and second with two outs, a bloop single by McCurdy brought home Stroman to give the Blue Devils their first lead.

The `Canes re-took the lead the following inning, scoring five runs on six hits to take a 6-2 lead. After DeVoss doubled and Perez moved him over on a sacrifice bunt, Lawson’s infield single to short brought DeVoss home to tie it up. Grandal then followed with a single to left to put runners at first and second before Chris Pelaez hit a bloop single to right to score the go-ahead run. The rally continued for the `Canes when Martinez smack a run-scoring double down the line in right before Michael Broad followed with a two-run single to right.

Piwnica-Worms hit a solo homer over the big wall in left in the bottom of the third to get a run back for the Blue Devils, cutting UM’s lead to 6-3.

Miami added to its lead in the seventh, scoring a pair of runs on a Grandal RBI single and a double-play ground out to second, before scoring three more in the ninth – capped off by Martinez’s two-run blast to left.