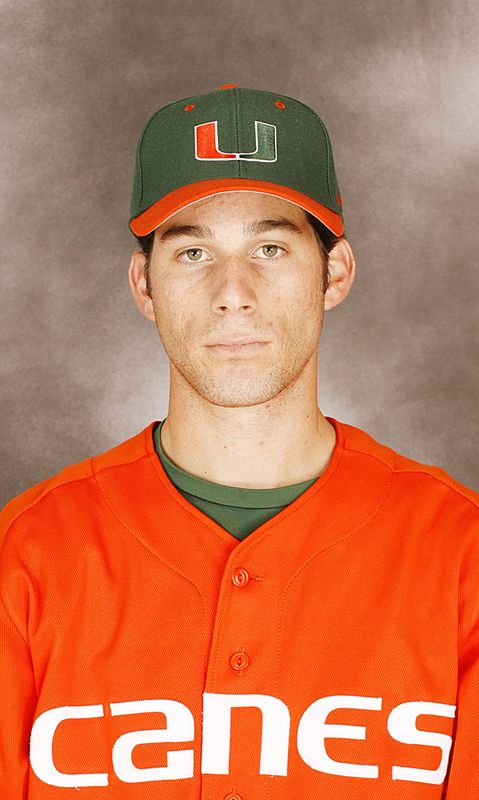 BIOGRAPHICAL NOTES
After splitting time between starter and reliever as a sophomore in 2008, spent most of the 2009 season as Miami’s Saturday starter … Has more total appearances (62) and relief appearances (42) than any other pitcher on the UM staff … Will likely move back to the bullpen in 2010 and is expected to replace departed All-America right-hander Kyle Bellamy in the closer spot … Is 11-6 with a 4.33 ERA in his career … Entering this year, has logged the second-most career innings (168.1) of any pitcher on the staff … Has command of three above average pitches … Younger brother of former UM pitcher and current Minnesota Twins prospect Carlos Gutierrez.

JUNIOR SEASON – 2009
Owned the staff’s lowest ERA (4.38) among hurlers who tossed at least 50 innings
Ranked second on the team in innings pitched (72), third in games started (13) and fourth in strikeouts (55).
Was the only Miami hurler to toss a complete game during the season, recording a career-high eight strikeouts in a seven-hit shut-out of Jacksonville on May 30 at the NCAA Gainesville Regional
Did not allow a run in 11 total innings of work at the Gainesville Regional
Spent most of the season as Miami’s Saturday starter
Went 3-1 with a 1.89 ERA in seven outings against non-conference foes
Allowed just three earned runs in his first five starts (30 2/3 innings)
Set new career-highs for starts (13), innings pitched (72) and strikeouts (55)
Lasted at least five innings in each of his first six starts
Had staff’s best strikeout-to-walk ratio (1-to-4.5) against non-conference opponents, striking out 27 while walking just six
Made his only three relief appearances late in the season, allowing two earned runs in a combined 7 1/3 innings versus Georgia Tech (5/20), Boston College (5/22) and Jacksonville (5/29)
Opponents hit .265 against him on the year

SOPHOMORE SEASON – 2008
Started seven games and came out of the bullpen on 10 occasions
His 17 appearances were tied for fourth on the staff, along with P.J. Fisher and Enrique Garcia
One of three UM pitchers to record at least five wins without suffering a defeat (5-0)
One of five Hurricane pitchers that tossed over 50 innings (53.0) on the season
Recorded a season-high five strikeouts twice (FGCU – 4/8, North Florida – 5/13)
Held opponents scoreless in five of 10 relief outings
Earned only save of the season against Wake Forest (3/21), allowing one run on two hits while striking out four in three innings of work in Coral Gables
Longest ’08 outing: 6.0 innings (FIU – 4/2, GT – 4/13, North Florida – 5/13)
Won only ACC regular season start at Georgia Tech (4/13), allowing two earned runs on five hits while striking out four in six innings of work
Only member of the pitching staff to start and come out of the pen at the ACC Tournament, earning the start against Virginia in the championship game (5/25) three days after a relief appearance against Georgia Tech (5/22)
Earned the win in UM’s victory over Arizona in game two of the Coral Gables Super Regional (6/7), allowing two earned runs while striking out three in four innings of relief work
Tossed just three wild pitches in 53 innings of work
Opponents stole just two bases on seven attempts against him (.286) – ranking him as the most efficient pitcher on the staff in limiting opponents from stealing bases
Lasted at least one full inning in 16 of 17 appearances and at least three innings in 10 of 17 outings
Four of his five wins, 39 of his 53 innings and 28 of his 40 strikeouts came against non-conference opposition
His 39.0 innings in non-conference play ranked second on the staff to only Chris Hernandez (45.1)

REDSHIRT FRESHMAN SEASON – 2007
Appeared in 29 games for the Hurricanes, striking out 26 in 43.1 innings of work
Picked up wins against No. 11 UCLA (2/10) and at FIU (4/11)
Spent the latter part of the season as Miami’s set-up guy out of the bullpen to closer Danny Gil
Made first career appearance against Mercer (2/3)
Appeared in two of Miami’s three games at the Columbia (Mo.) Regional (6/1-3), allowing just one run in 3.2 innings in the regional
Appeared in games against No. 19 Clemson and No. 3 Florida State at the ACC Tournament (5/23-27), striking out three and holding the opposition scoreless in 2.1 innings of work
Made two appearances in the series against Florida State (4/27-29) and did not allow a run in 2.2 innings of work against the top-ranked Seminoles in Coral Gables
Appeared twice in the Virginia Tech series (4/20-22) and matched a then-career high with three strikeouts in 1.2 innings in the series opener against the Hokies
Appeared twice in the NC State series (4/13-15), striking out four on the weekend including a then-career high three in two innings of work in the series finale
Tossed two innings and allowed two runs on two hits in his second decision of the season at FIU (4/11)
Appeared twice in the Georgia Tech series (4/6-8) and had a season-long 3.1 inning outing in the series finale in an 8-7 win.
Allowed just one run in four innings pitched on the weekend against No. 1 UNC (3/9-11)
Pitched one scoreless inning in relief in earning his first collegiate win – a 1-0 shutout of No. 11 UCLA (2/10)

FRESHMAN -2006
Red-shirted and did not pitch

PERSONAL
Son of Katherine and Rafael Gutierrez
Has one sister, Marili, and one brother, Carlos, a former UM pitcher
Majoring in Criminology