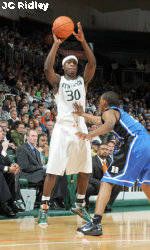 GREENSBORO, N.C…The University of Miami men’s basketball team will face Wake Forest in the first round of the ACC Tournament on Thurs., March 11, at 2 p.m. in the Greensboro (N.C.) Coliseum.

The game between Miami and Wake Forest is the second of the tournament and will tip approximately 20 minutes following the conclusion of game one – somewhere between 2 and 2:30 p.m. on Thursday.

The winner of the Miami-Wake Forest game advances to the ACC quarterfinals to face fourth-seeded Virginia Tech (23-7, 10-6) on Friday around 2 p.m. The Hokies, along with the other top-four seeded teams, receive a first-round bye. The Hurricanes have advanced past the opening round of the ACC Tournament in three of the last four seasons.

Miami freshman guard Durand Scott was named to the ACC All-Rookie Team and earned his UM-record fourth ACC Rookie of the Week accolades on Monday.

Miami’s first-ever All-Rookie Team pick, Scott posted two of the league’s top-five scoring performances and the top-three assists performances by a freshman in 2009-10. In addition, the New York City-native is the only ACC rookie to rank among the top-six freshmen in scoring (third with 9.8 ppg), rebounding (sixth with 3.9 rpg) and assists (first with 3.5 apg). His 11.2 points per game versus ACC opponents ranks second-most among conference freshmen and 20th among all ACC players.

The Hurricanes have produced an all-conference player in all six years under head coach Frank Haith.

Miami and Wake Forest split the series this season, with each team winning at home. The Hurricanes knocked off the Demon Deacons, 67-66, at the BankUnited Center on Jan. 9, and then fell in Winston-Salem, 62-53, on Feb. 2. Wake Forest leads the all-time series, 8-3, however Miami has won two of the last three meetings between the teams.

Dwayne Collins averaged a team-high 14.0 points and 6.5 rebounds over the two meetings for Miami — converting 68.8 percent from the field, while Durand Scott added 9.5 points, 4.0 rebounds and 2.5 assists per game.

In the 67-66 Miami victory in the teams’ first meeting this season on Jan. 9 in Coral Gables, Collins had a season-high 23 points and 11 rebounds to get UM off to its best start in 50 years and into the Top 25. Malcolm Grant added 14 points and six assists, while Scott contributed 10 points. But it was James Dews‘ putback with 30 seconds left that put the Miami ahead to stay, 67-66.

In Miami’s loss at Wake Forest on Feb. 2, freshman Garrius Adams knocked down a career- and game-high 13 points, including three three-pointers.

UM’s last four losses at Wake Forest were by an average of 4.3 points per game.

Wake Forest, who snapped a four-game skid with Sunday’s 70-65 win over Clemson, is led by three players in double-figure scoring. Al-Farouq Aminu (All-ACC Second Team) averages 15.9 points and an ACC-best 10.8 rebounds per game, but was limited to 7.5 points per game on 23.5 percent shooting from the field in the two meetings with Miami. Ishmael Smith (All-ACC Second Team) adds 13.3 points and 6.0 assists per game — second-best in the conference — in a league-high 36.7 minutes an outing, while C.J. Harris  (ACC All-Rookie Team) contributes 10.0 points per game, while converting a team-high 84.2 percent from the charity stripe.

Converting 41.8 percent from beyond the arc this season, Adrian Thomas leads the ACC in three-point field goal percentage and has hit a three-pointer in 23 of the last 24 games, including in eight straight to tie for the fourth-longest active streak in the ACC.

It marks the second-straight season and the third time in the last four years, Miami has had the league’s most accurate three-point shooter. Two-time First Team All-ACC pick Jack McClinton led the conference in 2008-09 and 2006-07 and was the second most proficient shooter in 2007-08, closing his career as the ACC’s all-time leader in three-point field goal percentage (.440).

Former Hurricane Will Allen is among 12 former basketball players that have been selected to the 2010 ACC Tournament Legends class that will be honored at this year’s ACC Men’s Basketball Tournament in Greensboro, N.C. UM’s first African-American basketball player who led UM in scoring and rebounding in 1971, Allen (1969-71) closed his career sixth on the Miami career scoring list (1,293) and second in career rebounds (913), averaging 17.2 points and 12.2 rebounds per game for his 75-game career, topping the 20-point mark 28 times during his three years at UM.

A 1971 graduate, he was drafted in the fourth round of the NBA Draft by the Baltimore Bullets and in the 12th round of the ABA Draft by the Miami Floridians. He played one season for the Floridians, and then played professionally in Belgium for five seasons. He co-founded Growing Power in 1995, an organization which brings farming skills, healthy food and a sense of community to urban residents, going on to earn a genius grant from the MacArthur Foundation in 2008. Since his retirement from basketball in 1977, he has resided in Milwaukee, Wis.