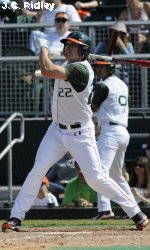 CORAL GABLES, Fla. – Junior right fielder Chris Pelaez continued his hot hitting going 3-for-3 with three runs scored and junior lefty Eric Erickson struck out nine in another solid start as the 10th-ranked University of Miami baseball team knocked off Manhattan, 7-3, Friday night at Alex Rodriguez Park. Freshman left fielder Michael Broad drove in two runs – including what proved to be the game-winner – and finished 2-for-3 on the night.

Pelaez, who went 8-for-11 last weekend against Rutgers, has now gone 11 for his last 12 going back to his last at-bat in the season-opener. Erickson struck out nine batters, allowing three runs on four hits in six innings of work in the no decision. He was impressive early on, striking out five of the first six batters he faced. Iden Nazario (1-0) won his first game of the season as he pitched 1 2/3 scoreless innings in relief and struck out two. Senior closer David Gutierrez picked up save No. 2 as tossed the final 1 1/3 inning.

With the score tied 3-3 in the bottom of the seventh, the `Canes scored a pair runs with the bases loaded on a single by Broad and a fielder’s choice grounder by Stephen Perez to give Miami a 5-3 lead.

Miami took the 7-3 lead in the bottom of the eighth as Harold Martinez doubled in David Villasuso, who walked to lead off the inning. Zeke DeVoss’ RBI triple later plated Martinez for UM’s final run of the night.

Miami got on the board first, jumping out to 2-0 lead in the second. Pelaez led off the inning with a single to center and after a sacrifice bunt and a strikeout, Broad and Nathan Melendres hit nearly identical back-to-back triples to left-center to give the `Canes the early advantage.

Manhattan quickly got those two runs back with solo home runs in each of the next two innings, as Murphy homered to left in the third and Chad Salem hit one to straight-away center in the fourth.

Pelaez re-gained the lead for Miami with a towering solo homer to right to lead off the bottom of the fourth.

Just as they had done two innings prior, the Jaspers quickly tied it back up – this time with an Austin Sheffield RBI single through the right side.

Martinez (2-for-3, two runs scored) and Yasmani Grandal (2-for-5) also finished with multiple hits for UM.

Game two of the series will be played Saturday night at 7 p.m. Miami will send lefty Chris Hernandez (0-0, 2.25) to the mound while Manhattan will counter with right-hander Tom Costigan.